Bahrain Report: The State of The Prisons 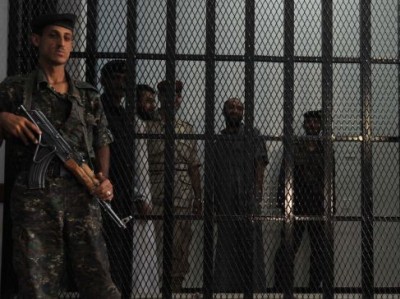 The Bahrain Center for Human Rights and the Bahrain Youth Society for Human Rights have published a report outlining the state of prison conditions in the Kingdom, which has the largest per-capita population of detainees in the Middle East.

The report was prepared for a side event for the UN Human Rights Council’s 26th regular session in Geneva.

The BCHR has documented thousands of arbitrary detentions, the majority of which have been subjected to enforced disappearance and a long list of human rights violations, many of them including torture. Most detainees report that they were subjected to systematic torture to extract false confessions and subsequently denied access to adequate medical treatment.

The authorities in Bahrain are desperate to prevent knowledge of these violations from emerging from the prisons. Last summer, the lawyer Abdulaziz Mosa tweeted that he saw marks of torture on the body of his client who was being held at the CID; just hours after making this statement, the lawyer himself was arrested.

There is a lack of transparency in terms of the conditions to which prisoners are subjected. Few international organizations have been allowed to make prison visits, and in such cases, their schedule is tightly controlled. The government has denied access to all independent local human rights organizations. The government-established National Institute for Human Rights and the Ministry of Interior’s Prisons Ombudsman have received numerous complaints over the last year and a half, but these complaints have not resulted in any significant improvement in prisoner conditions. The prison population continues to swell in size, and the prisoners are trapped in an unjust system without any possibility of relief.

The NGOs who collaborated on this report have worked together closely with both current and former detainees to recreate a complete image of what life is like behind bars in Bahrain. As the international community reviews the government of Bahrain’s largely superficial reforms, the voices on the following pages –– the voices of those who truly know the extent of the government’s brutality –– must be heard and taken into consideration.

An anonymous prisoner explains: “I was subjected to the most horrendous types of physical and psychological torture at the CID… like: being suspended vertically, electric shocks, simulated drowning, severe beatings, deprivation of sleep and forced to stand for long hours.”