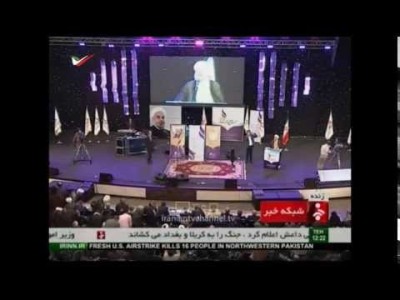 While others were watching the nuclear issue and the sudden crisis in Iraq, some Iranians had another long-standing interest to pursue this week.

Those people wanted to make sure that people remembered opposition leaders Mir Hossein Mousavi and Mehdi Karroubi, held under strict arrest since February 2011 — and they were willing to interrupt a speech by President Rouhani to make their point.

The President was speaking on Thursday, the anniversary of his election, and was trying to push back his hardline critics on the cultural front:

What have we said that made some angry? We cannot force the cultural issues upon people but unfortunately it seems that some people are still living in stone ages. They should know that they are only a minority in Iran and even though they are respected yet they cannot make decisions for the majority.

What Rouhani may not have expected was a challenge to another of his campaign promises, the freeing of political prisoners.
Some in the audience interrupted him, “Greeting to Rouhani, Peace be upon Mousavi”, “Hail to Hashemi, Hail to Khatami” (former Presidents Hashemi Rafsanjani and Mohammad Khatami), and “The political prisoners must be freed.”

The President looked disconcerted as the chair appealed for the demonstrators to be quiet, to applause from some in the audience.