Iraq Special: Did the al-Maliki Government Abandon Mosul — and Why? 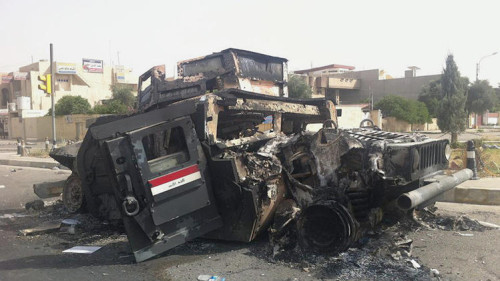 The prevailing narrative of last week’s dramatic victories by Iraq’s insurgency, including the takeover of the cities of Mosul and Tikrit, is they were the outcome of a crumbling of the Iraqi security forces.

For example, US analyst Kenneth Pollack wrote on Saturday:

It is not surprising that the Iraqi Security Forces (ISF) would crumble in those areas. As Baghdad has (rightly) observed, several of the divisions in the north were disproportionately composed of Kurds and Sunni Arabs, many of them frustrated and alienated by Prime Minister Maliki’s harsh consolidation of power and marginalization of their communities. They were never going to fight to the death for Maliki and against Sunni militants looking to stop him. Similarly, the considerable number of Shia troops in the north understandably saw little point to fighting and dying for principally Sunni cities like Mosul, Tikrit, Bayji, etc.

However, as Iraqi soldiers who were not killed, captured, or executed by the insurgents are interviewed, an alternative story is being told. Defeat from Mosul to Tikrit was not because of the failure of troops to make a stand, but because commanders — allegedly on orders from Baghdad — lay down arms and retreated.

Amir al-Saadi, a soldier who was in Mosul and is now re-deploying Samarra, asserts:

The army withdrew from Mosul and that withdrawal is the responsibility of the senior commanders. The officer in charge was sitting in his office when I came in with some other soldiers. He told us he had received orders to withdraw from the city as quickly as possible. When he said that, we really thought he was joking. But he wasn’t. So we went out and told the others about the orders. That was when we started leaving the base, after changing out of our uniforms into civilian clothes.

Another soldier, Mahmoud Fahd, echoes, “We are not deserters. Our commanders abandoned us while we were sleeping at night, and fled by helicopter. When we woke up in the morning, there were no [military] officials at the post. Our officers told us to put on civilian clothes and return to our families.”

Khudair Mahdi, a police captain, said that after days of clashes with insurgents, “on Monday evening we received news that there was some kind of problem on the western side of the city — insurgent attacks on the headquarters of the Nineveh Provincial Council and security forces:

So we waited for news. Late on Monday night we got orders to leave our headquarters. Our senior officers told us that we could choose to withdraw with our weapons, vehicles and equipment or that we could leave it all behind. The majority of us choose to leave without taking anything….

We were ordered to empty all premises held by security forces. But we were not told where to withdraw to.

So if the stories are true, why did Iraq’s commanders — with forces vastly outnumbering the insurgents — suddenly surrender and withdraw?

One clue may lie in the revelation that senior commanders arrived in Mosul on Monday night. They included the Iraqi Army’s Deputy Chief of Staff, Abboud Qanbar, the commander of Iraq’s land forces, Ali Ghaidan, and the head of the Ninevenh Operations Command, Mahdi al-Ghrawi.

Those commanders reportedly left Mosul on Tuesday before its fall. They went to Kirkuk, where they handed over responsibility for the city to Kurdish forces.

Hussein Zeidan, with the Army’s 2nd Division, accuses Ghaidan and al-Ghrawi of “ordering officers to abandon their posts, …(leaving) troops stranded in Mosul without orders”.

Allies of Iraqi Prime Minister Nuri al-Maliki have suggested that Mosul was lost because of betrayal by Sunni and Kurdish elements, with local politicians — the Governor of Nineveh Province is the brother of the Sunni Speaker of Parliament — and commanders handing over Mosul to insurgents.

That claim of an effective mutiny would seem to be undermined, however, by the appearance of the Iraqi Army’s top men in Mosul. Did they really that there were almost no forces who would fight, leaving only the option of capitulation?

The alternative is that the Government decided for some reason to give up Iraq’s second city, with a population of more than 2 million.

Did it do so because it struck a deal with other factions? And, if so, whom?

Or did Prime Minister al-Maliki and his entourage determine that Mosul and then Tikrit were “lost” — or that their forces, despite vast advantage in resources and men, would take unacceptable losses — and that they would make a stand more than 100 miles away, north of Baghdad?

Here’s another curiosity to ponder….

This weekend, Iraqi officials put out the story through The Guardian of London of a supposed success against the Islamic State of Iraq and as-Sham just before Mosul fell.

Acting on information from an ISIS courier who “finally cracked after a fortnight of interrogation”, Iraqi forces killed the head of ISIS’s Military Council and captured documents on 160 computer flash drives.

The Iraqi security forces say that they now had the “names and noms de guerre of all foreign fighters, senior leaders and their code words, initials of sources inside ministries, and full accounts of the group’s finances”, with assets of more than $875 million.

Yet, with this haul of intelligence, the same Iraqi security forces apparently could do nothing to hold off their adversary. Instead, The Guardian highlights the warning of the interrogated courier, “You don’t realise what you have done. Mosul will be an inferno this week.”

Neither The Guardian nor its sources answer the question: were the Iraqi Government and its forces powerless before the inferno? Or did they help feed it?