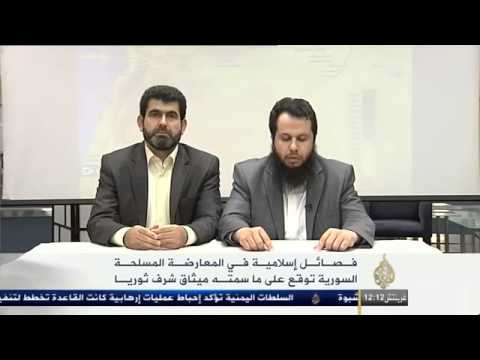 The Islamic Front, Syria’s largest insurgent bloc, and other factions have issued a Revolutionary Covenant setting out political and military principles.

The Covenant declares a commitment to a fight not only against the Assad regime but also the Islamic State of Iraq and as-Sham. It promises respect for human rights and the pursuit of “a state of law, freedom, and justice, without any sort of pressure or dictatorship” for all Syrians, including ethnicities and minorities.

Revolutionary forces are fully aware of the gravity of the current situation our blessed revolution is going through, and in the pursuit of unifying efforts and joining forces within a common framework that serves the interests of the Syrian people, these forces confirm their commitment to the following:

Verily we call upon all other revolutionary forces on Syrian territory to sign this covenant in order to be one hand in our struggle to topple the regime.

This covenant signed by: