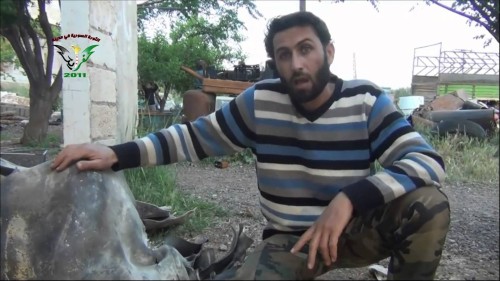 More videos were posted on Wednesday seeking to establish the Syrian military’s chemical weapons attacks on Kafrzita in Hama Province last weekend, calling on the international community to investigate.

In one video, two men show the remnants of a cylinder, alleged to have carried chlorine gas and to have been placed inside a barrel bomb, and appeal:

For all the world, if you want to prove the Assad crimes [and use] of chemical bombs, we have good proof, excellent proof. Come to us, come to Kafrzita, and we will show you all the proof about Assad’s crimes.

In another clip, a medical worker laments, “They attack us…in chlorine…in gas chlorine. Now in the middle of our city they attack and many person have toxic injuries. What will we do? Every day, every day they attack our city.”

Local activists and doctors say at least three people died and 200 were injured in five attacks last Friday and Saturday. They claim Syrian forces struck after they failed to capture Morek, 9 kilometers (5.5 miles) away. The Syrian military has also been blocked in Hama Province from sending reinforcements to Aleppo, where they are facing a two-front insurgent offensive threatening to cut off Syria’s largest city.

Syrian forces have also been accused of using “poison gases” over the last three weeks in attacks on insurgent-held Damascus suburbs including Harasta, Darayya, and Jobar.

As insurgents close on Aleppo from the northwest and south, analyst Elijah Magnier reports fighting across Syria’s largest city:

There are also reports of explosions at the regime’s Hanano base. 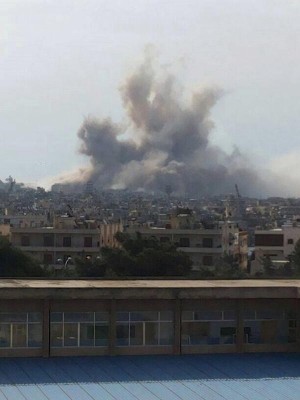 Video posted on Wednesday of insurgents fighting in Zahraa in northwest Aleppo:

Syrian military footage celebrates its attempt to claim control of all of Homs, focusing on attacks on the Jouret al-Shayah area:

An opposition activist denied reports that the Syrian military seized 15 buildings in the Old Homs neighborhoods of al-Hamidiyeh and Jourat al-Shayah on Wednesday.

While the opposition holds most of Idlib Province since 2012, Syrian forces have maintained their hold over the main city.

Oil Minister: Production Down 96% Since March 2011

Oil Minister Suleiman Abbas has said that production is only 4% of the level in March 2011, at the start of the Syrian uprising.

Abbas announced that oil prices would rise, despite a State subsidy, to 120 Syrian pounds ($0.82) per liter, more than 2 1/2 times the pre-conflict cost.

The Russian Foreign Ministry said, “Confrontation between government forces and the armed opposition in Syria has been dangerously escalated with media reports saying that 20 US anti-tanks missile systems of TOW were delivered to gunmen by western sources, among them the Hazm Movement.”

The Ministry expressed “deep concern” over the possibility of “terrorists” using the anti-tank missiles against civilians.

An opposition official confirmed the delivery of the TOW missiles to insurgents whom he said have used them in offensives in Idlib, Latakia, and Aleppo Provinces. The statement followed the appearances of videos of missiles in the hands of at least three insurgent factions.

See At Least 20 US-Made Anti-Tank Missiles in Hands of Insurgents — More to Come?

A house burns as fighting continues in Mleha, east of Damascus:

The Syrian military has been trying for weeks to clear insurgents from Mleha and other towns in the East Ghouta area near the capital.