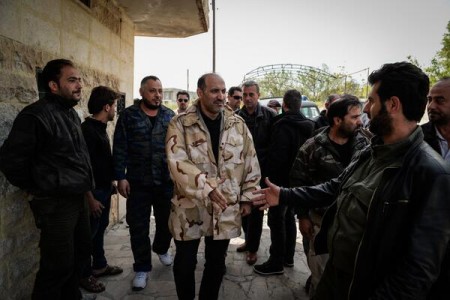 Jarba toured the village of Kassab and hilltops, taken by the insurgency in their 12-day offensive, to publicize the success of “liberation” from the Assad regime. He was accompanied by provisional Defense Minister Assad Mustafa.

The visit highlighted the capture of Kassab, near the border post taken by insurgents — the last one the regime held on the Turkish frontier — and countered regime propaganda of a counter-attack which would drive out the “terrorists”.

It also was a mission to bolster Jarba’s authority and that of the Coalition, after recent tensions with insurgent factions and a month after a dispute over the removal of General Salim Idriss as head of the Supreme Military Council.

Meanwhile, insurgents continued to hold Tower 45, the hilltop observatory overlooking Kassab and other villages in northern Latakia Province, despite State media’s claims of regime victory in re-taking the position.

Opposition fighters claim they have advanced along the Mediterranean coast as far south as the outskirts of Ras al Basit:

The Syrian military has been carrying out airstrikes across Daraa Province, where insurgents have been gaining ground.

Fighting in Jobar Section of Damascus

Reports are circulating of fighting, the heaviest in weeks, in the Jobar section of Damascus.

Insurgents from Damascus suburbs with local ceasefires are said to have joined colleagues in the area:

Claimed footage of a strike on a building with Assad loyalists:

The Legion has also put up footage of the firing of rockets in the Latakia offensive.

Abdalmajid Katranji, a Syrian-American surgeon who has made several trips into the country — the latest in January — tells Syria Deeply:

You’ve got two categories of medical workers. You’ve got the Syrian volunteers, and the psychological state they’re in is one of resilience, but at the same time, untreated or rapid coping, in the sense that they haven’t had the chance to process what they’ve seen every single day. They throw themselves into it harder and harder, because if they do pause or let up, they won’t be able to start again. There’s a great sense of hopelessness.

With the other group, foreign aid workers, it’s shock – they go in to do what they do [at home] and they come out having seen things with their eyes that human eyes were not meant to see. They’re dealing with severe psychological trauma and coping with a medical system that doesn’t appropriately address the refugee situation.

We’ve become quite creative in how we rebuild tissues. One time we ran out of instruments, and we didn’t have what we needed. So we went down to the local mechanic shop and found tools, sterilized them and used them. They’re not as delicate as ours, but pliers are pliers, and a wrench is a wrench, and we used them to remove shrapnel or screws or plates from other surgeries.