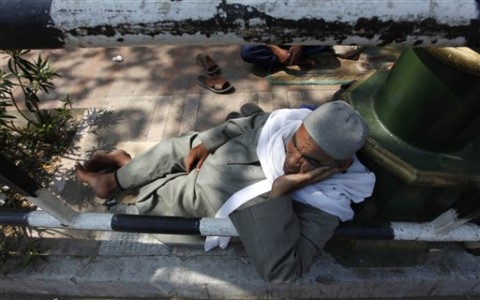 Steven Cook writes for the Council on Foreign Relations:

Egypt is experiencing a deep economic crisis. The country’s foreign currency reserves are less than half of what they were before the January 2011 uprising, threatening Egypt’s ability to pay for food and fuel. Egypt’s budget deficit is 14% of gross domestic product (GDP) and its overall debt, which is the result of accumulated deficits, is more than the country’s economic output.

In this difficult economic climate, roughly 45% of Egyptians live on less than $2 per day. Inflation, which reached as high as 12.97%t after the July 2013 military coup, is currently at 11.4%. Tourism revenue — traditionally a primary source of foreign currency along with Suez Canal tolls and remittances from Egyptians working abroad — is less than half of what it was in the last full year before the uprising. Foreign direct investment has dried up outside the energy sector. Unemployment remains high at 13.4%. Among the unemployed, 71% are between 15 and 29 years old.

This economic weakness makes it politically difficult to address the problems that contribute to a potential solvency crisis because the necessary reforms will impose hardship on a population that is already experiencing economic pain.

Despite these problems, the state of Egypt’s economy has received less attention since the July 2013 coup d’état because of an influx of financial support from Saudi Arabia, the United Arab Emirates, and Kuwait.

Yet Egypt’s economy remains shaky and the threat of a solvency crisis lingers. Indeed, the continuation of violence, political protests, and general political uncertainty—even after planned presidential and parliamentary elections—along with a hodgepodge of incoherent economic policies, all portend continuing economic decline. This in turn could create a debilitating feedback loop of more political instability, violence, and economic deterioration, thus increasing the chances of an economic calamity and yet again more political turmoil, including mass demonstrations, harsher crackdowns, leadership struggles, and possibly the disintegration of state power.