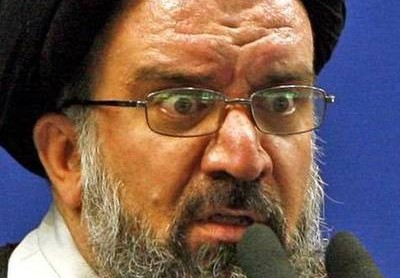 Interview: Why Rouhani Is Not Moving for “Press Freedom”

The Iranian regime, amid ongoing nuclear negotiations with the 5+1 Powers, is maintaining its proclamation of strength — the “resistance economy” can overcome any US-led sanctions, even if there is no comprehensive deal.

Khatami said the resistance economy, resting on Iran’s “indigenous science and technology”, is based on “justice”.

The Supreme Leader, who set out the line of “resistance economy” in August 2012, repeated earlier this week that the Islamic Republic’s “economic jihad” would be triumphant. He set out 13 objectives, including a surge in domestic production and non-oil exports, lower taxes, and a stable financial system.

The head of armed forces, General Hassan Firouzabadi, said on Friday that the Supreme Leader’s policies are a “road map for setting up an Islamic economy, and the most important feature of this economy is that economic progress comes hand-in-hand with social justice”.

Despite the declarations of triumph, Iran’s economy is still contracting after the decline in 2013 from mismanagement and sanctions. Senior Presidential advisor Mohammad Baqer Nobakht said this week that GDP was falling 2.0%, after last year’s drop of 5.8%.

The guards were seized by the Sunni insurgency Jaish ul-Adl in Sistan Baluchestan Province in southeastern Iran on February 6. Iranian authorities believe they were subsequently taken into Pakistan.

Jazayeri did not give details about how the release of the guards was arranged.

Iranian officials were in talks with Pakistani counterparts earlier this week in an attempt to resolve the abduction.

Rouhani to Military: Back Off Tough Anti-US Rhetoric

President Rouhani told military commanders on Saturday to restrain their tough rhetoric, amid the nuclear negotiations with the US and other powers:

“We must be very careful in our calculations. Launching missiles and staging military exercises to scare off the other side is not good deterrence, although a necessity in its proper place. A misfire could burst into flames and wreak havoc to everything.

In recent weeks, Iran’s military has carried out a series of exercises and warned the US that any attack on Tehran would provoke a response “with no boundaries”, destroying Israel and the American position in the Middle East.

At the opening talks on a comprehensive nuclear deal in Vienna earlier this month, Iran and the 5+1 Powers agreed to refrain from hostile statements that might unsettle the discussions.

Rouhani said on Saturday that Iran will not pursue a nuclear bomb:

We are not after weapons of mass destruction. That’s our red line,.

Rouhani continued, “Even if there were no NPT (Non-Proliferation Treaty) or other treaties, our belief, our faith, our religion and principles tell us not to seek weapons of mass destruction.”

The program, the flagship of Mahmoud Ahmaidnejad’s economic strategy, was supposed to bring in needed revenue from reduction of support for food, energy, and other goods. However, the support payments given to all families to offset higher prices have exceeded the revenues.

The Rouhani Government is now trying to limit eligibility for support payments to families below a certain level of income.

Jahangiri asked the public to give him feedback on the cut-off rate for receiving the cash benefits, set at $45 per person under Ahmadinejad.

The 1st Vice President said that only 50% of revenues from the cuts were supposed to be distributed in payment, with the other 50% for investment in the manufacturing sector, development, and health projects.

Ayatollah Ahmad Alamolhoda, the Friday Prayer Leader in Mashhad, warned the Government not to intervene over last week’s closure of the newspaper Aseman.

Alamoldhoda declared that Aseman has transgressed by claiming the legitimacy of the Baha’i faith, which has been repressed by the regime with many of its members harassed or imprisoned. He continued:

This matter means secularism will grow in moderation. One must ask whether this administration truly wants to be the bedrock of secularism.

The second matter is that atheists seek to tie the matter of human rights with political matters and affect the Vienna nuclear meetings. Is this administration indifferent to them? These are America’s mercenaries and want to act against the system’s expediency.

Aseman, which had only published for a week, was shut down by authorities over an article which examined the Islamic law on retribution against criminals. Its editors were detained and are now on bail awaiting trial.