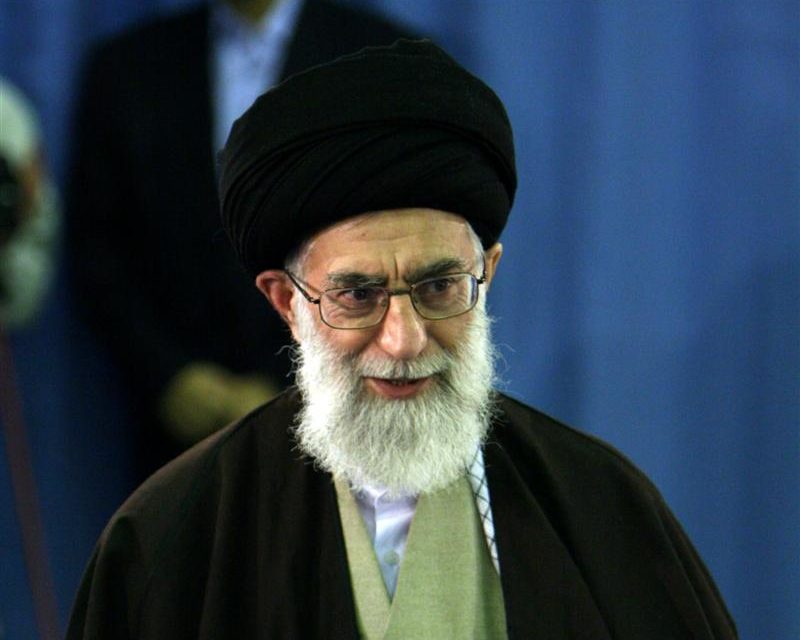 Under his slogan “resistance economy”, the Supreme Leader has called on the heads of the three branches of Government to co-operate for a quick solution of Iran’s economic difficulties.

If the comprehensive policies of economic resistance are pursued and implemented seriously, there is a lot of hope that economic growth and reforming the country’s economic foundations will be resolved in…fulfilling and resolving parts of the people’s problems.

“The trend of implementing the broad policies of economic resistance must continue as a constant and unstoppable movement until achieving results….

If implementing the broad policies of economic resistance necessitates setting aside some unfavorable laws, the Parliament must identify, and then eliminate them. Also, if implementing these policies require the elimination of some regulations…, the administration must undertake these measures by issuing resolutions.

In part, the Supreme Leader’s proclamation of a “resistance economy” — with emphasis on an increase indigenous production and exports — has been a defiant response to the threat of Western sanctions.

However, this week’s statements, putting forth a 13-point program, also appear to be a recognition of the extent of Iran’s economic difficulties, blaming the policies of the Ahmadinejad Government from 2005 to 2013.

Last September, to encourage the Supreme Leader to accept his economic approach and nuclear negotiations with the US and other powers, Rouhani presented Ayatollah Khamenei with a dossier detailing the critical state of the economy.

Although there has been some improvement in Iran’s position since then, with inflation falling from its level of more than 40% when Rouhani took office, the economy is still contracting. Senior Presidential advisor Mohammad-Baqer Nobakht said that, after a 5.8% decline in 2013, the Islamic Republic’s economy is shrinking by 2%.

The Rouhani Government has set a goal of near-zero growth by the end of the 2014/2015 Iranian year.

The President said on Tuesday, in a speech in southern Iran, that the chain of “unjust” and “cruel” sanctions on the Islamic Republic must be broken.

An editorial in the Islamic Revolutionary Guards Corps (IRGC) weekly Sobh-e Sadegh suggested that the Supreme Leader’s call for economic resistance was timed to highlight that the Rouhani administration’s negotiations with the P5+1 countries “will not lead to anywhere.”

It declared, “This is while preliminary agreements with the P5+1 have taken shape and these countries are in negotiations with Iran for a final agreement. The timing of issuing these broad policies bring this point to attention that hoping and waiting for them [administration] to overcome issues is not possible through the Foreign Ministry, and this strategy will not lead to anywhere. Also, it has been some time that the Supreme Leader has significantly emphasized reliance on the economy’s domestic and endogenous forces and factors.”

Economy Shrinks in First Half of (Persian) Year

As the Supreme Leader reiterates his call for “economic resistance,” the latest macroeconomic indicators for the first six months of the current Persian calendar year (March-September 2013) published by the Iranian Statistics Center show a poor performance in a number of sectors: -2% economic, -2.1% agriculture sector , -5.4% industrial sector, -0.6% services sector growth.

Some MPs were concerned by the meeting of a European delegation with two prominent “criminals of the [2009] sedition” last month in Tehran and the reason for Zarif’s “deviatory positions…regarding the bastard Israeli regime and the Holocaust.”

Committee members also asked why the Foreign Ministry did not take appropriate measures which have led to recent deaths of Iranian nationals abroad in recent terrorist attacks. The MPs later announced that none of Zarif’s responses convinced them.

41 MPs Write to Intelligence Minister About “Weakening” of National Security

NSFP Parliamentary Commission member Ghodousi announced that forty-one MPs have signed a letter to Intelligence Minister Hojjat al-Eslam Mahmoud Alavi detailing their concerns about “the weakening” of national security during the Rouhani administration.

In particular, the letter focuses on the administration’s “continued efforts to normalize relations with America by the Foreign ministry and the President, requesting public opinion polls for relations with America, calling the country’s defense power as weak and prevention of holding missile drills.”

Filmmaker Nourizad Claims He Was Beaten By Intelligence Ministry Agents

Mohammad Nourizad — filmmaker, writer, and former political prisoner — has claimed he was beaten by several Intelligence Ministry agents in front of the ministry’s building on Monday.

Nourizad was protesting the seizure of documents from his home during an investigation. He has been summoned to appear before a Revolutionary Court on Wednesday.

Nourizad was detained for several months after he wrote an open letter to the Supreme Leader asking him to apologize for the repression of protesters after the dispute 2009 election.

Since his release from prison, Nourizad has continued to challenge the regime over its crackdown and handling of political and social issues.

Trying to limit the cost of the subsidy cuts program, Economy Minister Ali Tayyebnia has said that support payments will now be given only to families who demonstrate financial need.

The Ahmadinejad Government, when it launched the flagship program in December 2010, authorized a monthly payment of $45 per person to cover price rises in areas such as food and energy.

The program has proven so expensive that some analysts say the support payments are greater than the Government revenues from the subsidy cuts.

Tayyebnia told reporters that applicants have until the end of the Iranian year (March 21) to file for the support payments.

Velayati said the missiles are essential for deterrence of military threats, while reassuring that Iran will never pose a danger to the security of any country.

As talks on a comprehensive nuclear deal opened in Vienna last week, Iranian officials made clear that the agreement must be strictly on nuclear facilities and uranium enrichment, rather than trying to cover the state of Tehran’s military capabilities.

Iran’s Ambassador to Iraq, Hassan Danayeefar, has denied that Tehran has signed a deal to supply arms and ammunition to Baghdad

Danayeefar said, “No agreement on military and arms cooperation has been endorsed with the Iraqi side thus far”.

The envoy declared that the Iraqi Government has not asked for the weapons; however:

If the Iraqis feel a need and make a request, we will study it to see if we will be able to supply with such cargoes or not.

If the Iraqi government raises any such demand to control and fight terrorism, which is every country’s duty responsibility today, we will be ready to consider it.