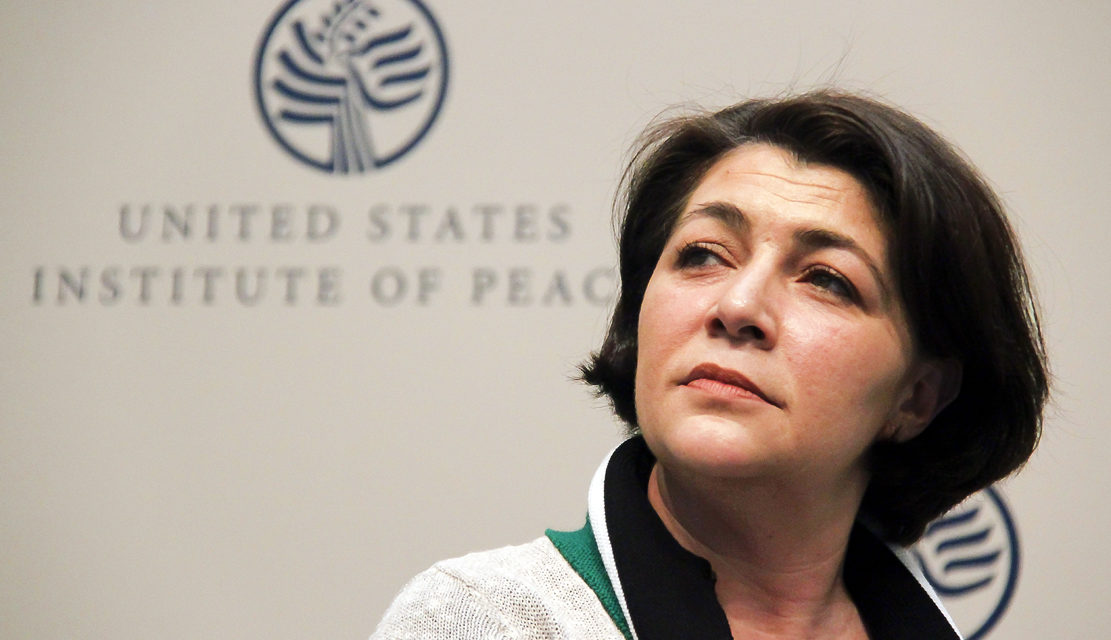 Rafif Jouejati, a member of the opposition delegation in the two rounds of the Geneva II talks on Syria, writes for Diplomacy Post:

When I joined the Syrian Opposition Coalition for the Geneva talks in late January, I was full of hope. I felt optimism and commitment to a political process that would ultimately lead to an end to the suffering of millions of Syrians. I was fully aware that a single round of talks would not convince Assad the war criminal to step down as president and end his reign of terror, but I felt that anything was a step forward. My hopes mirrored what the negotiators were expressing: this is the way, this is a solution, this will take time but it will ultimately be good. As a spokesperson for the SOC during Geneva 2, my job was to communicate our ongoing commitment and optimism for the future.

Our optimism soon was replaced by dismay as the Assad regime escalated its already brutal military attacks on civilians even while paying lip service to peaceful resolution. During the first round of Geneva 2 talks –– a period of just one week –– approximately 1,000 more civilians were killed by the regime’s now-infamous barrel bombs, shelling, torture, or starvation. As exploding bits of wooden barrel, nails, metal shards, and diesel fuel rained down on communities in Aleppo, Daraya, and Hama, I doubt very much that the residents felt hope or optimism for the future. Across Syria, dogs, cats, donkeys, grass, and leaves had become survival foods, and those were running out as fast as hopes were fading.

The Assad regime took every opportunity to stall; delay tactics are part of their expertise and certainly an integral part of any dictator’s modus operandi. The international community lamented the ongoing violence but was primarily focused on the Old City in Homs, where some 2,500 people were starving to death. Much less attention was paid to Yarmouk Camp, where more than 18,000 were suffering the same fate: forced starvation as a tool of war. This is a problem across Syria. In fact, this type of warfare is a war crime. It is not hyperbole to assert that the Assad regime is responsible for atrocities of genocidal proportion.

Nonetheless, at Geneva 2, ending the siege on Homs was a negotiation point on the table. The issue of civilians being starved to death by a dictatorial regime was nothing more than something to discuss and put off for another day. The world watched on as men, women, and children who had nothing to do with the political process were being starved by the blockade imposed by the regime. And so Geneva 2 became another slow dance of death that the Assad regime defended, justified, and continued to perpetrate through the farce of a political process.

The international community is complicit. By forcing a political dialogue, the world can shrug off the 150,000 dead, the 260,000 political detainees, the 9.5 million displaced or refugeed, and the other 9 million at risk of starvation. The world can look away as the dictator who wields chemical weapons and barrel bombs continues to create a special kind of hell for innocent civilians. As we continue to pursue the political process, the international community can afford to wash its hands of its own responsibilities to protect the innocent. While (United Nations mediator) Lakhdar Brahimi shows his own frustration at the lack of progress, average people need to try to imagine, even for a minute, what this must feel like for a child trapped under the rubble of a collapsed building, or a mother who cannot feed her newborn because she is dying her own death. That is the reality for Syrians today, not the imposing halls of the United Nations or the press conferences and cameras. The reality is a military siege of a civilian population, a Syrian Holocaust, not the empty words or negotiating tactics.

And yet the SOC remains committed to the political process. Because that is what the international community is demanding, and that is the only way for Syria to emerge from the hell the Assad regime has created in Syria. There is no other way to effectively form a transitional governing body that does not include Assad or his henchmen. There is no other way to ensure that what comes after the war criminal is better than another war criminal.

Ultimately, there will have to be an intervention of sorts. Not because humanity itself is at risk –– nobody in power seems to do more than give lip service to the atrocities –– but because Assad will continue his military escalation and ultimately cross yet another “red line”, one that cannot be ignored as so many other red lines have been. Perhaps that will be when every last Syrian is dead, when the country is completely and utterly destroyed, or when the fumes of Sarin gas reach populations outside Syria’s borders.

But until the world does more than quietly applaud “gains” (after all, some 80 people were evacuated from Homs –– bravo!), we will have to go through the motions of facing our executioner. We will continue to negotiate the merits of allowing humanitarian access to civilians who have nothing left to eat. We will continue the negotiations even as the regime tries to blow up UN vehicles (that) it committed to allow to pass through with much-needed humanitarian aid. We will continue to describe to the world what modern-day genocide looks like.

Our Holocaust will continue. And we will continue, because there is no alternative. A bitter pill to swallow, indeed. But at least we have something to swallow.