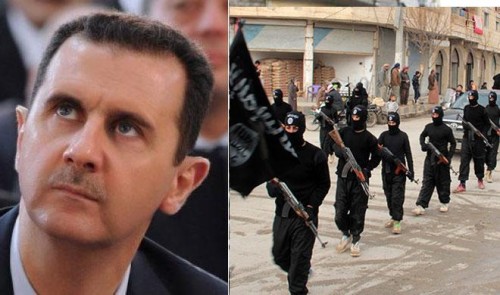 Aboud Dandachi writes on the blog From Homs to Istanbul, “It’s Time to Save Lives and Stop ISIS by Obliterating Assad’s Airforce”:

Bashar Assad’s helicopter gunships and warplanes have unleashed yet more indiscriminate bombings on the city of Aleppo and the Damascus countryside….The civilian death toll from air attacks just for the (first) three days of February now stands at 111, more than double the number of deaths from other sources.

While civilian opposition areas get battered by Assad’s barrel bombs on a daily basis, just as frequently opposition towns are targeted by the homicidal suicide bombers of ISIS (Islamic State of Iraq and as-Sham), a terrorist outfit so extreme, so deep into collusion with the regime, that even Al-Qaeda’s affiliates in Syria want nothing to do with it.

The “Geneva II Peace Talks” utterly failed to deliver on peace, and by the time of Geneva III, Geneva IV, Geneva XVI, ISIS will have taken control of those parts of Syria that Assad has not turned into rubble.

The times demand drastic action, if the world is to be spared a Syria divided between the extremism of the Assad regime, and the extremism of ISIS. For the sake of the country, the region and ultimately the world, Assad’s air force must be obliterated down to the last aircraft and helicopter.

From May 2013 to the end of November, 1525 civilians lost their lives from air attacks. In the run-up to the Geneva II talks, the Assad regime drastically increased the scale of its indiscriminate use of barrel bombs on civilian targets. More civilians died from air bombings — a horrendous 1660 — from the start of December 2013 to the 3rd of February, than the number that had been killed from air attacks in the previous seven months combined.

And no, Assad is not targeting fighters with these bombing raids: the victims have been overwhelmingly civilians. For a horrific description of a barrel bomb attack and its aftermath, it’s enough to read this report from Human Rights Watch, with special emphasis on this part:

Obviously, Assad will not be satisfied until every building in the towns and cities in opposition to him have been reduced to rubble.

However, it must be mentioned that there have been areas spared the aerial onslaught — those under the control of ISIS.

Let’s be clear about something; there is no doubt whatsoever that far from fighting ISIS, the regime and this terrorist outfit are now in open collusion. ISIS have kidnapped leading journalists and activists. They have murdered commanders of more moderate units. They have even provided oil to the regime from Syrian oil fields they have taken over.

Three years ago, ISIS was almost finished as a force in the Levant. Then at the start of the revolution, Assad released from his prisons some of the most hardcore and vicious leaders of the movement, who then went on to reconstitute the organization. Now, ISIS controls a swath of territory stretching all along the Euphrates right up to the Turkish border, territory that the regime has never attacked with its forces. ISIS positions and buildings remain unscathed even as surrounding areas are utterly destroyed with artillery and air attacks.

And it’s not like ISIS HQs are hard to distinguish. On the contrary, the group makes its presence in the towns it controls very visible. For the first time in the history of warfare, an army brazenly and openly puts up big banners to indicate its headquarters. And just as incredibly, its supposed “opponent” does not make the slightest efforts to destroy said headquarters.
Far from fighting terrorism and extremism, Assad has been the single person most responsible for its resurgence in the Levant.

Nowhere is the collusion between ISIS and the regime clearer than in the Eastern province of Raqqa. The regime’s Division 17 had been under siege for close to a year, when last week ISIS expelled the more moderate rebels from the city and allowed the regime to resupply the base. ISIS prisons have been found to be filled with prisoners from more moderate brigades, and yet not hold a single regime soldier or mukhabarat (State security services) agent.

In January 2014, the more moderate rebel brigades grouped up and turned on ISIS, managing to expel it from numerous towns and villages in the north of the country, and killing some of its top commanders. It was exactly when ISIS was most hard-pressed that Assad unleashed his most barbaric air assaults on the towns where ISIS had been pushed out.

The Syrian Air Force today serves as the ISIS air force. It hits the areas the regime cannot otherwise reach. Its purpose is not to carry out tactical strikes in support of military objectives; its purpose is to punish and terrorize those areas that have thrown off the yoke of both the regime and ISIS.

Obliterating Assad’s air force will reduce his reach to only the areas his ground troops can hold. Denied airpower and the ability to resupply far flung bases, the most remote regime bases would collapse within weeks. Opposition areas not in close proximity to the front-lines could get the breathing space they need to establish civil administrations, to serve as refuges for the displaced who would otherwise have had to flee to other countries.Medical help, educational services, and other aspects of civilian life could be allowed to flourish in opposition areas.

With a stable civilian underpinning at their back, the fighting brigades would be better positioned to hold off the regime while they finished off ISIS. With the space allowed by safe areas, a viable civilian administration and political movement could finally take root in the opposition areas, and serve as an alternative to the extremism of the Assad regime, and the savage nihilism of ISIS. For once, the country might have a chance at a political settlement.

Or, the alternative is the continuation of the current Obama administration’s policy of the vigorous, energetic and singl- minded pursuit of excuses to do shit all, which can only lead to a continuation and worsening of the current situation; the very worst of worst-case scenarios. Neighboring countries saddled with millions of refugees in perpetuity, and a Syria split between the Assad regime. The Islamic State of Iraq and Syria — Soon to Be Lebanon and Jordan and Southern Turkey and Cyprus and Beyond. A Syria with large parts dominated by the world’s very worst terrorist organization, with safe havens and bases with which to serve as magnets for every caliphate-obsessed Jihadi wannabe in the world.

For those who say the West has no dog in this fight, what will they do when ISIS commits its first atrocity in the West, planned from and trained for from their bases in Syria?

Maybe some entertain the crazy notions of the West actually throwing its weight behind Assad to fight ISIS. Forget it. Assad had three years and every advantage a tinpot dictator could dream of; superpower veto cover at the UN Security Council, artillery and airpower monopoly, unlimited and massive Iranian support and Hizbollah involvement, and a fractured and disorganized opposition, and yet after three years he is still nowhere near to winning this war. Support Assad? Assad can’t even put on his trousers in the morning without the assistance of his Iranian backers.

Destroy Assad’s airpower, and you destroy his ability to project his power beyond the lines he currently holds, and you destroy his ability to support and aid his ISIS allies in the east of the country. The moderate opposition can roll back ISIS, while a homegrown political movement can come into existence, and possibly offer the country a way out of its horrendous situation.

But first, Assad’s air force has to be obliterated, down to the last plane and helicopter.