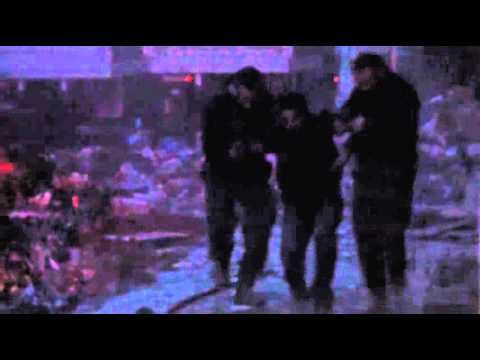 UPDATE 1500 GMT: Sam Dagher of The Wall Street Journal reports that, as local activists feared, evacuations from the Old City of Homs are being accompanied by the regime’s detention of men in the group:

Some aid was finally delivered to a besieged neighborhood in Homs after it was held up by fighting and an attack on a United Nations convoy that injured a driver. Activists are claimed that five people were killed in the gunfire.

The Syrian Red Crescent reported on Saturday night that its workers managed to deliver 250 food parcels, 190 hygiene kits, and medicines for chronic diseases to Old Homs.

Photo of the aid being delivered:

Photo from old city #homs where the aid was delivered today. pic.twitter.com/kRctc4JNLn

The city of Homs is under regime control apart from four neighborhoods, including the historic Old Town, which have been under siege for more than 18 months. While the regime allowed 83 civilians — women, children, the elderly and the wounded — to be evacuated Friday, activists say that between 3,000-4,000 civilians remain trapped in the besieged areas. It is not clear how many people the 250 food parcels will feed.

Footage of the firing:

Activists also said that following the aid delivery, Syrian forces resumed heavy shelling on one of the besieged neighborhoods. At least nine Red Crescent and UN vehicles were trapped in Homs for several hours after dark. The convoy left just before 10pm local time, leaving behind two damaged trucks.

Footage of the aid deliveries:

Insurgents have posted videos and photographs of their capture of Maan in Hama Province, a stronghold of pro-Assad Shia militia:

Video: Carnage and Casualties from Barrel Bombs in Aleppo

Aftermath of shelling in the Shaar neighborhood:

The Local Coordination Committees said 197 people were killed across Syria on Saturday, including 29 children and 18 women.

Of the deaths, 105 were in Aleppo Province, 32 in Hama Province, 23 in Daraa Province, and 15 in Damascus and its suburbs.

The Local Coordination Committees have posted a humaniatarian appeal for thousands of civilians who fled recent bombing of Aleppo and are now in Kilis in Turkey on the Syrian border.

The Committee said most of the displaced are children and women with no shelter and inadequate food and clothing.