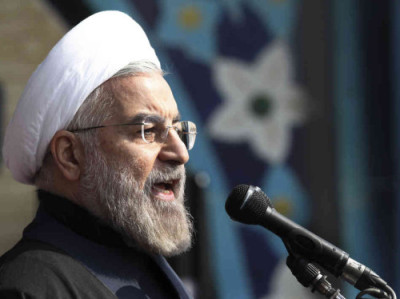 A well-placed EA correspondent in Iran evaluates President Rouhani’s speech on the 35th anniversary of the Islamic Revolution last Tuesday:

Every year, the President praises the Islamic Revolution and congratulate people on its victory. This year, Rouhani added criticism of the social and political situation and set out the Government’s task to change it:

1. The Importance of the 2013 Presidential Election

At the beginning of his speech, Rouhani invoked the significance of his victory in the Presidential ballot last June:

The Shah’s regime did not give the freedom to vote or to speak, so people’s decisions had no effect on running the country. This was a humiliation for the great nation of Iran.

With this Revolution people wanted to assure that their votes and views are respected and counted. In another words, they wanted the establishment of national sovereignty against dictatorship.

2. Emphasis on the Rule of Law

Rouhani emphasized the necessity of respecting and obeying the law by all people and authorities. He promised that The Government was trying to achieve the rule of law throughout the country and will stand against anyone breaking the law.

3. Coordination and Commitment of All Government Officials in Implementing Election Promises

Rouhani challenged his critics with his reference to “extremist opposition groups and currents”, whom he said are “worried about the achievement of the election’s promises”.

The President said this was the reasons why prominent Iranian outlets are spreading rumors about resignations of Ministers or conflicts between officials.

(In recent weeks, websites such as the Revolutionary Guards’ Fars News and the hard-line Raja News, Kayhan, and Resalat have posted stories claiming the resignation or dismissal of Government figures such as 1st Vice President Eshagh Jahangiri and Oil Minister Bijan Namdar Zanganeh.

4. Governance By All Political Parties

Rouhani declared, “No one should think that a single party can govern the country. All political factions and parties should play their role.”

He claimed the high turnout on the anniversary supported this aspiration: “According to information given to me, 22nd of Bahman of this year is completely different to the previous years. This year, all the groups and ideologies have participated in the demonstrations, and this is a pride for officials and frustration for our enemies.”

The Government had sought the participation of reformists in this year’s rallies. The call appeared to be successful, with some families of political prisoners, such as former MPs Mohsen Mirdamadi and Behzad Nabavi, participating in marches.

Rouhani claimed that conflict between groups in the Islamic Republic had reached a peak during the eight years of his predecessor, Mahmoud Ahmadinejad. He continued:

We want to increase national reconciliation, national unity, and national solidarity day by day. We want to cleanse the hearts of hatred, forget about the past, and think about the present and future of our country.

6. Request for Assistance to Fight Corruption

How can it be tolerated that one person, takes 9 thousand billion Toman (about $3.5 billion) of the people’s money? Where has this money gone and where has it been consumed? Who has given the permission to use this money? We must be vigilant against corruption.