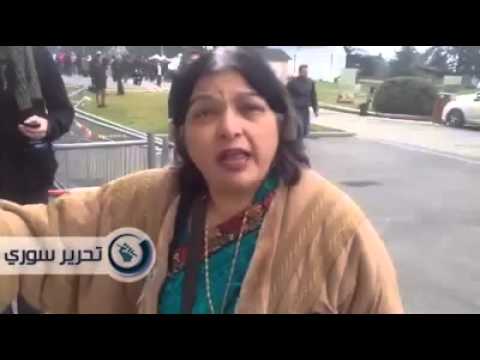 In December, Syria’s authorities announced that British doctor Abbas Khan had died in detention, more than a year after he was seized as he worked in a field hospital. They claimed he had hanged himself, but Khan’s family say he was tortured and killed.

This week, Khan’s mother Fatima went to the Geneva II conference to keep attention on the case of her son and of Syria’s other detainees:

This has provoked Syrian State news agency SANA, which headlines on Friday, “New Drama to Instigate Public Opinion in Geneva Performed by Opposition who Supports Terrorism“:

The coalition delegation called “opposition” brought mother of the British doctor of an Indian origin, Abbas Khan, who entered the Syrian territories illegally and did illegitimate activities, then committing suicide in the prison (hours before efforts) to set him free.

The doctor’s mother loudly directed insults in front of cameras of a number of channels which practice lies and media fabrications.

The outlet then claims, “When SANA delegate to Geneva Haifa Said asked her about the reason why she directed insults, Mrs. Khan tried to beat Miss Haifa, but two accompanying persons prevented Khan from attacking (her).”