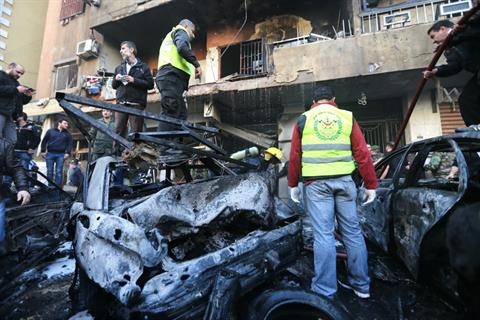 At least four people have been killed and 46 wounded in the latest suicide bombing in southern Beirut, a base of support for Hezbollah.

The attack in the Haret Hreik district took place was the second this month. It follows attacks last summer in the nearby Dahiyeh section and a November bombing near the Iranian Embassy, in which Iran’s Cultural Attache was killed.

The Lebanese branch of Jabhat al-Nusra, a leading Islamist faction in the Syrian conflict, has claimed responsibility:

We were able to respond to the massacres committed by Iran’s party against the children of Syria and of Arsal (a Lebanese border town) with a suicide operation that targeted the heart of its southern suburbs. We call on the Sunni community in all Lebanese areas to unite their ranks to confront the party of the devil.

The group also carried out a bombing last week, which killed five people and injured 42, in Hermel in the Bekaa Valley.