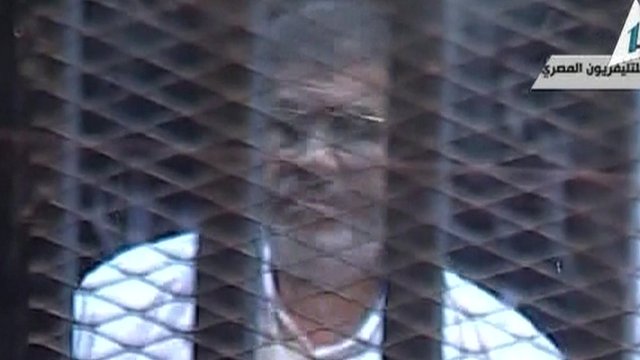 Egypt’s deposed President Mohamed Morsi appeared in court on Tuesday over charges of complicity in the killing of police, during his escape from prison in the 2011 Egyptian Revolution.

Dressed in a white jumpsuit and inside a metal cage in the court, Morsi — identified by the court as “Defendant 83” — shouted at the the judge: “Who are you? Do you know who I am?”

The judge responded, “I’m the head of the criminal court.”

The trial opened a day after General Abdel Fattah el-Sisi, who led the coup against Morsi in July 2013, was cleared by the military to run for the Presidency later this year.

Morsi was among 20,000 prisoners who escaped during the 2011 uprising against President Hosni Mubarak. Others charged in the case include members of the Palestinian group Hamas and the Lebanese organization Hezbollah.