Syria: The Free Women of Darayya 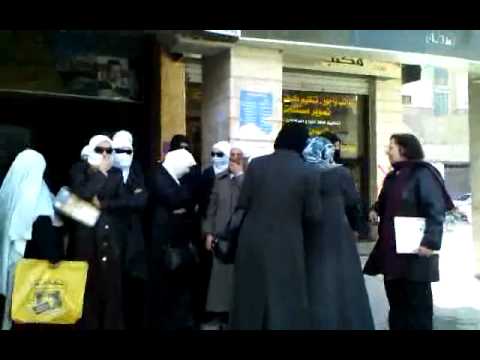 Syria Untold writes about The Free Women of Darayya:

Darayya, a Syrian town in the outskirts of Damascus where renowned peaceful activists such as Ghiath Matar and Yahya Sherbaji were born, stands as a symbol of the Syrian nonviolence movement. Also part of this civil grassroots movement is a group of women known as Darayya´s Free Women, who have engaged in numerous protests and initiatives since the beginning of the uprising in the spring of 2011.

“We didn’t know each other before the uprising”, one of the women said in an interview with Syria Untold. “The demonstrations that took so many to the streets to demand freedom and justice united us.”

Part of this group, which was key at the initial stage of the uprising, was already involved in civil initiatives prior to 2011. As early as in 2003, young men and women from Darayya had worked on several campaigns such as citizen cleaning committees and demonstrations against the US invasion of Iraq. They contributed to the foundation of what years later, in the context of the Arab uprisings, became known as the Syrian Civil Movement. Already at that time, the movement was considered a threat by the regime, which engaged in arrests of several of its members.

The first initiative that made this group of women stand out within the civil movement was a sit-in to demand the release of prisoners of conscience, in April 2011. By that time, the regime had increased its repression against peaceful demonstrators by killing, arresting and torturing hundreds of activists. Darayya´s Free Women were also targeted in this first protest, which ended with the regime opening fire against them.

Attempts to silence them did not stop the group from engaging in more initiatives, such as the large demonstration which became known as Great Friday, followed by Black Saturday, which marks a day when hundreds of protesters were arrested and killed by the regime.

As the situation on the ground became increasingly difficult, entailing more risks for activists, the group started organizing meetings to plan their strategies, focusing on aspects such as communications, and offering workshops to women wanting to demand and promote changes in their country. This attracted several others who were not comfortable attending the demonstrations but wanted to find their own ways to contribute.

The meetings led to a professionalization of the group’s work, which started distributing tasks such as communications and public relations, photography, humanitarian and psychological attention, while recording their activities on the group’s website.

As the regime increased the pressure against the town, arresting renowned peaceful activists such as Ghiath Matar, and shelling the city to silence protests, the Free Women of Darayya continued to develop their work on the ground. During Christmas time, they decorated a tree with the names of detainees in Syrian jails, and gathered letters from their mothers and children to post them on a big banner in the street. They worked on several other grassroots initiatives, from emergency and humanitarian assistance to the publication of the local newspaper The Grapes of My Country (“Enab Beladi” in Arabic)

The group also invited women from other towns, such as Sednaya, to join them and stand together against the regime’s attempts to divide Syrians and ignite sectarianism in their rich and diverse society.

When the city fell under siege, in November 2012, most of the women were forced to leave Darayya. Many returned months later, to find their town devastated and its people massacred. This did not prevent them from resuming their work, focusing on the huge amount of people in need for food and assistance, while several of its members faced detention by the regime.

Today, most of the women are in jail or have been forced to leave the country. However, they continue to work on issues related to women´s rights, whether in Egypt or inside the Syrian regime´s jails, awaiting for the moment where they can return to Darayya, the town that stood against tyranny through nonviolence.