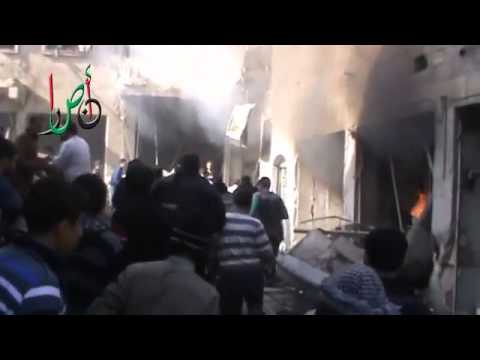 The Week Past, The Week Ahead: Syria’s “Dynamic Stalemate”, Iran Looks to Recovery
Document: Founding Declaration of the Islamic Front
Spotlight: Refugee Carried His Children To Bulgaria After His Wife Was Killed In Bombing

Another 45 people died in Aleppo Province on Sunday as the Syrian military maintained its surge in airstrikes, including the use of “barrel bombs”.

At least 30 of the deaths were in the town of al-Bab, 40 kilometers north of Aleppo, bringing the weekend total to at least 57.

The Local Coordination Committees in Syria also report the barrel bombs — large cylinders or oil drums packed with explosives — were used in Deir Hafir, Atarib, Abzemou, and Rashdeen, as well in two locations in Hama Province and one in Idlib Province.

State news agency SANA ignored the barrel bombs, saying only, “Army units carried out a number of special operations in al-Bab city in which they razed several terrorists’ dens.”

While regime forces made some gains last month in an offensive in Aleppo Province, notably to the east of Aleppo city, there was no apparent strategic motive for this weekend’s attacks.

The LCC said 111 people were killed on Sunday, including 8 women and 15 children. In addition to the 45 Aleppo deaths, 42 people died in Damascus and its suburbs amid the escalation of fighting near the capital.

Navi Pillay, the UN High Commissioner for Human Rights, said on Monday that investigations point to the involvement of Syria’s senior officials, including President Assad, in crimes against humanity and war crimes.

“They’ve produced massive evidence,” Pillay told a news conference. “They point to the fact that the evidence indicates responsibility at the highest level of government, including the head of state.”

Pillay said the lists of suspects will remain sealed until requested by international or national authorities for a “credible investigation”.

Syria’s Deputy Foreign Minister, Feisal Mekdad, responded, “She has been talking nonsense for a long time and we don’t listen to her.”

A Petroleum Ministry official has admitted that attacks on natural gas facilities have caused a substantial loss in daily energy supplies.

The official said insurgents had cut off supply from a natural gas pipeline linking Homs in western Syria to Deir Ez Zor Province in the east.

The Ministry official said the Government had restricted the use of electricity to cope with the ensuing gas shortage.

“Chaos” in Damascus Suburb Amid Regime Shelling & Negotiations for Takeover

Qusai Zakarya, a local activist in the besieged Damascus suburb of Moadamiyyat Ash Sham, is documenting his hunger strike, now in its 7th day.

On Saturday, Zakarya wrote of an “offer” by the Syrian military, possibly allowing food into the town if the regime’s flag was raised. He updated in Sunday’s entry:

Our town was chaos today. The townspeople were in upheaval about regime negotiations and the potential ceasefire. Even while 5 men sent by the regime sat amongst us, selling the regime’s story, the regime was shelling our town.

Yes, even as they tried to convince us to take their dirty deal, illegally placing conditions on food reaching civilians, the regime once again tried to invade our town by ruthless military force. Only in the twisted mind of the regime, this behavior could make sense.

See Syria Spotlight: Regime “Offer” to Besieged Moadamiya — Raise Our Flag and You Might Get Some Food

State news agency SANA headlines Rouhani’s declaration of “Iran’s keenness on bolstering the Syrian people’s steadfastness in the face of the unfair war waged against them and securing their needs to overcome the economic blockade”.

No details have been given of al-Halqi’s trip beyond “opportunities of cooperation in various areas, including in trade and economically, and means to remove obstacles in the way of the flow of goods between both countries”.

SANA also refers to “ways to activate the [$3.6 billion] line of credit” opened by Iran in June, including the supply of oil.