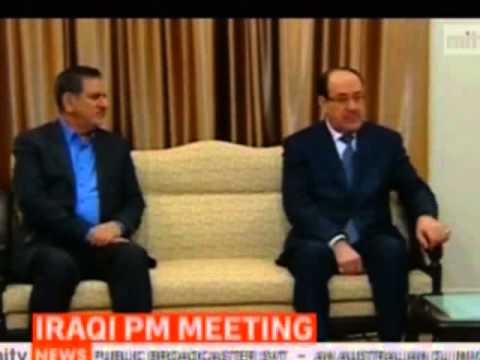 [Our] field of cooperation is increasing in many different areas. There is no barrier to the advancement of relations with Iraq and the development of regional cooperation.

The scientific growth of Iran in recent years has been very prominent. The transfer of scientific experiences to Iraq can be one of the important fields of cooperation between the two countries.

President Rouhani also urged close cooperation with Iraq following a meeting with al-Maliki, stating “We consider relations with Iraq to be strategic. We are trying to develop long-term relations between the two countries in all fields, especially the economic and infrastructure fields, including providing for greater activity in the private sector.”

Iran has stepped up President Rouhani’s pursuit of regional “engagement” after its interim nuclear deal with the 5+1 Powers on November, with Foreign Minister Zarif visiting Kuwait, Oman, and the UAE this week.

Abbas Ali Mansouri Arani, head of the Friendship Group, said that he extended the invitation, which was welcomed by Straw.

Arani noted the upturn in British-Iranian relations by highlighting the arrival in Tehran of Britain’s new non-resident charge d’affaires, Ajay Sharma, on Tuesday.

“I had a good first visit back to Tehran today and want to thank the Iranian authorities, particularly my counterpart Mr. [Mohammad Hassan] Habibollahzadeh, for facilitating the trip,” Sharma said in a statement issued by the UK Foreign Office.

“I held detailed and constructive discussions with the Iranian Ministry of Foreign Affairs about taking forward our bilateral relationship on a step-by-step and reciprocal basis,” he added.

Foreign Minister Javad Zarif has called on Iranians across the globe to unite.

Zarif told a meeting of Iranians in Dubai on Thursday, “Given the conditions provided, we must be of one voice and one heart to promote the name of Iran. Iranians must move together in order to achieve their goals and put political factionalism and personal benefits to the side in order to achieve national interests and global respect.”

He added, “We are making an effort to achieve rights, acquire interests, lessen pressures, and increase respect for Iran and Iranians in the world.”

He also declared that worker salary negotiations would begin next week and the expansion of non-government organizations and civil rights.

Rabi’i added, “Despite the approximately 4.5 million university students in the country, approximately 50% of the work force lacks the necessary skills…The administration of moderation and hope is headed towards jobs planning and believes that jobs require strategy.”

Pakistani officials have said that “several mortars” were fired from across the Iranian border into Washuk district of Balochistan.

The Iranians were probably targeting camps of the Sunni insurgency Jaish ul-Adl, which has carried out a series of attacks on border guards and other troops.

“At least six mortars fired from the Iranian border area at brief intervals exploded in an open area of Mashkel town,” the Pakistan officials said.

There was no loss of life or property.

Hasni continued, “It is the third incident of firing of mortars and rockets in the Mashkel area in two weeks,” calling on Islamabad to lodge a strong protest with the Iranian authorities.

The Revolutionary Guards have announced that one of its troops died near the northwest border while “establishing security…and preventing anti-Revolutionary movements and armed groups from operating in the sensitive border region”.

The Guards did not name the attackers, but they are likely to be from the Kurdish insurgency PJAK.