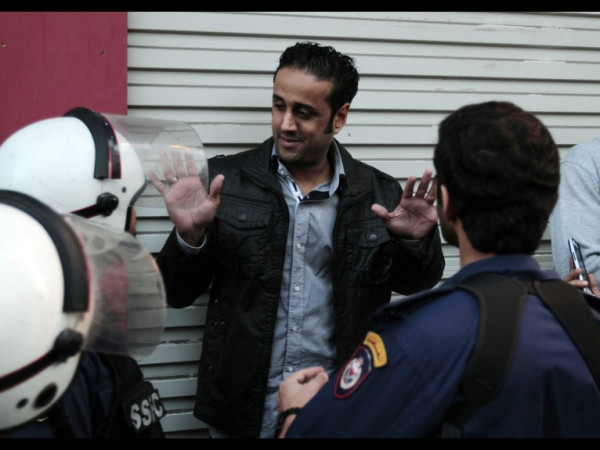 Since Bahrain’s mass protests began in February 2011, Said Yousif Almuhafda has been one of the most prominent figures in the call for political reform, rights, and justice.

Yousif, the Vice-President of the Bahrain Center for Human Rights — and acting leader after the imprisonment of Nabeel Rajab in July 2012 — has documented the actions of the regime, including its treatment of political prisoners. He himself has been detained, including beatings and questioning in August 2012 and December 2012.

Now Yousif has decided that, for his safety and to continue his work, he must go into exile.

He explains in an article published on PolicyMic on Monday….

I’ve Been Forced into Exile for Defending Human Rights in My Home Country, Bahrain

I am not going back to my country.

It was one of the hardest decisions I have ever made. But I made it to continue doing the work that matters most to me: documenting the human rights violations in Bahrain that have been ongoing since protests for change began in February 2011. I will stay abroad and work from exile for the Bahrain Center for Human Rights (BCHR) after receiving numerous death threats for launching a campaign to hold officials accountable for torture.

The BCHR launched a campaign called “Wanted for Justice” from Nov. 1 to Nov. 23, which has involved publishing the names and photos of people responsible for human rights violations in Bahrain. Many of these offenses have gone unpunished. What we want is simple: We want their crimes to be known internationally, and the perpetrators must be held accountable and given fair trials.

Despite promises of reform and the government-commissioned Bahrain Independent Commission for Inquiry (BICI) report, the situation on the ground is still grim. Human rights violations will only continue as long as those responsible for carrying out torture go unpunished.

Bahrain’s Prime Minister Khalifa bin Salman Al Khalifa (who took office in 1971) is shown here with Lt. Colonel Mubarak Huwail after he was acquitted of charges related to torturing doctors who treated injured protesters in 2011.

His words to Huwail? “These laws are not to be applied to you.”

This is what so-called reform has looked in Bahrain. All about show, without any real change.

And for documenting and speaking out against these abuses, many members of BCHR have had to pay a price, and we continue to be targeted by the government’s malicious campaigns.

One of the BCHR’s founders, Abdulhadi Al-Khawaja, was given a life sentence for his role in the 2011 protests. The organization’s current president, Nabeel Rajab, has been serving a two-year jail sentence since July 9, 2012 for his role in protests earlier that year. Acting President Maryam Al-Khawaja cannot go back to Bahrain. In August, she attempted to visit, but was blocked from boarding her British Airways flight on the request of the government.

In fact, a large number of BCHR members have been forced to settle in the United Kingdom and across the globe because of their human rights work. Each of them has a different, heartbreaking story, but there’s a common refrain: They are paying a price for speaking out against human rights violations.

I was the remaining public face of BCHR, and for leading the “Wanted for Justice” campaign, I have been receiving numerous arrest, torture, and death threats during the past few weeks. The threats came in phone calls, or through social media sites, and even state television. I was outside of the country when the campaign was launched, but I was warned that I would be targeted soon after my return. One such death threat came from Adel Felaifel, the former officer of the national security apparatus on Twitter.

I can’t take threats like that lightly, especially when Nabeel Rajab was arrested shortly after returning from abroad in May 2012. The authorities took him away from the doors of the plane. Felaifil also threatened him shortly before his arrest.

I especially cannot make light of such threats when I have a wife and two young daughters. I’ve been a regular target of the regime for speaking out against violations, and for monitoring protests. In August, I was slapped in front of my daughters and detained by police officers.

Human rights activists like me, Nabeel, or Abdulhadi remain in prison for one reason: The government is more concerned with hiding, rather than addressing, human trights violations. There’s a reason why activists are in prison or in exile, and officials remain free. That’s because Bahrain has a culture of impunity that it has yet to address. And it is time for the international community to hold them accountable for it.

It has been more than two years since the release of the BICI report, and only yesterday the government congratulated itself on progress in implementing reforms. Arbitrary arrests, nightly raids, and torture are still a reality. The judicial system has not offered justice and instead seems to be more of a tool for silencing human rights’ defenders and opposition members. There are almost 3,000 political prisoners still in jail, and 90 killed since the start of protests.

We are hoping that through publishing the names of these violators, we would send a message to the international community. But also, we wanted to send a message to those violating human rights to let them know that we won’t rest until they’re held accountable.

I, along with other human rights activists, won’t rest until those responsible for violations receive a fair trial in accordance to international human rights standards.

It’s time to end Bahrain’s culture of impunity. It is the only way that real reforms can begin.