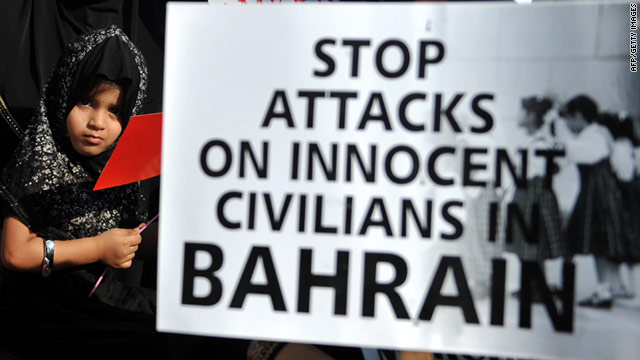 Amnesty International has issued a briefing declaring that children are being routinely detained, ill-treated, and tortured in Bahrain.

The organization said scores of children as young as 13 have been arrested on suspicion of participating in anti-government protests since mass demonstrations began in February 2011. They were blindfolded, beaten, tortured, and threatened with rape to extract forced confessions.

Amnesty cites reports of at least 110 children aged between 16 and 18 held at the Dry Dock Prison, an adult facility, pending investigation or trial.

Children under the age of 15 who have been sentenced are held at a Juvenile Centre in Manama under Ministry of Interior control. During the day they are attended by social workers but at night, when most alleged abuses take place, Bahraini police take over. At the age of 15, those held in the Juvenile Centre are transferred to adult facilities such as Jaw Prison in southeast Bahrain.

Most of the juveniles have been arrested on suspicion of participating in “illegal gatherings”, rioting, burning tyres, or throwing Molotov cocktails at police. Many were seized during raids while they were playing at home; some were taken from a local swimming pool. Several were denied access to their families for extended periods and interrogated without their lawyers.

Amnesty called for all detainees under the age of 18 who have not committed a recognizable offence to be released immediately, and for any allegations of torture and ill-treatment to be thoroughly investigated. It asked for alternative penalties, such as probation and community service, for children who have committed criminal offences.

Bahrain is a signatory to the UN Convention on the Rights of the Child which explicitly prohibits torture or other cruel, inhuman, or degrading treatment or punishment.