Syria Spotlight: From Idlib to Dar’aa, Syrians Risk Their Lives To Harvest Olives Amid Regime Shelling 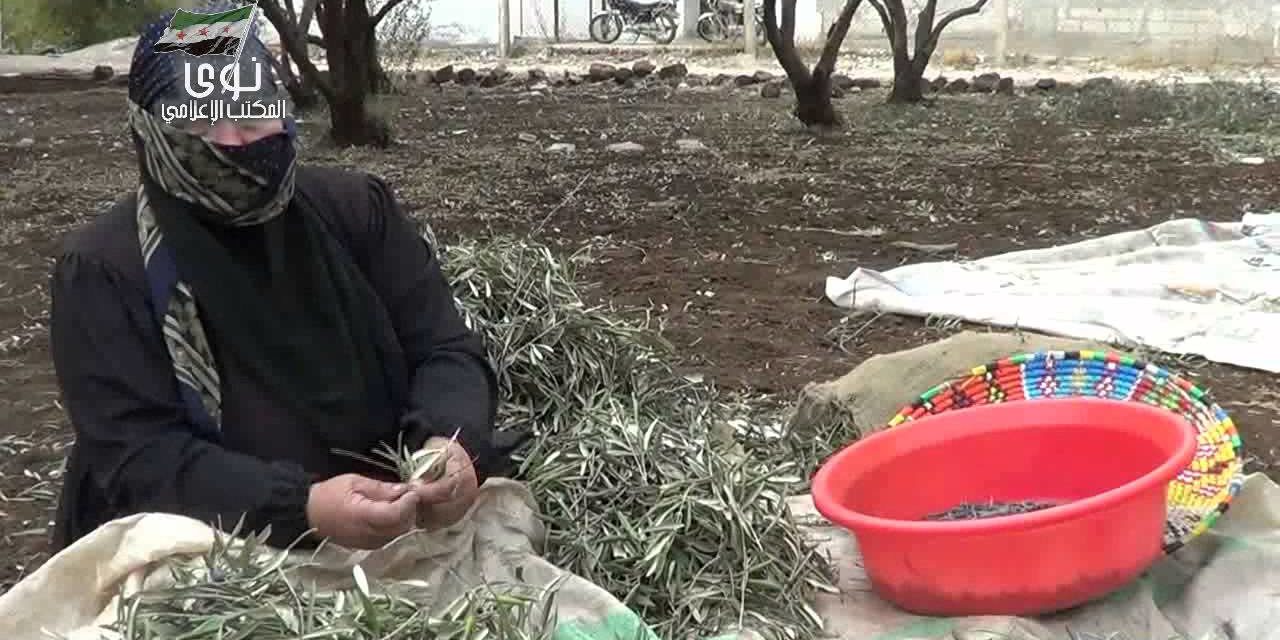 Olive farmers in both the north and south of Syria say they have had little choice this season but to try to harvest their crops, despite the dangers of regime shelling.

In Termanin village in Idlib Province in the north of Syria (click for map), farmers report that they are going into the olive fields to harvest what they can find, though the regime is continuing to shell the area with explosive barrels and artillery. 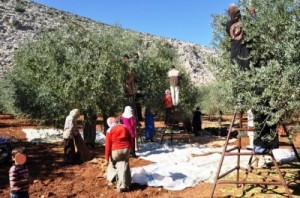 The farmers said that they had little choice but to try to continue with their livelihoods.

“Last year almost all of us left the village frightened of shelling and bombing with explosive barrels, which prevented me from harvesting olives, however this year we have no choice but to stick to our source of living,” Abu Mahmood, a farmer from Termanin village told Eqtsad.

He added that last year, the price of olive oil fell despite a sharp increase in prices in general. This year, however, prices have improved.

Abu Khalid, an agent who helps provide workers for the olive harvest, told Eqtsad: “I have more than 30 workers, we help farmers in harvesting their products, usually we manage to harvest more than 20 fields a year.”

He explained that wages have increased this year compared to last, and that a daily wage for an olive picker can reach 500-700 Syrian pounds.

Abu Mohamed, who has an oil-press in Northern Syria, told Eqtsad that “there is no doubt that productivity has fallen down as a result of using large area of agricultural land for camps or other benevolent programs.”

He added that his oil-press produces now around 3 thousands tons of oil, which is better than before. The reason for that, he added, was that other local oil presses have been destroyed.

Abu Mohamed said that another major issue was that Kurdish groups have taken over local land in Idlib.

“It worth mentioning that some Kurdish groups, including the PKK, have occupied wide area of farmers’ lands and prevented (the farmers) from reaching to them to harvest their products,” he said.

Abu Mohamed added that people in Efrin and its surrounding countryside are an extremely difficult situation, whereby the PKK prevents them from reaching to their land. The farmers cannot leave the area and go to Turkey because they are frightened of Turkish snipers, and fear being a target for extremists in nearby countries.

Civilians in the opposition-held, besieged town of Nawa in Dar’aa Province say they face similar issues.

In Nawa, olive farmers say they have only been able to harvest those trees that are within the town itself, or those on its very outskirts, because of the regime siege. The farmers have had to leave the olive groves that are outside the town itself without harvesting them, because they fear being shot at by regime forces. In effect, the regime has taken control of the trees and hence a large part of the farmers’ livelihood.

This video report, shot inside Nawa, shows some of the difficulties faced by civilians in the town as they try to harvest whatever they can.