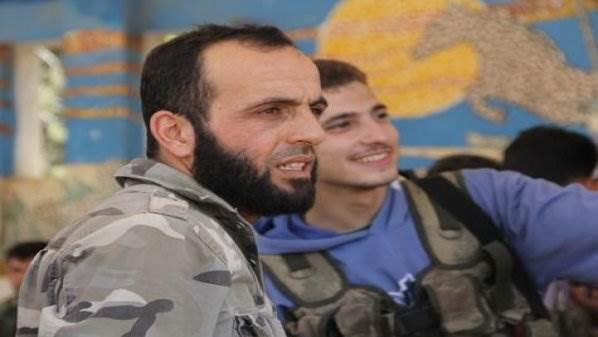 Shaam News Network reports that Abdul Qadir al-Saleh (pictured), the leader of one of the largest factions in the insurgency, has died of wounds sustained during a regime airstrike in Aleppo last week.

A Syrian warplane struck a building in Syria’s largest city as insurgent commanders met, killing and wounding several of them.

Al-Saleh was the head of Liwaa al-Tawhid, prominent in the fight in the north. He was one of the founders of the faction, which now has more than 10,000 members, in July 2012, and he was a charter member of the Supreme Military Command

The commander was also a charismatic figure for the insurgency, often seen in videos discussing tactics with his fighters amid nearby gunfire.

An EA correspondent assesses the impact of al-Saleh’s death:

His martyrdom is bad news for the Islamic State of Iraq and as-Sham. He stopped his men several times from applying force to end their escapades.

Great commanders like him are not easy to replace but Liwaa al-Tahwid has stronger structures than reported by some analysts.

The last known video of al-Saleh, telling soldiers to place their trust in Allah and obey him to gain victory:

An interesting juxtaposition in a Global Post interview with Justice Minister Najm al-Ahmad:

“In the city of Damascus there are no problems,” Ahmad told GlobalPost in an exclusive interview. “The road from Damascus to Homs is safe.”

But Ahmad admitted that Damascus is under regular attack by rebels. During the Saturday interview, for example, artillery fire could be heard as the Syrian Army continued to shell rebel held areas on the southern outskirts of Damascus. That same day, the Syrian Army closed the Damascus-Homs highway due to fighting in the Qalamoun area. It’s expected to be blocked for at least the rest of the week.

Then on Sunday, a rebel bomb killed 31 government troops at an army vehicle depot on the northern outskirts of Damascus. Rebels dug a 50-foot-deep tunnel under the building and then set off explosives, according to military sources at the scene. City residents feel the impact of the war as military checkpoints slow traffic to a crawl, soldiers guard major intersections and residents face shortages of gasoline and electricity.

Video: Cameraman Has Narrow Escape During Regime Attacks in Qalamoun

A cameraman records regime shelling of the Qalamoun area, between Damascus and the Lebanese border, and narrowly escapes injury:

The Syrian military launched its offensive in Qalamoun last Friday, forcing hundreds of residents to flee to Lebanon.

Kuwait Says It Will Prevent “Extremists” Going to Syria

“Government sources” have said that Kuwait is monitoring local “extremists” to prevent their travel to Syria to fight against the Assad regime.

The sources aid that the Ministry of Awqaf and Islamic Affairs handed lists to the Interior Ministry with the names of men who were previously arrested and put in rehabilitation programs to counter Jihadist ideologies.

The source admitted that the number of Kuwaiti fighters in Syria has doubled in recent months and said it is now highest among citizens of Gulf States.

Last week The New York Times reported that private Kuwaiti donors have put millions of dollars into the Syrian insurgency, making it “the biggest regional problem for the US in terms of funding Islamist fighters in Syria”, according to Assistant Secretary of Treasury David Cohen.

Foreign Ministry Undersecretary Khaled Al-Jarallah replied that “Kuwait acts in a transparent manner with regards to charity, which is organized by laws and regulations”.

Syria’s news agency SANA is still silent on insurgent claims of a bombing of an Army administrative building near Damascus on Sunday afternoon, killing four generals amid 31 dead.

Reports began circulating on the Internet of an explosion that levelled the building in Harasta, northeast of the capital. The Direh al-Aasmeh (Shield of Damascus) Brigade, part of the Free Syrian Army, posted claimed footage:

The Russian news agency ITAR-TASS said, from eyewitnesses, that the bomb was placed in the utilities underneath the building.