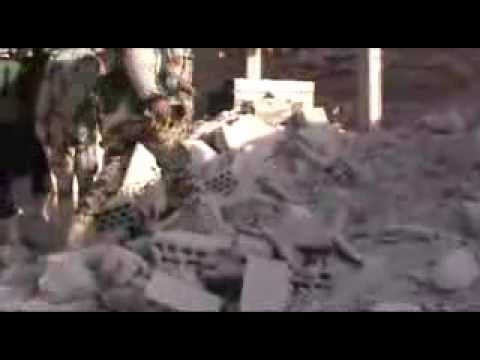 ALSO IN THE FORECAST:

Capture of Sbeineh: Regime Breakthrough in Southern Suburbs of Damascus?
Free Syrian Army Claim Victory over Islamic State of Iraq and as-Sham in Aleppo Province
Protesting the Regime Siege of Moadamiyyat Ash Sham
How Far Have Kurdish Militias Advanced in the North
More on the Saudi Break from the US Over Syria?

The offensive, lasting for more than two weeks, is one of the largest this year. It includes fighters from Homs, Free Syrian Army units, and the Islamist faction Jabhat al-Nusra.

Mahin is one of the largest regime stockpiles of weaponry, with a key position in the centre of the country. With its capture, the opposition can limit the Syrian military’s ability to re-supply both to the south, supporting its occupation of cities like Homs, and to the north in the effort to break the insurgent hold on much of the area.

The videos indicate the insurgents captured the major buildings and warehouses in the depot at least 48 hours ago. However, the opposition maintained a strict embargo on information over the complex operation.

The regime has replied with airstrikes and surface-to-surface missiles, but without any apparent effect on the insurgent takeover.

Claimed impact site of a regime missile, north of the ammunition depot:

Claimed video of a strike on a regime target on the base earlier this week:

Capture of Sbeineh: Regime Breakthrough in Southern Suburbs of Damascus?

The Syrian army has captured Sbeineh, a southern suburb of Damascus, after sustained attacks.

Syrian State TV said the army had achieved “complete control” over Sbeineh, “a hotbed for militants and a supply center for weapons and ammunition”.

An officer spoke in a live broadcast from Sbeineh, amid shattered buildings and deserted bunkers made of sand bags and metal barrels.

Sbeineh, with residential buildings and a large industrial zone, is on the highway linking Damascus to the Jordanian border.

Activist Rami al-Sayyed said, “The rebels began to find themselves encircled and had to pull out. Sbeineh was key to the defense of the southern neighborhoods. [The adjacent suburb of] Hajar al-Aswad is now vulnerable.”

The Free Syrian Army say they have pushed the Islamic State of Iraq and as-Sham out of Castello in Aleppo Province, posting a video with a claimed conversation between ISIS fighters after the clash:

The Chechnya-based Russian-language pro-jihadist site FiSyria had posted on Tuesday that ISIS took a building, named Castello, from an insurgent group whom it claimed had aligned itself with a pro-Assad Kurdish militia. FiSyria said that ISIS took the decision to storm the Castello building and several other posts after the insurgent group, named as the Shuhada Brigade, had begun firing on local civilians passing along a road.

ISIS claimed to have killed six pro-Assad fighters and wounded more in the fight, and that none of its fighters were killed. FiSyria has published this video of the operation, in which Russian voices can be heard.

Women and children protest the year-long siege by Syrian forces of the Damascus suburb of Moadamiyyat Ash Sham.

The regime has been trying to break the insurgency in the area with the cut-off of food and supplies, blocking and even stealing aid. Last month, some of the 12,000 people remaining in the town were evacuated.

How Far Have Kurdish Militias Advanced in the North?

It has been a good month for Kurdish militias — notably the YPG, the military arm of the PYD political movement — with victories against insurgent forces in northern Syria.

The militias received some attention when they took Yaroubiyeh, near a post on Iraqi border, from the Islamic State of Iraq and as-Sham. Close observers have also noted the YPG/PYD success in holding Ras al-Ayn, near the Turkish frontier, after claiming it in July.

The significance is not in the taking of individual towns. The Kurdish forces are seeking to establish a continuous belt of territory across the north — and, in Hasakah Province in the northeast, they can claim some success.

However, there have also been setbacks. The Kurdish militia were expelled in August from Tal Abyad, near Raqqa.

And the victories in the north contrast with difficulties for Kurdish groups in Aleppo city, where they have been pushed aside in districts like Ashrafieh.

More on the Saudi Break from the US Over Syria

More confirmation of Saudi Arabia’s distancing from Washington over Syria, with a major effort to arm the insurgency as the US retreats from interevention, comes from Prince Turki al-Feisal in an interview with The Washington Post.

Turki, a former head of intelligence and brother of Foreign Minister Saud al-Faisal, made clear that the surprise Saudi decision to refuse a seat on the UN Security Council was because of disputes over Syrian policy:

Even if [the Council] had enforcement powers, it would only remove the chemical weapons. But [Syrian President] Bashar al-Assad can continue to kill his people using aircraft, artillery, Scud missiles and other lethal means. This also followed the Chinese and Russian veto of the resolution that would have put in place an interim government composed of all the factions in Syria — that was put in front of the Security Council a year and a half ago by the Arab League.

Turki then sets out the Saudi break from the US and European countries — read Britain — over the issue of arming the insurgency:

We had a proposal, put forth by our Foreign Minister, that you have to level the playing field. And that means Bashar’s military superiority has to be checked by giving the opposition the means to defend themselves. You’re not talking about sending troops on the ground. Over the past 2½ years, if anti-tank, anti-aircraft defensive weapons had been distributed to the opposition — and not all the opposition, [but] the opposition that is for an inclusive Syria — then they would have been able to checkmate the military superiority of Bashar al-Assad and force him to come to the negotiating table. Unfortunately, that did not happen. Europe and America continued to deny the opposition the means to defend against Bashar’s lethal weapons, the Russians and the Iranians continued to supply Bashar with whatever he needed….

Absolutely. The Europeans put an embargo on arms to Syria. They could see…that the embargo wasn’t affecting Assad but it was definitely denying his opponents…weapons. It took the Europeans 2½ years to change their view and finally say, “Okay, we can afford to sell these weapons to the opposition.” But none of these countries did. The Americans have not only not sold them, but they have declared they have no intention of providing these weapons to the opposition. So how can you level the playing ground if one side is continually supplied with what it needs by the Russians and the Iranians and the other side is continually denied those things?

Turki’s bitterness — and, by extension, that of King Abdullah, with his “studied and considered decision” over the Security Council — is evident, even as he refuses to blame President Obama directly: