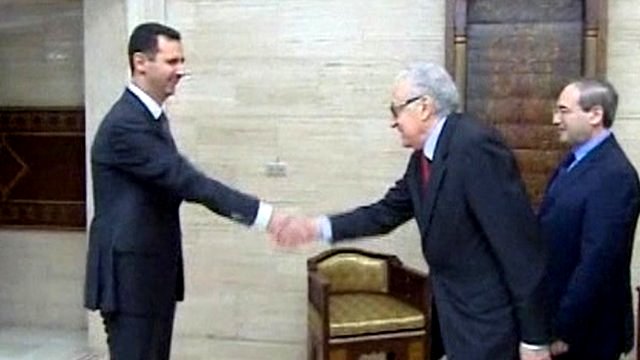 United Nations envoy Lakhdar Brahimi (pictured with Syrian President Assad) stated the obvious on Tuesday — “peace” talks on Syria will not be held in November:

It’s no secret for anybody, and [diplomats] are facing all sorts of problems and they are working very, very hard to get ready. And they are not ready.

The announcement is the latest delay in the proposed discussions in Geneva, first put forward by the US and Russia in April and re-asserted in September by the two powers after Washington’s decision against military intervention over the Assad regime’s chemical weapons attacks.

Brahimi maintained the line that the discussions will occur soon. He said that the senior diplomats, whom he met on Tuesday, were “still striving to see if we can have the conference before the end of the year”.

Like similar pronouncements for months, that is a Quixotic hope. Leading opposition groups, including the Syrian National Coalition and Syrian National Council — let alone insurgent factions — will not join talks without a promise that President Assad will step down from power.

The regime will not join without an assurance that Assad will not have to quit and he can stand for “re-election” in 2014.

Ahmad Jarba, the head of the Coalition, repeated that Assad’s departure is a pre-condition, and he also opposed an invitation to Iran to join the talks as a “provocation”.

Insurgents are maintaining an assault on an important arms depot in Homs Province.

For more than two weeks, opposition fighters have been attacking the depot near Mahin.

Some activists and the Syrian Observatory for Human Rights have been circulating unconfirmed claims that the insurgents have taken over parts of the depot.

Meanwhile, a Syrian security official in Damascus said, “The battle is continuing, the terrorists did not take any weapons, and there are many losses in their ranks.”

The seizure of Mahin, one of the regime’s largest facilities for weaponry, would counter last week’s loss of as-Safira, further north in Aleppo Province.

The Syrian security official denied the report, saying: “The battle is continuing, the terrorists did not take any weapons, and there are many losses in their ranks.”

State news agency SANA says 16 people have been killed in car bombings in Damascus and in Sweida in southwestern Syria, near the Jordanian border.

SANA said eight people died and 50 others were injured by an explosive device in al-Hijaz Square in the capital, in front of the General Establishment of Syrian Railways.

In Sweida, eight people were killed and 41 injured by a car bomb — near a major roundabout, according to State media; near a military headquarters, according to activists:

In Damascus, Assad’s Popular Committees “Little More Than a Network of Robbers”

A report by Reuters sheds light on what it calls “the impunity of President Bashar al-Assad’s security forces and allied militias blamed for a wave of abductions, theft and property seizures.”

The report, anonymised due to security reasons, suggests that the rise in arbitrary theft and abductions “has been exacerbated by the expansion of [pro-Assad] militias known as Popular Committees.”

Acknowledging that similar complaints have been made against various armed groups in rebel-held territory, the report argues that the Assad regime is turning a blind eye to the work of the Popular committees in return for their local knowledge, which enables them to identify “who among the locals might be a “trouble-maker” – a sympathiser with the rebels.”

On joining a local committee, the new member gets a monthly stipend, a Kalashnikov rifle and a mandate to join vigilante operations throughout the neighbourhood.

However, with so many armed men now patrolling turf and with little oversight, many in Damascus say the government is sanctioning little more than a network of robbers.

One account tells of an elderly woman whose valuables were stolen while her family and neighbours were at the local mosque.

The thieves in Rukn al-Din, a middle class area nestled under the army-controlled hills that hem the north of the city, struck at prayer time – a moment in the day when they knew many residents would be at the local mosque. They said they were from State Security – not an organisation Syrians say no to – and said they were doing a routine neighbourhood check.

“They clearly knew there would be only an elderly woman at home at that hour,” said a man who is close to the family and was present at the home after the robbery.

“They told her to bring all the home’s valuables and place them on the kitchen table – so as to ensure her belongings were safe while the men freely inspected her home”.

She did as they asked, bringing out jewellery belonging to herself and her daughters, and all the family cash – a sizeable sum in times when civil war has left people wary of banks.

“She was still making them tea when they made off with everything. By the time we got back, they had completely disappeared,” said the family friend.

The family tried to file a police report, but the precinct chief refused to follow it up.

“When we told him the perpetrators identified themselves as State Security, he went pale in the face and threw his arms in the air. He said he could not get involved, that he was not going to mess with state security,” the man said.

“Basically, we’re all fair game. No one looks out for us.”

Samantha Power, the United States envoy to the UN, has suggested that Washington remains sceptical about the Assad regime’s 700-page declaration of its chemical weapons.

Power said that US scepticism was based on past experience of dealing with Bashar al-Assad, although Damascus has met an initial deadline to destroy certain chemical and weapons production facilities.

“We obviously bring scepticism born of years of dealing with this regime, years of obfuscation in other contexts, and of course a lot of broken promises within the context of this current war,” Power said.

She warned, “You will certainly hear from us in the event that we detect non-compliance or we detect significant discrepancies.”

The Assad regime’s declaration of its chemical-weapons sites was made to the Organisation for the Prohibition of Chemical Weapons (OPCW) as part of the Russia-US agreement to destroy all banned chemical arms by mid-2014.

Powers reiterated that “The chemical weapons agreement and implementation has not changed the US position on Assad… A man who gasses his people and who uses Scuds and all other forms of terror against his people is not fit to govern those people.”