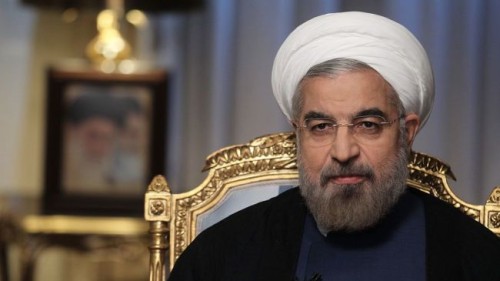 US Foreign Policy Spotlight: Is Democracy Promotion in the Middle East Dead?

President Rouhani has used an address on his 100th day in office to maintain Iran’s firm line on the interim nuclear deal signed on Sunday in Geneva: “Enrichment [of uranium], which is one part of our nuclear right, will continue, it is continuing today and it will continue tomorrow and our enrichment will never stop and this is our red line.”

The 5+1 Powers balked at formal recognition of the right in the agreement, but — according to the text published by Iran’s Fars News and by CNN — it was implicitly acknowledged in accepting the Islamic Republic’s production of 3.5% uranium.

In return for easing of sanctions, Iran agreed to suspend enrichment of 20% uranium, which potentially could be enhanced further for military use, and to convert existing stock to fuel plates or dilute it below 5%.

Rouhani also emphasized the relief on US-led economic restrictions — including unfreezing of about $8 billion in unfrozen assets, lifting of measures against the petrochemical and automotive sectors, and easing of the ban on insurance on transport, including of Iran’s oil exports — and he added this flourish: “Many were trying to isolate Iran, but who is isolated today? Our enemies are in fact isolated.”

Is Rouhani Giving Clue About Releasing Mousavi, Karroubi, and Rahnavard From House Arrest?

President Rouhani has followed up his celebration of the re-opening of the filmmakers’ House of Cinema with a series of tweets, accompanying his publication of a Civil Rights Charter on Thursday:

I'm not saying we shouldn't have legal framework for cultural activities but it should be 100% transparent & govt interference must be min.

He follows up with this cryptic message:

"House of Cinema" was re-opened. Hopefully, with the key people hold, other houses & locks can also be opened. #Prudence #Hope

Is Rouhani referring to the lifting of bans on other media and cultural organizations?

Or could he be suggesting that the locks can be opened on the detention of opposition leaders Mir Hossein Mousavi, Mehdi Karroubi, and Zahra Rahnavard, held under strict house arrest for 33 months?

A dispute has flared between Washington and Tehran over the details of Sunday’s interim nuclear deal.

The Iranian Foreign Ministry, which leaked the Joint Agreement to the Fars News Agency hours after it was signed, has lashed out at the presentation on the White House website of the terms. Spokeswoman Marziyeh Afkham said on Tuesday:

What has been released by the website of the White House as a fact sheet is a one-sided interpretation of the agreed text in Geneva and some of the explanations and words in the sheet contradict the text of the Joint Plan of Action (the title of the Iran-powers deal), and this fact sheet has unfortunately been translated and released in the name of the Geneva agreement by certain media, which is not true.

Afkham repeated that the four-page Joint Aseembly disseminated by the Foreign Ministry was the correct version.

The Joint Agreement, in contrast to the White House version, includes provisions on extensive sanctions relief for Iran in return for limits on enrichment. It also recognized, albeit through provisions rather than explicit language, Iran’s right to enrich.