Syria Spotlight: Latest On The Fighting Between ISIS & Northern Storm In Azaz 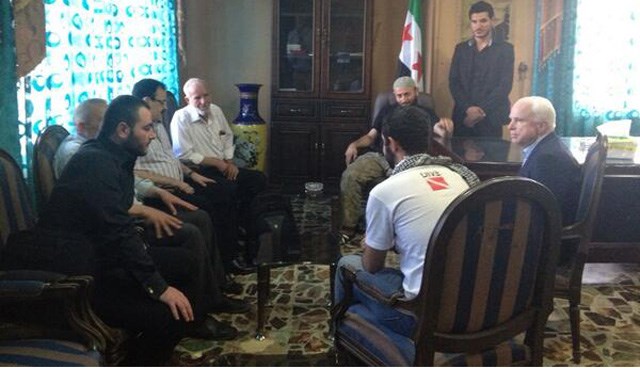 As the confrontation between Islamist faction the Islamic State of Iraq and Ash Sham (ISIS) and the Free Syrian Army’s Northern Storm Brigade continues in the border town of Azaz, a group of Islamist brigades on Thursday have issued a statement calling for a cease-fire and urging the parties to take the matter to the Sharia Court in Aleppo for further action. The statement also called for ISIS to withdraw its fighters and vehicles from Azaz and return to its main headquarters.

First they demand a cease-fire between the 2 groups. Second ISIS is to withdraw from Azaz and return to their primary bases. -3

Third, both parties must take up the matter to the Islamic Court in Aleppo, which will determine what further action will be taken. -4

The statement comes after clashes between the groups continued despite a ceasefire brokered by Liwa Al Tawheed last week. That ceasefire did not include any provision that ISIS withdraw its forces from Azaz.

The statement also comes after ISIS criticized the Northern Storm Brigade on Wednesday for what the Islamist faction said was the FSA Brigade’s association with the U.S.. The statement, which has been distributed on Arabic and Russian-language pro-jihad forums, provides a list of what ISIS sees as Northern Storm’s failings. 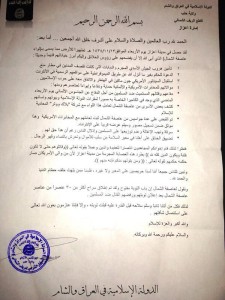 The statement, translated to English from a Russian version reads:

After the events in Azaz on 13/11/1434 in the Hijri calendar [September 19], the cleansing of the land from members of the so-called “Northern Storm Brigade” which, as Allah wished, was destined to reveal its true face in front of all creatures, we now present you with the most important facts of their treachery – both new and old:

1) Participation in the escape of criminal Assad soldiers and tanks that shelled civilians in Minagh Airbase;

2) Calling from their official website on the internet for governance not by the laws of Allah and for following the path of democracy.

3) Meeting with U.S. Senator John McCain (pictured) in the hangar and making a contract with him against the Islamists.

4) Manifestation of friendship for American and German agents, and their safety and protection , as well as providing separate shelter for them, here are some examples:

– Security and armed struggle against Muslims last Wednesday to defend a German agent, on whose camera was found photos of locations of the Islamic state, their homes and women.

– Some of the captives from the Northern Storm reported on the interaction of that brigade with the firm Blackwater, which is at war with Islam.

– After the arrest of some of the Northern Storm’s agents, they confirmed their cooperation with U.S. agents, and this is proved by a video recording of [their testimony], which will be published on the Internet soon.

– Theft from Islamic Relief, intimidation of its employees and the refusal to distribute this stolen property to Muslims, humiliating people, despite the fact that it [the property] is their legal right.

– Creation of obstacles and pressure on our families at the “As-Salam” crossing, which includes extortion of money and harassing women and humiliation of men.

In connection with the above and following the words of Allah, “Fight them until there is no [more] fitnah and [until] worship is [acknowledged to be] for Allah,” your brothers the Mujahideen went to help Aqidah and religion, in order to oust this criminal gang from Azaz, since the position of those who have shown involvement with the Americans, are akin to that which Allah said: “And he who turned to them, is one of them.”

So everyone who comes to us repentant, and who lays down their weapons before we capture them, we will accept it from them. Otherwise, we are ready uproot all of their members, with the help of Allah.