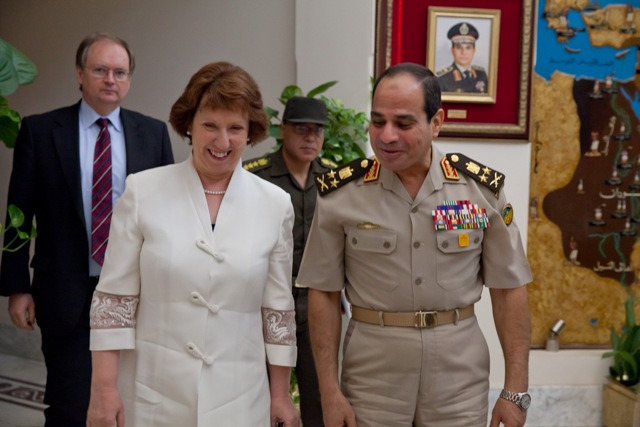 Egypt’s interim Government has rejected the plea of the European Union’s foreign policy chief, Catherine Ashton, for negotiations with the opposition.

According to European diplomats, Egyptian officials said they are not committed to an inclusive approach to negotiations with the Muslim Brotherhood — the backers of former President Mohamed Morsi, overthrown by a July 3 coup — until protests are halted.

Ashton was in Cairo from Tuesday to Thursday. She met top State officials and two representatives of the Brotherhood, Amr Darrag and Mohamed Bishr.

She basically said that we accept the new facts and that we have never denied that President Morsi made big mistakes and became out of touch; but she also said that inclusiveness is still encouraged by the EU as a key partner, who is keen for the stability of Egypt.

Ashton was told by interim President Adli Mansour and the head of armed forces, General Abdel-Fattah El-Sisi, that the Muslim Brotherhood have to stop “the attempts to resist the new reality and to stop the marches and protests for engagement to be possible”.

Ashton also protested the repression of the opposition, which has led to more than 1000 deaths since the coup: “She said that while she is not at all contesting the right of thestate to secure the safety of its citizens there is no need for aggressive security measures or for unjustified roundups as we have been hearing, not just from the Islamist quarters but also from independent human rights groups and political quarters.”