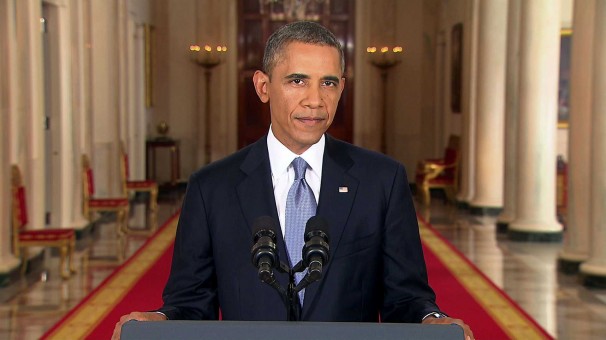 SUMMARY: Addressing the nation on television on Tuesday night, President Obama tried to send out a warning of military action, even as the US Congress and Russia had pushed Washington back from intervention.

“Our ideals and principles, as well as our national security, are at stake in Syria, along with our leadership of a world where we seek to ensure that the worst weapons will never be used,” Obama declared, almost three weeks after the Assad regime carried out a series of chemical weapons attacks near Damascus.

The 15-minute address was initially planned as a final call for support for warstrikes before Congress — which looked likely to defeat the President’s proposal — voted. However, Monday’s sudden move by Moscow, which calls for Syria to give up its chemical weapons stocks in return for a US suspension of any strikes, altered the political and military dynamics. The Senate called off its vote, scheduled for Wednesday.

Obama said of the Wednesday proposal, “It’s too early to tell whether this offer will succeed, and any agreement must verify that the Assad regime keeps its commitments.” He said the US would maintain its “current posture to keep the pressure on Assad and to be in a position to respond if diplomacy fails”.

Meanwhile, the significant maneuvers on Tuesday were around the Russian proposal and whether the UN Security Council would soon vote on it. France tried to take the initiative with the announcement that it would draft a resolution; Moscow countered with the caution that it would not accept any measure that included a provision for force against Damascus.

Footage of some of Wednesday’s clashes between insurgents and regime troops on the streets of Aleppo’s Salaheddine neighborhood.

There were also clashes in Aleppo’s Bustan Al Basha neighborhood. This video shows FSA forces firing on regime positions in the neighborhood.

Russian State news outlet RIA Novosti continues to push the message that Moscow has taken the lead in finding a “peaceful solution” to the Syrian crisis, quoting a “Russian source” as saying that Moscow has given Washington a plan to place Syria’s chemical weapons stocks under international control.

RIA reports that Russian Foreign Minister Sergei Lavrov and US Secretary of State John Kerry will discuss the plan in Geneva on Thursday.

Russia is keeping up pressure to try to avert a US-led strike against the Assad regime, with the State Duma on Wednesday calling on the international community to prevent aggression against Syria.

“Striving with all its might to to prevent a catastrophe, the State Duma appeals to the US Congress and the Parliaments of other countries not to implement a plan of aggression, and instead focus on the search for a peaceful resolution of the internal conflict, while that is still possible,” a statement adopted by the Russian Lower House read.

Footage from Wednesday claims to show the Free Syrian Army’s Tawhid Brigade shelling the Shia villages of Nubol and Zahra in Aleppo Province.

The two villages have been under siege by the FSA for some months. Insurgents say that Hezbollah fighters are concentrated in the area.

Russia continues to push the message that it is increasing its naval strength in Syrian waters, with Interfax citing another “military-diplomatic source” as saying that Black Sea Fleet’s flagship guided-missile cruiser, the “Moskva” is now in the Mediterranean and headed for the coast of Syria.

France’s draft resolution for the United Nations Security Council on Syrian chemical weapons has been posted, and it is very tough — almost certainly too tough for Russia — in its demands for enforcement.

1. “The use of chemical weapons on this scale marks the gravest escalation in the disproportionate, indiscriminate and systematic use of weapons by the Syrian authorities against its own people, and can constitute a war crime and a crime against humanity”

2. “Those responsible for attacks on civilians, and any attacks using chemical weapons, including attacks by forces under their control, must be held accountable.”

3. “The Syrian authorities shall unconditionally destruct, remove or render harmless, under international supervision and take all necessary measures and appropriate means in that regard : (a) all chemical and biological weapons and all stocks of agents and all related subsystems and components and all research, development, support and manufacturing facilities and (b) all means capable of delivering chemical weapons and related major parts, and repair and production facilities.”

4. “The Syrian authorities [will] submit to the Secretary-General, within fifteen days of the adoption of the present resolution, an exhaustive, complete and definitive declaration of the locations, amount and types of all items related to its chemical warfare program.”

5. “[A UN Mission] “will carry out immediate on-site inspections of Syria’s chemical, biological and related vehicles”.

6. “In the event of non-compliance by the Syrian authorities with the provisions of this resolution…[the UN will] adopt further necessary measures.”

The latest report from the United Nations Human Rights Council has accused both sides of committing war crimes.

The report, covering May 15-July 15, finds that Syrian troops carried out mass killings of civilians and bombed hospitals. It says insurgents are guilty of executions, hostage-taking, and shelling of civilian neighborhoods, the report added.

“The perpetrators of these violations and crimes, on all sides, act in defiance of international law. They do not fear accountability. Referral to justice is imperative, ” the UN inquiry said.

The report says Syrian forces were almost certainly responsible for two mass killings last May in which up to 450 civilians died near the city of Baniyas.

The UN team documented eight mass killings in all, attributing all but one to Government forces.

The killings in Baida and Ras al-Nabaa, two pockets of rebel sympathizers surrounded by villages loyal to President Bashar al-Assad on the outskirts of the coastal town of Banias, sent a chilling message of the price to be paid for backing the rebels.

The report does not cover the August 21 chemical weapons attacks near Damascus, but the experts said they had received allegations about the use of chemical weapons “predominantly by government forces”: “On the evidence currently available, it was not possible to reach a finding about the chemical agents used, their delivery systems or the perpetrators. Investigations are ongoing.”

The 20 investigators carried out 258 interviews with refugees, defectors, and other witnesses for their 11th report. They have not been allowed into Syria despite repeated requests.

Interfax is citing a Russian diplomatic-military source as saying that the Russian Navy has despatched a large landing craft, the Nikolai Fil’chenkov, from Novorossisk. The vessel will join the patrol ship Smetlivy, and will carry out military maneuvers in designated areas.

Heavy fighting continues in Deir Ezzor on Wednesday, with insurgents from the Free Syrian Army targeting regime bases in the city, as regime forces shell neighborhoods with artillery fire.

This footage, taken on Wednesday, shows insurgents from the Jund al-Aziz Brigade — they have a black Islamist banner although they are identified as Free Syrian Army — using a home-made mortar to fire on a regime military base (exact location not given).

Activists report that insurgents have also blown up a school building near the military airbase in Deir Ezzor that was being used as a makeshift regime army headquarters.

In addition to videos of the fighting, the Deir Ezzor Revolutionary Council published this footage on Wednesday, of a baby boy born that night in the besieged city. The baby’s father says he is determined to win freedom for his son.

Did the US Work with Russia on Chemical Weapons Proposal?

The New York Times posts an overview of the history of Monday’s proposal by Russia for Syria to give up chemical weapons stocks in return for a suspension of US airstrikes. The key points:

1. The possibility of Damascus handing over chemical weapons was first discussed in June 2012 between President Obama and Russian counterpart Vladimir Putin.

2. Putin raised the idea with Obama last Friday at the G20 summit in St Petersburg, and US Secretary of State John Kerry subsequently discussed it with Russian Foreign Minister Sergei Lavrov.

3. However, the US remained sceptical about the proposal — it was Lavrov’s seizure of an impromptu remark by Kerry on Monday that changed the dynamics and pushed Washington into accepting the plan in principle.

Video: Aftermath of Barrel Bombs on Saraqeb in Idlib Province

Footage of damage caused by the regime’s continuing attacks, including with barrel bombs, on Saraqeb in Idlib Province — activists claim at least six people were killed and dozens injured on Tuesday:

The Local Coordination Committees claim 76 people were killed on Tuesday, including 17 in Damascus and its Suburbs, 11 in Homs Province, 10 in Hama Province, and 10 in Raqqa Province.

The Violations Documentation Center put the number of dead at 72,725 since the conflict began in March 2011, an increase of 84 from Tuesday. Of the dead, 54,760 are civilians, a rise of 45 from yesterday.