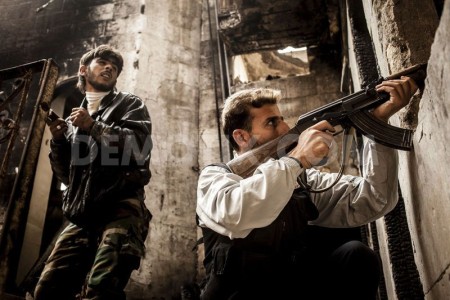 Liwa Al Tawheed posted the video announcement on its YouTube channel and webpage:

“The National Coalition and the proposed government under [provisional Prime Minister] Ahmad Tomeh does not represent us, nor do we recognise it,” the groups said in a statement published on Liwa Al Tawheed’s webpage.

The statement said, “These forces call on all military and civilian groups to unite within a clear Islamic framework that stems from Islam and is based on sharia law, and to make this the sole source of legislation.”

The statement said that its signatories rejected “outside formations” that were outside Syria “without reference to the inside” and that this was why they did not recognize Ahmed Tomeh.

The groups listed as signatories to the statement shown on Liwa Tawhid’s webpage are (NB this list only shows 11 signatories, and it is presumed that the other two joined later):

In addition to these groups, the Liwa Al Haqq – Homs and the Liwa Furqan – Quneitra also joined the agreement.

Is this a big deal? Yes, if the statement proves to accurately represent the groups mentioned and they do not immediately fall apart again, it is a very big deal. It represents the rebellion of a large part of the “mainstream FSA” against its purported political leadership, and openly aligns these factions with more hardline Islamist forces.

That means that all of these groups now formally state that they do not recognize the opposition leadership that has been molded and promoted by the USA, Turkey, France, Great Britain, other EU countries, Qatar, and – especially, as of late – Saudi Arabia.

The groups involved include the largest factions in northern Syria, as well as some groups from Homs (Al Haqq) and Damascus (Liwa Al Islam) and represent a considerable and powerful proportion of the insurgency.

Both Harakat Ahrar Ash Sham and Al Haqq are part of the Syrian Islamic Front, a group of 11 insurgent factions formed in December 2012, and which professes a more Salafist ideology. Earlier this month, the SIF published a statement on Facebook, saying that it rejected Western intervention in Syria. The organization does not seek to create an Islamic Caliphate but wants to create an Islamic State in Syria. It has carried out operations with Jabhat Al Nusra.