Syria, Sept 14: US & Russia Agree on Framework Over Chemical Weapons 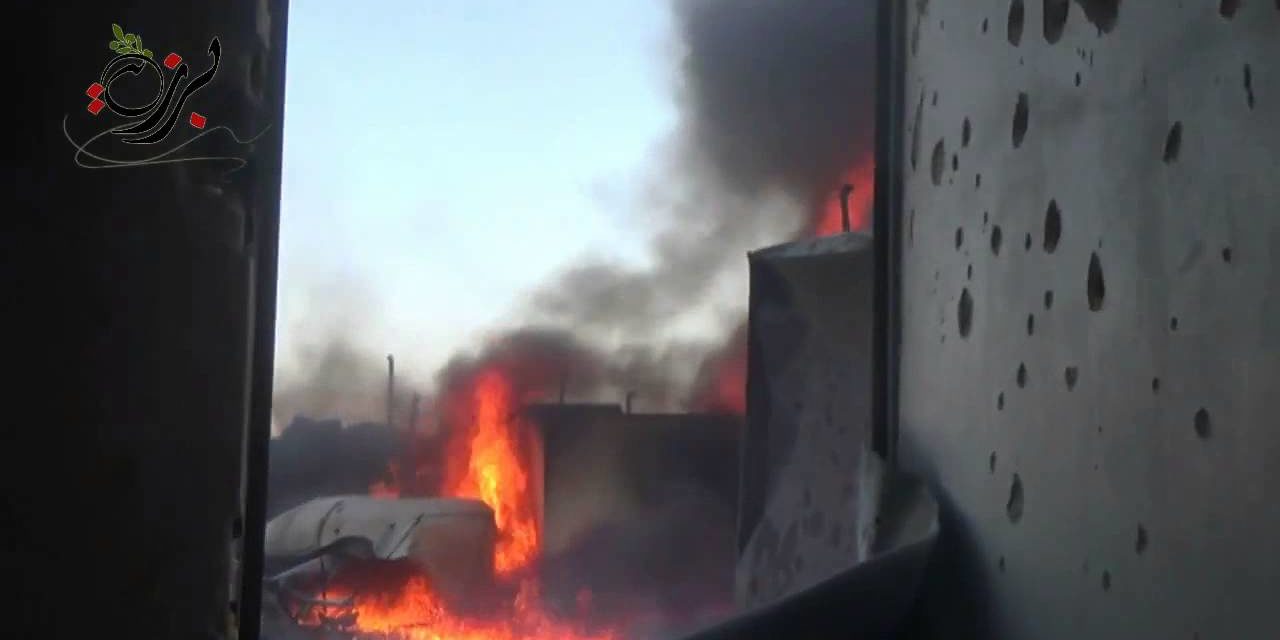 SUMMARY: As Russian Foreign Minister Sergei Lavrov and US Secretary of State John Kerry enter a third day of talks in Geneva — about Moscow’s proposal for Syria to give up chemical weapons stocks and about a long-suggested international “peace” conference — the Assad regime continues its bombing of towns and cities, hoping to use the diplomatic interval for a renewed offensive near Damascus and Aleppo.

The regime, taking the first step towards the Russian proposal, notified the United Nations that it would accede to a 1992 convention prohibiting chemical weapons, but the significant actions were more air raids and shelling of Damascus suburbs such as Barzeh and Muadamiyyat Ash Sham — site of one of the chemical weapons attacks of August 21 — and on northern towns like Saraqeb in Idlib Province.

Houses on fire in Barzeh after an airstrike:

There was a notable sequel on Friday to the bombardments, however. Protesters came out in large numbers in some of the areas hit throughout the week, such as Al-Bab in Aleppo:

Meanwhile, little of substance came out of the Kerry-Lavrov talks, with holding statements such as a US official’s “Both nations said they wanted to renew efforts to negotiate a peaceful end to the war in Syria.”

The immediate spur for the discussions is the Russian proposal — with one barrier being whether to provide for the use of force if Syria does not comply with the demand to hand over chemical weapons — but Kerry and Lavrov are also seeking to renew their spring initiative for a “Geneva II” conference bringing together the regime and opposition groups.

That effort, which originally set talks for June, has been effectively blocked by continued fighting and by the opposition demand that President Assad step aside before discussions begin.

Obama Welcomes US-Russia Agreement But “We Remain Prepared to Act”

President Obama has welcomed Saturday’s US-Russia framework agreement to secure and destroy Syria’s chemical weapons, but says the US remains prepared to act if diplomacy fails.

Obama said that the world now has the chance to eliminate Syria’s stockpile in a transparent, expeditious, and verifiable manner; however, he said more work remains to be done and the internatinal community expects Syria to live up to its public commitments.

Kerry: US, Russia Agreed On Steps Syria Must Take Over Chemical Weapons

Following a third day of talks in Geneva, US Secretary of State John Kerry told reporters on Saturday that the US and Russia have agreed on the steps that Damascus must take to verify that it is getting rid of its chemical weapons.

According to Kerry, Washington and Moscow have agreed that Syria must submit a “comprehensive list” of its weapons of mass destruction within seven days, that Syria must provide the immediate right to inspect all chemical weapons sites, and that the weapons will eventually be taken outside Syria to be destroyed by mid-2014.

Lavrov called the agreements a “decision based on consensus and compromise and professionalism”, but cautioned about any conclusion that force was being authorised in the event of Syrian non-compliance:

Nothing is said about the use of force or about any automatic sanctions. All violations should be approved by the Security Council.

Lavrov: Third Day Of Talks With Kerry Were “Excellent”

Interfax is reporting that Russian Foreign Minister, Sergei Lavrov said Saturday that the third day of talks with US Secretary of State John Kerry had been “excellent”.

Heavy clashes between regime forces and insurgents are continuing on the outskirts of ‘Atman, to the north of Dar’aa city, continues on Saturday after regime MiG warplanes launch air raids on the town this morning. Insurgents are calling the fighting the Battle for the Gateway To Dar’aa.

This footage, posted by media activist and citizen journalist Abo Gamal (the man in the striped shirt seen in the videos), shows regime forces targeting insurgents with tank shells:


Insurgents fire at regime forces using a machine gun fixed to the back of a truck:


Obama: US Will Maintain “Military Posture” To Pressure Syria

Washington will continue to use the threat of military action to pressure Syria, President Obama said in his weekly address on Saturday, adding that the possibility of a diplomatic solution over the Syria crisis arose “in part because of the credible threat of US military force.”

The President added, “But we’re making it clear that this can’t be a stalling tactic…Any agreement needs to verify that the Assad regime and Russia are keeping their commitments: that means working to turn Syria’s chemical weapons over to international control and ultimately destroying them. This would allow us to achieve our goal — deterring the Syrian regime from using chemical weapons, degrading their ability to use them, and making it clear to the world that we won’t tolerate their use.”

Ever since the August 21 chemical weapons attacks on the Damascus suburbs, the regime has maintained an offensive aimed at retaking key neighborhoods, roads and towns on the outskirts of the capital, and aimed at subduing insurgent forces and civilians in insurgent-controlled areas.

That offensive has used airstrikes, artillery and rocket shelling against civilian and insurgent targets, but also ground troops — including tanks — to try to take key positions.

One of the fiercest battles is being waged on the Southern Bypass road that runs on the outskirts of the Zamalka neighborhood in Damascus, one of the sites of the August 21 chemical attacks.

The regime is desperate to control that road, so that its convoys can pass through unharmed. On Saturday, fierce clashes between regime ground forces and insurgents continued on the road near Zamalka.

[UPDATE] Footage from Saturday shows a regime tank hit by insurgents on the road near Zamalka:

On Friday, insurgents managed to hit and destroy regime T-72 tanks as they tried to make advances along the road:

Another view of a destroyed tank:

Also on Saturday, the regime continues airstrikes against Jobar in northern Damascus.

The Violations Documentation Center puts the number of dead at 72,998 since the conflict began in March 2011, an increase of 101 from Friday. Of the dead, 54,872 are civilians, a rise of 49 from yesterday.