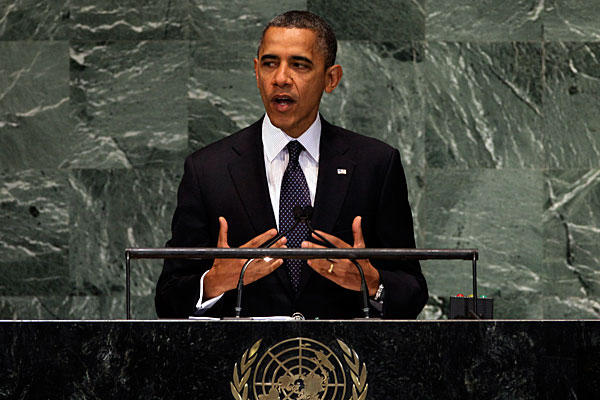 Footage shot on Tuesday shows FSA fighters shooting at regime forces. There are claims that the FSA have managed to repel an attempt by “shabiha” — pro-Assad forces — to storm Barzeh.

Also on Tuesday, activists reported that Assad’s forces have subjected the neighborhood to heavy artillery shelling.

Barzeh is one of the key neighborhoods and towns in the Damascus suburbs that the regime has been attempting — and failing — to control for months.

The regime has also continued to target other Damascus suburbs with heavy shelling, including Zamalka.

In his speech to the United Nations General Assembly, President Obama has condemned a range of groups:

Peaceful protests against an authoritarian regime were met with repression and slaughter. In the face of carnage, many retreated to their sectarian identity – Alawite and Sunni; Christian and Kurd – and the situation spiraled into civil war. The international community recognized the stakes early on, but our response has not matched the scale of the challenge. Aid cannot keep pace with the suffering of the wounded and displaced. A peace process is still-born. America and others have worked to bolster the moderate opposition, but extremist groups have still taken root to exploit the crisis. Assad’s traditional allies have propped him up, citing principles of sovereignty to shield his regime. And on August 21st, the regime used chemical weapons in an attack that killed more than 1,000 people, including hundreds of children.

Beyond his rhetoric, Obama limited his substantive remarks to “the international community must enforce the ban on chemical weapons”, invoking “memories of soldiers suffocated in the trenches; Jews slaughtered in gas chambers; and Iranians poisoned in the many tens of thousands” as he repeated that “the evidence is overwhelming that the Assad regime used such weapons on August 21st”:

There must be a strong Security Council Resolution to verify that the Assad regime is keeping its commitments, and there must be consequences if they fail to do so. If we cannot agree even on this, then it will show that the U.N. is incapable of enforcing the most basic of international laws. On the other hand, if we succeed, it will send a powerful message that the use of chemical weapons has no place in the 21st century, and that this body means what it says.

Obama then called for “a larger diplomatic effort to reach a political settlement within Syria” — withoout giving any details of such a settlement, such as whether President Assad would retain power — and more humanitarian aid. He did not refer to the Assad regime’s use of conventional weapons, including bombs, missiles, and rockets.

The President complained about criticism of Washington’s handling of the crisis:

The United States is chastised for meddling in the region, and accused of having a hand in all manner of conspiracy; at the same time, the United States is blamed for failing to do enough to solve the region’s problems, and for showing indifference toward suffering Muslim populations.

The Russian-language pro-jihad site FiSyria has released two new videos showing Umar Al Sishani [“Umar the Chechen”], who has the joint role of the Northern Emir of the Islamic State of Iraq and Ash Sham and the commander of the Jaish al Muhajareen wal Ansar (Army of Emigrants and Helpers), discussing recent operations near Hama.

Al Shishani describes the battle as a “military operation”, and explains that the operations were conducted on a large-scale and involved a number of different military tactics.

The Mujahideen overran two bases in the vicinity of Hama and captured armored vehicles, missiles, ammunition, and radars which were taken out of the bases to a safe location. The claim is that 1,000 fighters, including 19 suicide bombers, took part in the battles.

Here, Al Shishani explains the battle and says that the weapons were captured, including tanks:

In this video, Al Shishani shows off what he says are radar equipment taken in the battle, and explains that it is very valuable. The Mujahideen, he says, will now return the money that was donated to buy weapons. In another section, Al Shishani shows off a radio: “Here you can hear, one, two, three,” he notes, adding that the most important thing is that there is an air conditioner. Al Shishani then shows some of the vehicles captured in the raid.

According to the Chechnya-based pro-jihad site Kavkaz Center, Jaish Al Muhajideen wal Ansar consists of around 3,000 fighters from former Soviet republics and areas including Russia, the “Caucasus Emirate” [a reference to Chechnya], the Crimea and other areas in Ukraine, as well as from other countries in Europe, Arab states, Central Asia, and also Syrians.

Kavkaz Center said that the largest division within Jaish is the Az-Zubayr unit, which is commanded by Emir Sallahuddin.

Also according to Kavkaz Center, on Monday, fighters from Jaish were involved in clashes near Al Qusayr in Homs Province, where they killed a pro-Assad commander named Moussa Al Jazrawi.

The Violations Documentation Center puts the number of dead at 73,903 since the conflict began in March 2011, an increase of 50 from Monday. Of the dead, 55,383 are civilians, a rise of 26 from yesterday.