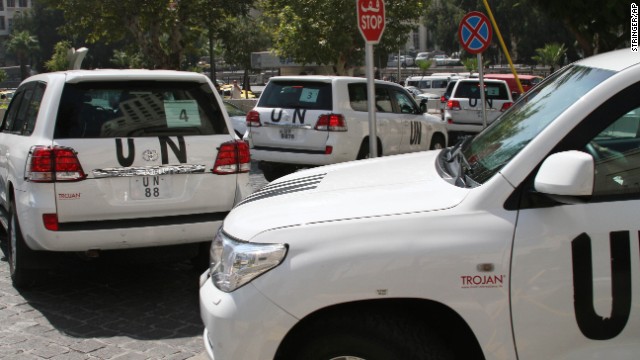 LATEST: US State Department: “We Cannot Be Held Up by UN”


US State Department: “We Cannot Be Held Up by UN”

Another extract from tonight’s State Department briefing, by Marie Harf, pointing to US action outside the UN and any Security Council meeting:

We cannot be held up in responding by Russia’s continued intransigence at the United Nations, and quite frankly the situation is so serious that it demands a response.

Syria cannot hide behind Russian intransigence at the Security Council. It is unacceptable.

It appears that the British Government has put language into the motion for Thursday’s Parliamentary debate that backs away from immediate military action, moving towards Russia’s demand that the Council not pre-judge any findings from the UN inspectors in Syria:

The United Nations Security Council must have the opportunity immediately to consider that briefing and that every effort should be made to secure a Security Council Resolution backing military action before any such action is taken.

Read the full text of the Government motion

Obama Administration Hints At Attack While Inspectors Still in Syria

Josh Rogin of The Daily Beast puts out a message which indicates that Washington may launch airstrikes even if UN inspectors have not left Syria. He cites the State Department’s liaison with Syrian groups and the head of the Syrian Military Command, Salem Idriss:

Meanwhile, the State Department, through spokesperson Marie Harf, appears to be already dismissing any significance for the UN Security Council meeting:

State/Harf says no point in seeking vote at UN due to Russia's "continued intransigence" on holding Syria to account.

Harf on UN request for 4 more days: "We are making our own decisions on our timeline."

Halqi made the surprising accusation that it was the US and Israel who had “created terrorism and Al Qaeda”. The Syrian Premier added: “US, Western and Israeli use of lies and false pretenses like the use of chemical weapons to carry out military intervention in Syria came about because of the Syrians’ steadfastness and the victories of the Syrian Army over terrorism.”

Halqi added that Islamist insurgent faction Jabhat al-Nusra was a “pawn of Washington and Israel used for carrying out their plots”. One of those schemes, Halqi explained, is to “keep the Arab people occupied with internal conflicts.”

Halqi dismissed the current threat of U.S. strikes against the Assad regime as “colonialist” and added that all was well in the country. “The Syrian people are going about their normal lives,”he concluded.

In Damascus, Civilians Prepare For Strikes

Damascenes are hoarding supplies while others are trying to leave the capital ahead of possible Western military strikes.

While Reuters do not refer to a specific Damascus neighborhood, the story mentions to pro-Assad and more affluent areas of the center of the capital.

In a city where dozens of military sites are mixed in among the civilian population, many worry Damascus could become an especially dangerous place should a Western-led strike come in response to the apparent use of chemical weapons last week that killed hundreds in the suburbs.

At grocery stores, shoppers loaded up on bread, dried goods and canned foods, fearing they may face shortages if a strike hits the city. The items most in demand were batteries and water.


Assad Appears To Be Evacuating Army, Security Personnel From Damascus

Reuters is citing residents and opposition sources in Damascus as saying that the regime appears to have evacuated most personnel from army and security command headquarters in the center of the capital, including the General Staff Command Building on Umayyad Square, the nearby air force command and the security compounds in the Western Kfar Souseh districts.

One source told Reuters that units stationed near Damascus have confiscated several trailer trucks, apparently to transport heavy weaponry to alternative locations. However, Reuters say that no significant movement of military hardware has been reported, possibly due to heavy fighting near major highways.

The regime also claims gains in Jobar, where SANA reports Assad’s forces “killed all members of an armed terrorist group to the south of Electricity Company in Jobar”.

United Nations Secretary-General Ban Ki-Moon has said that UN inspectors need four days in Syria to conclude their investigation and analyze findings — an indication that there will be no US-led military action before Sunday.

Meanwhile, with the Security Council due to meet this evening to consider a British resolution, Russia said that it was premature to aniticipate any reaction by the Council before the inspectors released their findings.

“Discussing some sort of reaction by the Security Council before UN inspectors working in Syria publish their report is at the very least untimely,” First Deputy foreign minister Vladimir Titov said.

U.S. Says Any Strikes On Syria Won’t Be Unilateral

AFP cite a “senior U.S. administration official” as saying that Washington has ruled out unilateral military action against Syria, but would include “international partners”.

“Any military action would not be unilateral. It would include international partners…The options are not limited just to one day,” AFP quote the official as saying.

The UN-Arab League special envoy for Syria, Lakhdar Brahimi, told reporters in Geneva on Wednesday that a chemical substance had been used in the attacks in the Damascus suburbs on August 21.

Claimed footage from Wednesday showing the UN inspection team in Zamalka, East Ghouta, accompanied by FSA insurgents. Zamalka is one of the East Ghouta sites targeted by chemical weapons a week ago.

Does the visit to East Ghouta — which come amid a temporary cessation of regime attacks on the area — signal that Syrian President Bashar al-Assad is buying time ahead of likely US strikes? The regime has been waging a ferocious offensive against East Ghouta and the UN inspection team’s visit to the area comes after Syrian Foreign Minister Walid Al Moallem said Tuesday that the regime would not stop its strikes against East Ghouta.

The UK on Wednesday has said that it will put a resolution to the UN Security Council to “authorize necessary measures to protect civilians”.

1/3 We've always said we want the UN Security Council to live up to its responsibilities on Syria. Today they have an opportunity to do that

3/3 The resolution will be put forward at a meeting of the five permanent members of the Security Council later today in New York.

There are reports and amateur video claiming that the UN inspectors have visited Al Mleha in East Ghouta as part of their investigation into last week’s chemical weapons attacks. The UN Spokesperson has remained silent on any visit, however, but did tweet that the UN Secretary General had met the Organization for the Prohibition of Chemical Weapons regarding the UN chemical weapons inspectors.

Another video shows the UN inspection team’s convoy passing through the town of Irbeen, en route to Zamalka.

Claimed footage of the inspectors arriving in Al Mleha:

British Prime Minister David Cameron has spoken for the second time with US President Barack Obama as strikes on Syria loom.

The BBC report that Cameron “heard the “latest on US thinking” on the issue.

The UK’s National Security Council will meet at noon on Wednesday ahead of a parliamentary vote on Thursday.

The BBC cite a Downing Street spokesman as saying:

“Ahead of today’s NSC, it was an opportunity for the PM to hear the latest US thinking on the issue and to set out the options being considered by the government.

“Both leaders agreed that all the information available confirmed a chemical weapons attack had taken place, noting that even the Iranian President and Syrian regime had conceded this.

“And they both agreed they were in no doubt that the Assad regime was responsible.

“Regime forces were carrying out a military operation to regain that area from the opposition at the time; and there is no evidence that the opposition has the capability to deliver such a chemical weapons attack.


Lavrov Urges Kerry To Wait For Results Of UN Investigation

In a telephone call on Tuesday, Russian Foreign Minister Sergei Lavrov urged U.S. Secretary of State John Kerry to await the results of the UN investigation into last Wednesdays chemical weapons attacks on the Damascus suburbs. Lavrov said that a chance must be given for a political solution to the Syrian crisis.

Russia’s Emergency Situations Ministry on Wednesday evacuated a second group of citizens from Syria, amid looming U.S. strikes against Assad. The group consisted of 27 citizens, mostly women and children, from Latakia. Earlier, a first group of 89 citizens, 75 of whom were Russians, were evacuated.

Moscow has said that it has not yet evacuated its diplomatic personnel.

The regime continues to shell the Al Qaboun neighborhood of Damascus from Mount Qasioun.

Activists and citizen journalists on Wednesday report that the regime has used low-potency toxic organophosphates in a mortar attack on Jobar, Damascus. The attack caused affected civilians to present with mild symptoms of asphyxiation.

The regime continues its airstrikes against Ariha in Idlib Province, which insurgents captured several days ago. This footage, posted Wednesday, shows a strike on Tuesday:

The Local Coordination Committees claim 79 people were killed on Tuesday, including 25 in Aleppo Province, 22 in Damascus and its suburbs, and 15 in Homs Province.

The conclusion of “not if, but when” with US-led airstrikes inside Syria was reinforced on Tuesday.

While White House spokesman Jay Carney put out the holding statement, “A decision has not been made,” Secretary of Defense Chuck Hagel said U.S. forces were ready to attack if President Obama gave the word, and Vice President Joe Biden declared that there was “no doubt” over a regime chemical weapons attack last Wednesday near Damascus.

British, French, and Italian leaders all offered messages of support.

But when will the airstrikes begin? One important clue will be the departure of United Nations inspectors from Syria.

After days of pressure on the Assad regime, the inspectors were allowed on Monday to visit a single site in West Ghouta, but only for a limited time. They were then blocked from visiting another six sites in East Ghouta, where the most attacks and deaths occurred.

On Tuesday, the Assad regime’s resistance appeared to continue, as the UN announced that inspections of the second site been postponed for 24 hours. The prospect rose that, instead of persisting, the inspectors would now depart — their safety in Damascus might not be assured in the event of any US-led airstrikes.

But have they already gone? The notice of postponed inspections was the only message issued by the UN all day. The possibility is that, with an attack imminent, the inspectors were quietly spirited out of Syria.

If so, the US-led airstrikes may begin this evening.