Syria, August 1: Regime Shows Off Its Victory in Homs 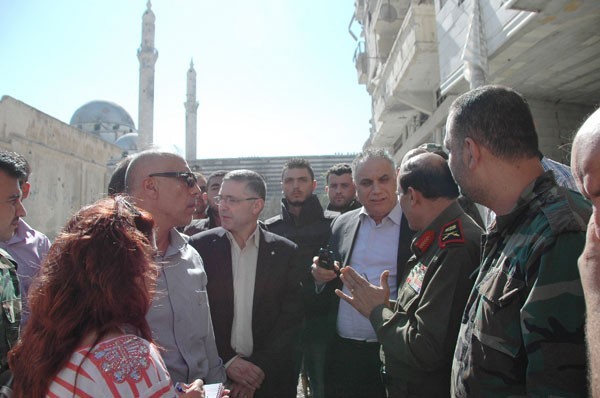 The Assad regime showed off its victory in Homs on Wednesday, with Minister Ali Haidar and Homs Governor Talal al-Barazi doing a photo-opportunity walkabout of Khalidiya, the section taken on Monday by the Syrian military after weeks of attacks.

Photographs played up the symbolism of the 12th-entury Khalid Ibn al-Walid Mosque, heavily damaged by regime shelling. Haidar, who oversees “National Reconciliation”, said the “destruction caused by terrorists is clear proof of their blind hatred which masquerades as religious to wreak havoc in cities, spreading death and devastation”. 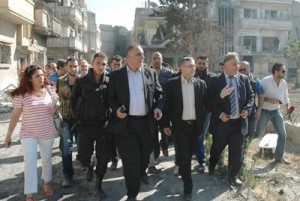 The Minister said the purpose of the photographed tour was to “document these acts to serve as a reminder”.

So is this proof that the regime has “won” in Homs once and for all? Perhaps this video will serve as a caution.

In March 2012, there was another walkabout by a prominent Government figure declaring victory as he visited the Syrian victory — President Assad touring the section of Bab Amro, taken by the military after weeks of deadly bombardment:

A 500 meter deep bore hole was drilled on Thursday to provide a fresh water supply for Syrian refugees in the new Al Azraq refugee camp in Jordan.

NGO Mercy Corps and UNICEF has been constructing a new water system in Al Azraq, which is set to open soon.

In an article earlier this month, UNICEF explained more about the camp.

Regarding the water supply, UNICEF wrote:

[Jordan’s] Ministry of Water and Irrigation has identified two sites for boreholes, but accessing water in the fourth most water-scarce country is a serious challenge – and costly.

Water will be pumped from a depth of 500 metres from the second aquifer identified. The first is protected, as it’s a source of water for the nearby town of Azraq.

“The water will be delivered from the boreholes directly to overhead tanks, and from there water will flow by gravity to the service areas,” Mr. Goyol says.

A total of 1.5 million litres of water a day, 30 per person, will be supplied. It’s twice the minimum humanitarian standard of 15 litres per person per day.

With the population of Jordan’s towns and refugee camps bursting at the seams, it’s a race against time to get the site operational. And after a day in the intense desert heat, Mr. Goyol takes time to reflect.

“As you can see, the terrain and environment is harsh. It’s going to be difficult for everybody,” he says. “But we hope these facilities and services we’ve put in place will help make it more habitable for the refugees.”


Insurgents Hit Regime Arms Depot, But Were There Civilian Casualties?

An EA correspondent, with excellent contacts inside Syria, offers more information on Thursday afternoon’s rocket strike by insurgents on a regime arms depot in Homs….

The Syrian Observatory for Human Rights has been circulating the claim that 22 people were killed in the attack, but the EA correspondent writes, “I’m quite sure there were no civilian casualties, other than those made up by regime. Waiting for further info.”

Footage Of Aftermath Of Rocket Bombardment On Al Wa’er, Homs

Earlier on Thursday, we reported on regime attacks on the Al Wa’er district of Homs this morning.

Since that report, activists posted this footage of a rocket attack on the neighborhood on Thursday. Activists claim that several people have been killed and more injured, though the exact death toll is not known.

Activists on Thursday posted this footage showing the extent of the destruction in Homs.

Picture: Assad Does Photo-Opportunity with Troops

State media feature a photograph of President Assad greeting troops in the Damascus suburb of Daraya to mark Army Day. 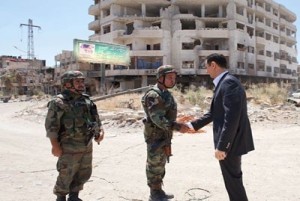 According to State news agency SANA, Assad declared that “the enemy, despite all of its attempts and those standing behind it, has failed to kill the pride and courage of the Syrians as it found itself faced with an army that knows no defeat nor fear”.

Head of Opposition Coalition: No Talks Before Advance on Battlefield

Ahmad Asi al-Jarba, the head of the Syrian National Coalition, has said that he will not join “peace” discussions before insurgents make progress on the battlefield.

Al-Jarba said to a Qatari State news agency, on a visit to Doha, “We will not go to any negotiations until the Free Army and revolutionary forces are strong on the ground and cohesive as they were eight months ago.”

The US and Russia have declared this spring that they will convene a conference in Geneva to agree on a plan for transitional government. The Coalition has said it will not attend unless President Assad agrees to step down.

Last week, al-Jarba told the United Nations Security Council that the coalition was ready to attend a peace conference if the Assad regime committed itself to implement a plan handing over power to a transitional administration.

Syrian activist Abu Rami on Wednesday gave an interview from Homs to CNN’s Hala Goarani. The main message — that what the regime is touting as a victory in part of the city came after a month of extremely heavy bombardment in which Assad used heavy weaponry — tank shells, airstrikes — against the insurgents.

Abu Rami said Homs had endured “a whole month of bombardment with all of the heavy weapons that one can imagine, he used — anti aircraft, in addition to mortars and airstrikes.”

Abu Rami told Goarani about a recent missile strike that he witnessed:

In the middle of shelling and bombardment I went out to the streets and saw a very large missile falling on the ground and I had to hide inside a basement because the explosion was so big… when we went out after about half an hour, there was smoke everywhere, and the picture you see [Amanpour showed viewers a photograph Abu Rami took] was a big building of six floors all destroyed…

We heard voices under rubble saying “help us,” but the rubble was so thick we were unable to take all blocks from ground… after hours we managed to pull one survivor out but another person was dead….

We asked the survivor, “who is left there?” and he said “about four civilians are left, please help them” — but unfortunately we were unable to pull them from there and they are still under the rubble for the second day in a row.

US officials have told The New York Times that American intelligence analysts have concluded that a recent Israeli airstrike on a Syrian port did not succeed in destroying all of the Russian-made anti-ship cruise missiles that were targeted.

The US officials said Russia recently sent SA-26 antiaircraft missiles to Syria, and they believe Moscow despatched to technical experts to help set up the system.

Russia also recently delivered two refurbished Mi-24 Hind helicopters to the Russian naval base at Tartous for use by the Syrian military, according to the officials.

Even as the regime used State media to declare a “victory” in Homs, activist footage posted overnight and Thursday morning shows a continued bombardment of parts of the city, particularly the Wa’er neighborhood, where amateur footage show civilian homes under heavy fire.

According to UNHCR, Al Wa’er is home to an estimated 400,000 people, half of whom have been displaced from other areas of Homs Province – mainly Baba Amer and the old city of Homs.

This video shows an overnight airstrike on the Homs suburb:

The Local Coordination Committees claim 93 people were killed on Wednesday, including 30 in Damascus and its suburbs, 18 in Aleppo Province, 12 in Homs Province, and 11 in Daraa Province.

The Violations Documentation Center puts the number of dead at 68,106 since the start of the conflict, a rise of 154 since Wednesday. Of these, 51,700 are civilians, an increase of 116 from yesterday.