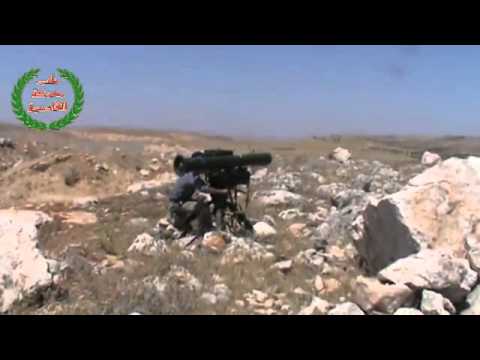 The New York Times adds detail to the story of foreign weapons for the insurgency, revealing that Sudan has been one of the sources for Qatar’s supply of Chinese-made arms.

Over the last six months, reports have gradually established Qatar’s provision of weapons, including arms from Libya and the supply route through Turkey. Recent video has shown advanced arms such as Chinese-made HJ-8 missiles in the hands of some brigades. Elements of the Syrian Islamic Front, including the leading faction Ahrar al-Sham, have been primary beneficiaries, and the weapons have been part of the story of recent insurgent advances in some areas of Syria.

See Syria Special: Who’s Important Within the Insurgency…and Who Funds Them

Eric Schmitt and C.J. Chivers of the Times use “Western officials and Syrian rebels” to claim political motives — support of Sunni Islamist movements — and financial incentives for Sudan:

“Qatar has been paying a pretty penny for weapons, with few questions asked,” said one American official familiar with the transfers. “Once word gets out that other countries have opened their depots and have been well paid, that can be an incentive.”

The shipments have been far from problematic. Syrian insurgents said the FN-6 missiles had been disappointing and even deadly, killing men trying to fire them. And the politics on the ground has been complicated: Qatar and Saudi Arabia have clashed in their support of different factions, and US reluctance to support overt arms provision has undermined efforts at co-ordination.

A Qatari official said he had “no information” about the alleged arms transfers, and Sudanese officials denied the claims.

This is not the first time Sudan has been at the center of a story of weapons supply: last October, Israel attacked a Sudanese factory, alleged to be supplying arms to Israeli foes in the Middle East.

The al-Qadisiyah Brigade and Jabhat al-Nusra celebrate the capture of a regime checkpoint in the al-Hawiqah district of Deir Ez Zor:

Amid sounds of the fighting in Deir Ez Zor, Syria’s seventh-largest city, the sudden fire and smoke from a Vehicle Improvised Explosive Device — set by the Islamist faction Jabhat al-Nusra:

Two more examples from the mainstream media of scary portrayals simplifying and distorting the Syrian conflict….

CBS News goes for “Syria Power Vacuum Could Pave Way for Al Qaeda Leadership“, based on a State Deaprtment press release, a hyperbolic sound-bite from a high-level CIA official, and rhetoric from its correspondent.

However, the more serious case of exaggeration and distortion is in The Washington Post, “Al-Qaeda Expands in Syria Via Islamic State“.

The Post’s article offers the potential for an examination of an important case. In the battle for control of Raqqa, the largest city held by insurgents, the Islamic State of Iraq and as-Sham has carried out abductions and beatings.

However, that story is buried beneath the headline, wild and unsupported references to “beheadings” and other killings, omission of any other factions involved in the Syrian conflict, and generic statements from analysts.

We will have more on this on Wednesday in an analysis and a feature on the Islamic State of Iraq, the Islamist faction Jabhat al-Nusra, and Raqqa.

The Islamic State of Iraq and as-Sham has put out its version of events on the “Purification of the Coast” offensive in northern Lattakia Province.

The ISIS said 12 villages have been captured by insurgents, and three others are on the verge of being taken. Opposition fighters are now moving on Prophet Yunus mountain and are “within a stone’s throw” of Qaradaha, President Assad’s ancestral town.

An 8 1/2-minute video from the Islamist faction Harakat Ahrar al-Sham celebrates the overrunning of the base of a Syrian Army transport battalion in Daraa Province in southern Syria:

Video: Islamic State of Iraq and as-Sham Fighter Promotes Its Help for Women and Children in Lattakia Offensive

A video promoting the Islamic State of Iraq and as-Sham proclaims its help for women and children in the Lattakia offensive, with testimony from a woman holding a child and a statement from an ISIS fighter:

[Editor’s Note: We later went back to this story after a fuller version of the video appeared. The ISIS said it had taken the women and children after men had fled from a village captured by the insurgency. The woman in the video says the captives are being treated well, but they are being held hostage until detainees are freed from regime prisoners. The ISIS fighter reinforces that statement.

We searched for further information about the fate of the women and children, but could not ascertain what ocurrred.]

On the 9th day of the offensive in northern Lattakia Province, members of the Ahrar al-Sham brigade move artillery towards Prophet Yunus mountain.

Media activists and citizen journalists from the Shaam News Network have created this English-language subtitled video showing the aftermath of a regime airstrike on the village of Salma in Latakia Province. Salma was captured by insurgents as part of a wider offensive in Latakia, and the airstrikes are in retaliation.

The video captures the shock of local residents in the immediate aftermath of the strike, as they survey the extensive damage to property and prepare to discover and identify victims buried or trapped under rubble.

State Media: All Is Well In Damascus, Where Tourism Ministry Is Building A New Tourist Complex

As the Assad regime celebrates the sacrifices of “martyrs” in Shahba, and as the State Minister for National Reconciliation Affairs expressed optimism that”most European countries are now seeking new communication channels with Syria”, the Ministry of Tourism on Monday went a step further, granting a license for a brand-new 4-star tourist complex in al-Rawda in Damascus countryside at a cost of SYP 554 million.

The Fatah Brigade YouTube channel has posted several videos showing Abu Jandal Al-Masri (“Abu Jandal The Egyptian”), identified here as from the Jaish al-Muhajirin wa Ansar (Army of Emigrants and Helpers), inside the insurgent-held Menagh Airbase. The videos are apparently shot by a cellphone, given their poor and very shaky quality.

Here, Abu Jandal is inside “the nests of the Assad gangs” — some sort of office inside the base — and is shown cursing Syrian President Bashar al-Assad, stamping on a Syrian flag and stabbing what appears to be a picture of Assad with a sword.

Abu Jandal waving his sword with fighters from the Islamic State of Iraq:

Here, Abu Jandal claims that documents he has found in the airbase point to a collaboration between the Syrian regime and Iran (however, Abu Jandal does not show the viewer much more than the document’s cover):

The perpetual delay in the proposed “peace” conference, put forth by the US and Russia in April, was re-confirmed on Monday.

Russian Deputy Foreign Minister Gennady Gatilov said the gathering is unlikely before October because of ” busy diplomatic schedule: “It is unlikely to happen in September because there are different events, including the ‘ministerial week’ at the UN General Assembly.”

Gatilov said more talks were expected at the end of August to prepare the “Geneva II” conference: “We are for it happening as soon as possible, but we need to be realistic about circumstances which could effect the forum.”

The opposition Syrian National Coalition has refused to attend the conference without an assurance that President Assad will leave power. Disputes have also arisen over the international participants, with the US objecting to an Iranian presence.

A Regime Ceremony for “Martyrs” in Southern Syria

State news agency SANA features the unveiling of a memorial in Shahba, near the Jordanian border, to recognize “martyrs” and hail “the role of the Syrian Arab Army and its victories over the armed terrorist groups”.

Families of some of the 125 martyrs named on the memorial expressed pride in “their sons’ sacrifice” and also praised the military for “facing the global war launched on Syria by the colonial western counties and their tools in the region”.

A local official said “the memorial is 3 tons weight and 5 Meter length”. 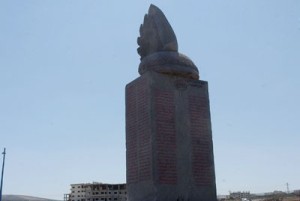 The Local Coordination Committees claim 60 people were killed on Monday, including 17 in Aleppo Province and 15 in Damascus and its suburbs.

The Violations Documentation Center puts the number of dead at 69,365 since the start of the conflict, a rise of 114 since Monday. Of these, 52,438 are civilians, an increase of 54 from yesterday.