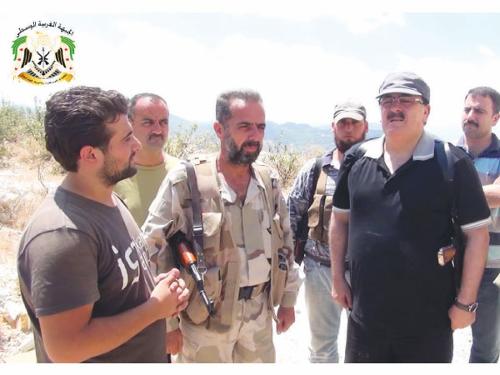 Criticised in recent months over lack of organization and effectiveness, with Islamist factions grabbing headlines for their supposed supremacy in the insurgency, the Free Syrian Army and the Syrian Coalition have begun a PR offensive to emphasize their gains during Ramadan.

Dubbed the “Month of Victories”, the campaign hits back at a near-exclusive focus in mainstream media on non-FSA groups, particularly after the capture of the regime’s Menagh Airbase in Aleppo Province, including the narrative that the Islamic State of Iraq and As-Sham is leading the fight rather than the “loosely-organized” FSA.

One of the PR challenges for the FSA is that Islamist groups like ISIS are easier to track than individual FSA brigades. Moreover, ISIS and Jabhat al-Nusra fit the reporting trend of “foreign jihadists” and “Al Qaeda-linked groups taking over the insurgency”, sensationalist themes which make for good headlines and feed Western fears of “Islamists” and “terror attacks”.

Trying to push back this week, the Syrian National Coalition issued an English-language report, “Ramadan: A Month of Victories“, detailing the advances of FSA forces by area and including a list of the brigades involved in the fighting.

In a press conference on Thursday, Coalition media spokesman Khalid Saleh portrayed the leadership of the Supreme Military Council in reversing the regime’s “fairly small” gains before Ramadan — particularly in its capture of Qusair in Homs Province — relying on “foreign militias specifically the militias of Hezbollah and militias from Iran”.

In contrast, Saleh said the FSA were able to achieve “over 63 strategic victories” during Ramadan.

Saleh listed claimed control of 35 regime checkpoints: “When I used the term “checkpoints”, the regime usually has anywhere between 300 to about 1200 to 1500 soldiers in each one of those checkpoints, in addition to tanks and BMP fighting vehicles.”

The spokesman also highlighted the FSA’s capture of the strategic village of Khan Al Assal, cutting off vital supply lines from the regime in West Aleppo.

Saleh said the FSA started the “liberation fight to liberate [Syria’s 7th-largest] city of Deir Ez Zor. The province of Deir Ez Zor is fully liberated except for the city, and now the FSA in the last four days announced the final process of liberating the city”.

Saleh said the recent operations in the Syrian Coast had begun to “emphasize the importance of the unity of Syrian territories; that we are keen to liberate all parts of Syria from the tyranny of Bashar Assad”

General Salem Idriss, the head of the Supreme Military Council, had visited Lattakia to “make sure to show [his] support to the fighters in the Syrian Coast by visiting the area, which was done in cooperation with active leaderships on the ground there”.

We are working around the clock to get more support to the Syrian Coast. Yesterday, the Syrian National Council, one of the blocs of the Coalition, earmarked a sum of money to support fighters in the Syrian Coast as well as in Deir Ez Zor.

In contrast to what he portrayed as FSA’s growing strength, Saleh said the Assad regime is increasingly reliant on military assistance from the Lebanese organization Hezbollah.

[Assad’s] army- his capabilities have been degraded over the last few months. Now, he is having to rely on Hezbollah’s militias fighters, who are fairly well trained. I mean those are fighters who fought against Israel back in 2006.

The increasing involvement of Hezbollah has changed the balance of power, Saleh admitted, but he said this has led to increased coordination among FSA brigades.

After the Hezbollah’s militias entered, that changed the balance of power a little bit.

There is a lot of coordination that is taking place between FSA brigades. That is the reason we see the operations are taking place in the countryside of Latakia, in Deir Ez Zor, in the different provinces which we are going to release the report to you.

Because of this change, Saleh said that the time was now ripe to establish a “National Syrian Army of at least 100,000 fighters”.

However, Saleh said, the Syrian Coalition needed financial help to achieve this:

That requires a tremendous amount of financial support. This is something that the Syrian Coalition does not have- nor does the Supreme Military Council. So this is something that is a project that we are taking to the different countries that we are visiting. [Coalition head Ahmad Asi] Al Jarba and Secretary General of the Syrian Coalition Dr. Bader Jamous have spoken about with different countries whenever they met delegations from those countries.


Saleh hinted that fundraising was going on via “diplomatic visits” to opposition supporters in other countries:

Saleh contrasted the visits inside Syria of opposition leaders — Coalition head al-Jarba in Daraa Province during Eid celebrations and the tour of General Salem Idriss in northern Lattakia — with Syrian President Bashar Al Assad’s appearance at a Damascus mosque for Eid prayers.

Also in the last couple of days General Salem Idris visited the coastal areas in Syria. These points emphasize the direction that the Syrian Coalition and the Supreme Military Council, is going to be taking over the next few months which focus on tremendously on the inside of Syria.