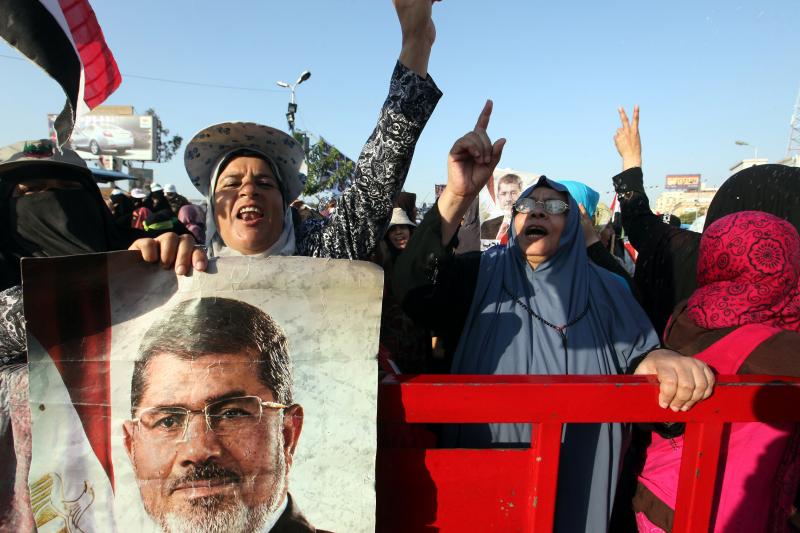 Fridays have become days of mass protests, with the possibility of deadly clashes, since the uprising and coup against President Morsi this summer — and today should be no different.

Last Friday culminated in the late-night killing of at least 80 pro-Morsi demonstrators by police in Cairo, amid clashes on the 6 October Bridge in the capital. Despite the violence, the supporters of the former President have refused to move from their main sit-in at Rabaa El-Adewaya in the Cairo suburb of Nasr City, and opponents of Morsi — as well as backers of the military — have promised to gather again today in Tahrir Square.

Throughout the week, the interim Government has warned that it will order security forces to disperse pro-Morsi gatherings. On Thursday, he Minister of Interior ministry offered “a safe exit” to those who left the rallies.

The people will not leave the squares all over Egypt. We are here for the restoration of legitimacy….We are offering our blood, our money, everything in order to restore [democracy].”

These people will not leave these places. They have only one opportunity to make the people leave — to kill all the millions here.

We have our own demands: The restoration of legitimacy, the return of democracy to our country. Then everything can be discussed.

Egyptian State media report that two policemen have been injured by birdshot in clashes with supporters of former President Morsi at the Media Production City complex outside of Cairo.

Clashes resumed on Friday night after both sides stopped for the Iftar meal breaking the Ramadan fast at sunset.

The confrontation began when police fired tear gas at a pro-Morsi march approaching the media complex. Police said in a statement on Facebook that protesters were blocking traffic.

State media is reorting that “thousands” of supporters of deposed President Morsi have marched.

Crowds set off from 33 mosques across Cairo and Giza under the slogan “Egypt Against the Coup.”

Claimed footage of one of the rallies this afternoon:

Television footage showed the main pro-Morsi sit-in filled Rabaa El-Adewaya Square by early afternoon, despite the sweltering heat. Some of the demonstrators used a hose to sprinkle water on the crowds.

Thousands of Morsi supporters also marched towards Media Production City, the complex outside Cairo where most privately-owned channels are based.

Pro-Morsi marches are also being held in other cities, including Egypt’s second city Alexandria.

A thousands-strong march converged outside the headquarters of Alexandria’s security directorate to protests the Ministry of interior’s statement that it will disperse pro-Morsi sit-ins.

The 600,000-member Tunisian General Labour Union (UGTT) has given the coalition Government one week to from a new technocrat administration, otherwise the union will be “forced to consider” other options.

The UGTT has been trying to mediate between the Government, led by the Islamist party Ennahda party and secular factions who are demanding the removal of the Government and dissolution of a transitional Constituent Assembly that is only weeks away from completing a draft Constitution.

The UGTT hzx offered a compromise that would put a new technocrat government in place but preserve the Assembly. while speeding up the time scale for completing the constitution and new election laws.

“[We] will continue to hold talks and if our demands of changing the government and implementing a time frame for the Constituent Assembly, then we will have other options that we will be forced to consider,” the UGTT’s deputy leader, Bou Ali Mbarki, said.

Both the Government and the opposition have called for rival “million-man” marches over the weekend.

The measures follow the call of the Bahraini Parliament earlier this week for sweeping action to crack down on “terror”, amid continuing protest for reform and justice in the Kingdom.

The journalist, Can Dündar, who has been critical of the government’s response to the Gezi Park protests, has been dismissed from his job at the daily Milliyet bringing the total of journalists to have been dismissed or resigned to 59.

Responding to his dismissal, Dündar wrote on his blog, “I was waiting it for a long time, it wasn’t a surprise … I’m not the first, and I won’t be the last.”

A rocket-propelled grenade was fired at the Sinai Sun hotel in the North Sinai town of Al-Arish last night.

Although the incident caused no casualties, a policeman was shot dead in a similar attack on the same hotel earlier in the day. The hotel appears to be targeted because most of its guests are said to be security personnel.

More than 1000 people were killed in Iraq in July, the United Nations has reported, the highest monthly death toll in five years.

Violence and deaths have risen since April, amid mainly-Sunni protests against the al-Maliki Government. Suppression of protests in late 2012, following attacks by security forces on Sunni officials and Ministers — and a deadly crackdown on a Sunni protest camp in the northern town of Hawija have fueled the conflict.

US Secretary of State John Kerry, in comments to a Pakistani news agency on Thursday, effectively endorsed the July 3 coup in Egypt: “In effect, [the armed forces] were restoring democracy. The military did not take over, to the best of our judgment — so far, so far — to run the country. There’s a civilian government.”

Kerry insisted, “The military was asked to intervene by millions and millions of people, all of whom were afraid of a descent into chaos.”

The US Government, protecting more than $1.3 billion in annual military aid to Cairo, has refrained from calling last month’s events a “coup”, overthrowing President Mohamed Morsi.

The Bahrain Center for Human Rights reports that a second journalist was arrested on Wednesday night.

Hussain Hubail was taken from Bahrain International Airport while on his way to Dubai.

We reported on Thursday that prominent blogger and media fixer Mohammed Hassan, a friend of Hubail’s, was seized in a dawn raid on his home.

The charges against the two men are unknown.