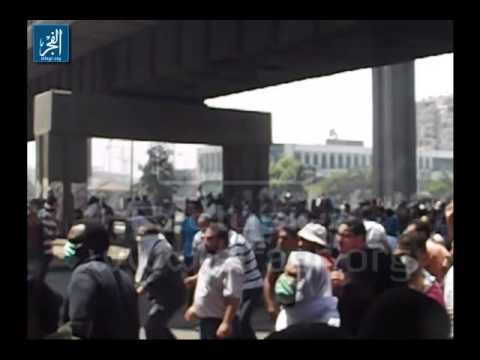 LATEST: Egypt Video — Man Shot As He Tries To Rescue 1 of Wounded in Wednesday’s Attack by Security Forces

For the third time since the military coup of July 3, scores of people — the vast majority of them supporters of deposed President Mohamed Morsi — were killed in a day of violence in Cairo and across the country.

Officially, the death toll is 327 with 3,926 injured — a far greater number than even the mass killings of last month — but the body count may be even higher after security forces broke up pro-Morsi sit-ins in Cairo and shot at protesters outside the gatherings, and Morsi supporters responded with attacks on police and, in seven cases, churches outside the capital.

The sit-in at Rabaa El-Adewaya Square after the attack by security forces:

Rather than expressing concern over the unprecedented level of deaths, the interim Government praised the Interior Ministry for acting with the “highest level of restraint”. It blamed the protesters for the events, emphasizing the claim that 43 police officers were killed.

On Wednesday night, interim Prime Minister Hazem El-Beblawi tried to drive home the message that the dispersal of the pro-Morsi sit-ins, established just before the coup, was justified: “This state of mayhem had to end.” An economist, El-Beblawi emphasized the need for stability after the turmoil of Wednesday and recent months:

The strategy of the interim Government and military is now to get that “security” through a month-long curfew in 14 Governorates, including Cairo, and a general State of Emergency.

El-Beblawi gave the closest statement to an apology that the Government would offer on the day: “There is no respectable country in the world that would declare a state of emergency except when absolutely necessary.”

Egypt Video: Man Shot As He Tries To Rescue 1 of Wounded in Wednesday’s Attack by Security Forces

A scene from Wednesday’s mass killing in Egypt, as a man in Rabaa El-Adewaya Square in Cairo is shot as he tried to rescue a wounded protester:

Lebanon: At Least 17 Killed in Car Bomb in Southern Beirut

At least 20 people have been killed and more than 100 wounded by a car bomb in a southern suburb of Beirut on Thursday.

Photo from the explosion scene in Dahyi, Beirut (not mine). This looks like someone was targeted. #Lebanon pic.twitter.com/tk01MbIeBP

Caretaker Interior Minister Marwan Charbel confirmed that the blast was from an exploding car.

TV footage showed scores of residents screaming while trying to flee the carnage, with dozens of cars in flames and other extensive damage in the area.

A Sunni Islamist group calling itself the Brigades of Aisha has claimed responsibility: “This is the second time that we decide the place of the battle and its timing…And you will see more, God willing.”

More than 50 people were wounded on July 9 from a car bomb ripped in southern Beirut’s Bir al-Abed neighborhood, an area which also has a significant Hezbollah presence.

Interior Ministry Authorizes “All Forces to Use Live Ammunition”

The Interior Ministry has put out a brief statement that it has “instructed all forces to use live ammunition to counter any attacks on government buildings or forces”.

An Egyptian soldier stands in the Rabaa El-Adewaya Mosque, ruined when security forces violently cleared the pro-Morsi sit-in in the nearby square on Wednesday:

Army in control in ruins of Rabaa mosque in #Cairo. pic.twitter.com/g7t65hRKQ1

U.S. President Obama said Thursday that the U.S. will cancel the joint military exercise with Egypt, scheduled for September.

U.S President Barack Obama is to interrupt his summer vacation on Thursday to make his first statement on the violence in Egypt that has left more than 500 people dead.

AP points out that while the U.S. continues to refrain from calling the military ouster of former President Mohamed Morsi a “coup”, officials are “considering scrapping” the annual joint US-Egypt Bright Star military exercises scheduled for September.

And here is a picture of Rabba Square on Thursday:

Egypt: Relatives of Dead Complain They Are Not Allowed To Take Bodies

Relatives complaining not allowed to take bodies. "It is to humiliate us, to leave them lying there like dogs"

Activists in Egypt have compiled a list of churches and Christian institutions attacked during Wednesday’s violence. The activists say the list is a work in progress.

Among the churches listed are the Amir Tadros Church in Minya, where about 12 churches were attacked: 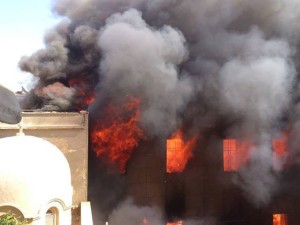 Egypt Independent reports that the Muslim Brotherhood plan to hold a new sit-in near the al-Eman mosque in Nasr City.

In a statement on Thursday, the Brotherhood said that it plans to hold a march in Cairo.

“Marches will launch this afternoon from Al-Eman mosque to protest the deaths,” the Islamist group said in a statement.

On Wednesday, supporters of toppled President Mohamed Morsy gathered before al-Eman mosque in Nasr City to stage another sit-in to replace the one at Rabaa al-Adaweya Square, dispersed by security forces on Wednesday

Brent oil prices rose on Thursday to above $111 per barrel — a four-month high — amid fears that the violence in Egypt could affect the Suez Canal.

“Disruptions at the Suez Canal are unlikely, but markets never move on what’s likely. They move on fear. If people are fearful about supply, they buy even if the market is fundamentally well supplied…I think Brent has the potential to go as high as $113 to $114 but not much higher.”

Egypt 1st-Hand: The Scene on Wednesday “Sprinting Through Live Fire to Check on Wounded and Dead”

An extract from the account of journalist Bel Trew, who was amid the fighting in Cairo on Wednesday:

The field hospital next to the [Rabaa El-Adewaya] mosque was surrounded by clashes. Protesters on the southern side of the sit-in took turns sprinting through a corridor of live fire to access the building in order to check on the wounded and the dead.

Hours into the onslaught, hundreds of protesters still held their ground, resisting the security forces with rocks and Molotov cocktails thrown over the makeshift barricades of pavement stones. Meanwhile, women and children remained huddled behind sandbags and concrete walls in a southern corner of the Nasr City sit-in. The gunfire, coming from all directions, was bewildering. Bullets rained down from above and zipped past at street level — protesters claimed they had seen snipers shooting down on the encampment from the overlooking buildings. Black columns of smoke mingled with the impenetrable plumes of tear gas, making it difficult to breathe.

The Health Ministry has updated the death toll from yesterday’s fighting in Cairo and across Egypt to 464, with 3,572 wounded.

Denmark said Thursday that it has frozen around $5.3 million in development aid to Egypt, in response to Wednesday’s government crackdown on pro-Morsi protests that left at least 400 civilians and 43 police officers dead and many more injured.

“Denmark has two projects in direct collaboration with the Egyptian government and public institutions, and they are now going to be suspended…It is in response to the bloody events and the very regrettable turn the development of democracy has taken” in Egypt,” Christian Friis Bach, the development aid minister told the Berlingske newspaper.

Iraq: At Least 14 Killed in 5 Car Bombs in Baghdad

At least 14 people have been killed and 12 wounded in five car bombs across Baghdad on Thursday, with one attack close to the capital’s “Green Zone” diplomatic complex.