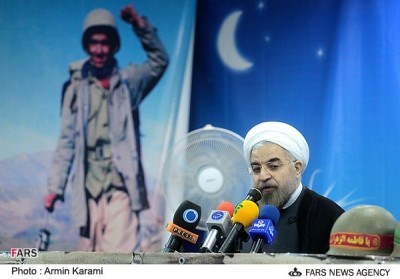 Parliament’s votes on each of the 18 Ministers proposed by President Rouhani did not come on Wednesday, as discussion of the nominees and their presentations overran.

The votes are now expected on Thursday after the final proposed Ministers make their cases for confirmation.

Most of Rouhani’s choices appear to be safe. For example, proposed Defense Minister Hossein Dehghan faced no opposition at all after his statement in the Majlis.

However, four of the nominees could be blocked, with “hard-line” MPs criticising their service in the reformist Khatami Government up to 2005 or their links to “sedition” — the protests after the disputed 2009 Presidential elections — because of their ties to candidates Mir Hossein Mousavi and Mehdi Karroubi, both of whom have been detained since February 2011.

Zanganeh was Oil Minister from 1997 to 2005 and is seen as an effective manager and welcome choice for links with foreign investors, almost all of whom have left Iran’s energy projects since 2010. However, his critics focus on his work with Mousavi in the 2009 election to claim he is not reliable. He may also be opposed behind the scenes by the Revolutionary Guards, who have a major stake in Iran’s energy sector and whose long-time commander, Rustam Qassemi, was the last Oil Minister.

The Vote on Rouhani’s Ministers

Parliament has approved 15 of 18 proposed Minister for President Rouhani’s Cabinet.

Those rejected include Mohammad Ali Najafi (Education), who was connected with the 2009 Presidential campaign of detained opposition leader Mehdi Karroubi; Ja’far Meili Monfared (Science and Higher Education), whose lack of experience was seen as a problem; and Masoud Soltanifar (Sports and Youth).

Situation in #Egypt is devastating. Our prayers go out to victims & their families. Egyptian elite & intellectuals should help restore peace

Bahonar: “Vote On Cabinet Should Conclude Thursday, Even If Parliament Has To Convene Late-Night Session”

The Deputy Speaker of Parliament, Mohammad Reza Bahonar, said Thursday morning that Parliament will remain in session until all the debates on President Rouhani’s Cabinet nominees have ended and MPs have cast their votes, but added that if MPs cannot finish voting on Thursday night, Parliament will have to continue on Saturday.

Bahonar told the Parliamentary news agency, ICANA, that if MPs have not finished debating the nominees by the close of parliament’s second session — extended until 8 pm local time (15:30 GMT) — parliament will “run through a third shift so that the results of the voting are announced”.

In the event that MPs cannot wrap up voting by the end of Thursday, Bahonar said they will have to continue on Saturday, a move that is in accordance with Parliamentary bylaws.

“We are trying to conclude the proceedings today,” Bahonar stressed.

Kayhan Barzegar: With Rouhani Election, U.S. Has Window Of Opportunity To Initiate Negotiations

Mehr News on Thursday publishes excerpts from an article by Kayhan Barzegar, the director of the Institute for Middle East Strategic Studies in Tehran, who says that Washington should take advantage of the fact that Iran has a “pragmatic, experienced president with a clear mandate to initiate direct talks with the United States”. There is now a window of opportunity in Iran to initiate negotiations, he argues — a window that would be closed if the U.S. imposes further sanctions on Tehran.

Now that Iran has a pragmatic, experienced president with a clear mandate to initiate direct talks with the United States, the Barack Obama administration should take advantage of this situation and seize the “sanctions and diplomacy” approach for a moment, thus laying the groundwork for the success of the nuclear negotiations in an incremental manner. Further political and economic pressure on Iran will surely reverse the current positive atmosphere in Iran in favor of the political forces against restoring relations with the United States.

Press TV reports that Thursday’s parliamentary session kicked off with a speech by Industry, Mines and Trade Ministry nominee, Mohammad-Reza Ne’matzadeh, who responded to the criticism put forward against him on Wednesday.