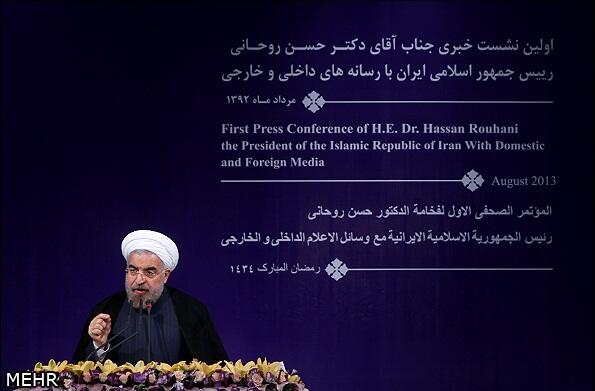 Western attention to President Rouhani’s first news conference will be on his message about nuclear talks, particularly with the US — we offer an analysis, “Rouhani to Obama — ‘Get Serious About Nuclear Talks’”.

However, the new President’s initial emphasis on Tuesday was on Iran’s economic situation. He declared that “a plan has been prepared for four years”, and no time will be lost in implementing it: “Tomorrow we will talk on subsidies”, a reference to former President Ahmadinejad’s troubled flagship program of subsidy cuts.

That emphasis on the economy is unsuprising, given Rouhani’s approach of declaring Iran’s pressing problems — he said last month that inflation was now at 42%, and repeated yesterday that rising prices and unemployment were the legacy of the Ahmadinejad Government.

What was just as interesting, and perhaps unexpected, was a brief and telling exchange over political prisoners.

A reporter for the reformist newspaper Shargh asked the President what he would do to fulfil campaign promises about freeing political prisoners, including the detained opposition leaders Mir Hossein Mousavi and Mehdi Karroubi.

Rouhani’s reply was cautious, to say the least: “I keep track of the issue of political prisoners in cooperation with legislative and Judiciary powers.”

In recent weeks, EA has noticed a not-so-subtle change in the Supreme Leader’s use of his Twitter account, specifically in English. Whoever is responsible for Ayatollah Khamenei’s English-language tweets is embarking on frequent, semi-coherent rants. The latest of these, from Tuesday, concerns the Supreme Leader’s comments on meeting a group of Iranian scientists.

Khamenei seems to be praising Iran’s progress in science and suggesting that Iranian scientists write in Persian, a language eminently suitable for scientific academic papers.

Leader of #Revolution at meeting w/professors:According to reports&western sources,#Iran's #scientific growth been multiplied by 16 in 12yrs

Shud we sit and breathe in relief in face these achvmnts? No! We are still so much backward regarding front line of the needed #knowledge

Do ur scientific works in a way that Westerners learn #Farsi 2 read ur articles.Farsi has such capacity that can Xpress most subtle sciences

Here, Khamenei appears to be praising Iranian methods for science, or perhaps saying that Westerners are poor at translation:

Now the Supreme Leader jumps to a comment on a particular tome about colonization:

Before studying "Glimpses of World History" by Mr. #Nehru I didn't know #India before colonization had undergone so many important #advances

He leaves us with this cryptic note: