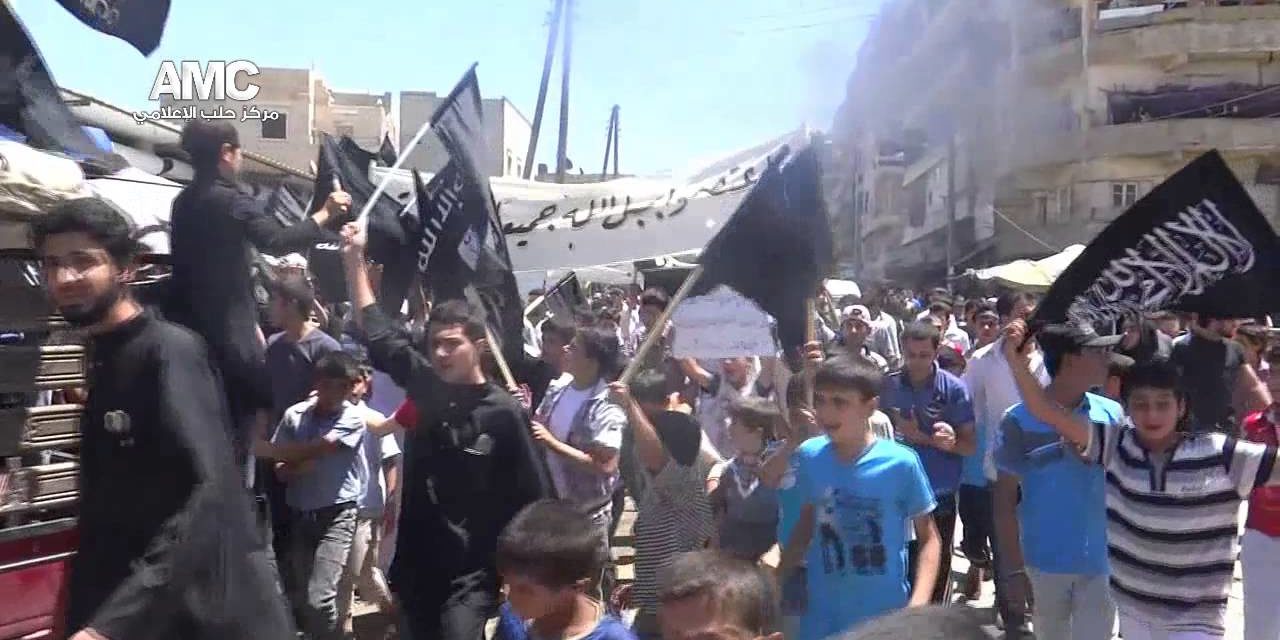 The weekly Friday protests against the Assad regime — continuing after 28 months despite the conflict’s descent into civil war — were notable for their size and location. Video showed impressive turnouts in insurgent-held cities like Raqqa, in Damascus suburbs, and in sections of Aleppo, which has been locked in military stalemate since July 2012.

The footage also pointed to support for Islamist groups, as in the presence of the Jabhat al Nusra flag in a rally in the Tariq al-Bab district of Aleppo:

The Islamic State of Iraq flag at a demonstration in Azaz, 20 miles northwest of Aleppo and near the Turkish border:

In an entry on a Facebook page, the Islamic State of Iraq appears to condemn “apostates of the Free [Syrian] Army” for clashes in al-Dana, a town near the Turkish border.

The entry follows reports of fighting in which, according to an opposition group “Free Youths of Idlib”, dozens of participants were killed, wounded, or imprisoned.

Syrian troops seized several buildings on the edges of insurgent-held districts of Homs, a local activist said on Saturday.

“The most heated battles are taking place on the Khaldiyeh and Bab Hud fronts,” the activist, named only as Yazan, told AFP. “Starting Friday, regime troops started to advance slowly, seizing several buildings on the edges of Khaldiyeh district.”

The activist also reported “the collapse of several buildings” because of the shelling, adding that an unknown number of civilians were trapped under the rubble.

The Syrian National Coalition said in a statement Saturday evening calling on the international community to act, and accusing Assad of deploying chemical weapons against insurgents and civilians in Homs. The Coalition said:

Over the past several hours, there has been violent bombardment with heavy artillery on Homs. We ask the international community to respond to these atrocities and exercise its full capabilities to protect the Syrian people from the Assad regime’s criminal acts.

Yesterday, Assad, with the support of Hezbollah militia, launched hundreds of rockets and continues with a campaign of severe mortar shelling. Videos released by activists show the regime shelling of the Al Khalidiyah neighborhood using new types of missiles, chemical weapons, and incendiary elements.


The Coalition also provide links to several videos of the bombardment, including footage they claim could show evidence that regime forces used chemical weapons. Warning: Some of the footage is graphic.

” target=”_blank”>Khalidiya neighborhood in Homs is suffocating due to heavy shelling and gasses, Warning: video difficult to watch, July 5, 2013


” target=”_blank”>Field hospital overcrowded with injured people as a result of the bombing of toxic gases in the Khalidiya neighborhood of Homs, July 5, 2013


” target=”_blank”>The regime set forests and horticulture on fire in the neighborhood of Al Waer in Homs, July 5, 2013:

Ahmad Jarba has been elected President of the opposition Syrian National Coalition in a run-off ballot, defeating Mustafa al-Sabbagh.

Jarba, from Hasakah Province in eastern Syria, was seen as the favourite of Saudi Arabia, while businessman al-Sabbagh was backed by Qatar.

The Syrian National Coalition provide a biography of Jarba:

He was born in 1969, in the city of Qamishli in Syria and was educated in the public school system. He holds a law degree from the University of Beirut.

Because of his anti-regime stance, Jarba was arrested, detained and questioned in the beginning of the revolution, in March 2011, by Syria’s notorious Intelligence agents.


The Coalition also give names of those elected to other posts:

Video: Insurgents From The Badr Martyrs Brigade In Ashrafiyeh, Aleppo, Use Artillery Cannon

A series of videos posted by activists on Saturday show insurgents fro the Badr Martyrs Brigade in Ashrafiyeh, northern Aleppo, using an artillery cannon to fire on Assad’s forces in the city.

In this video, a brigade commander talks about the gun:

This video shows insurgents preparing the gun to be fired:

Painted on the side of the gun are the words مدقح الفاتح, meaning Al-Fatah [‘Victory’] Cannon’ — the term “fateh” has an Islamic religious and military connotation, because it refers to the Sura Fateh in the Quran, in which is considered a conquest in the struggle between Mohammad and the first Muslims and the Quraysh in Mecca, when Allah tells the Prophet he will grant him a “manifest victory”.

Russia has opposed a UN Security Council Statement proposed by Luxembourg and Australia, which expressed concern over the situation in Homs, calling it “unbalanced”, ITAR-TASS reports on Saturday.

ITAR-TASS said that while Australia and Luxembourg had referred to “about 2,500 citizens” being trapped in Homs, Russia wanted to revise the text to refer to events in the Shia towns of Al Nobul and Al Zahra. Moscow says that citizens in those towns “have been under siege for eight months by Jabhat Al Nusra”.

Russia’s permanent mission to the UN was quoted by ITAR-TASS as saying that:

“We regret that our actual suggestions on the draft press statement proposed by Australia and Luxembourg have been completely ignored. Moreover, the text circulated yesterday as become even more unbalanced. It is based on a double-standard, and it has little to do with humanitarian issues.”

The opposition Syrian National Coalition will hold a run-off ballot later today to elect a new leader, after the initial vote failed to deliver a majority for any candidate.

Ahmad Jarba, a tribal figure linked with Saudi Arabia, and Mustafa al-Sabbagh, a businessman supported by Qatar, will contest the run-off among the 115 member Coalition.

The Coalition has been without an elected leader since cleric Moaz al-Khatib quit in February amid internal divisions.

Video: The Regime’s Bombardment in Homs

Amid the sustained bombardment of sections of Homs by regime forces, burning buildings in the Ghanto section on Friday night:

The Local Coordination Committees report that 73 people were killed on Friday, including 18 in Aleppo Province and 17 in Damascus and its suburbs.

The Violations Documentation Center reports that 65,552 people have been slain since the start of the conflict in March 2011, an increase of 74 since Friday. Of these, 50,148 were civilians, a rise of 45 from yesterday.