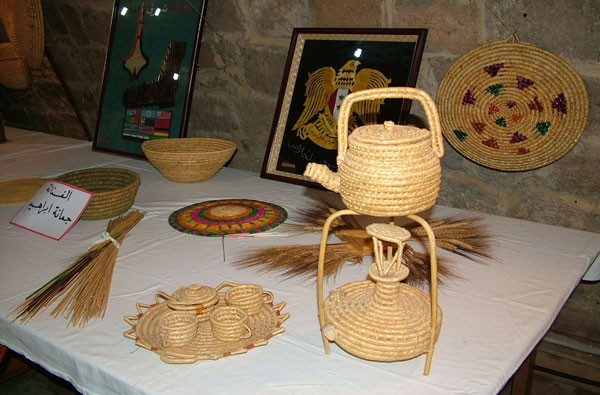 PHOTO: Syria Say These Teapots Show Revival Of Tourism: But Could They Be Cover For Iranian Military?

Despite the Syrian regime’s continued bombardment of Homs and amid intense clashes in other cities, Bashar al-Assad’s government still found cause to express joie de vivre on Saturday, with an on-the-ground report from the well-known Tartous Summer Festival.

The huge turnout at the Tartous Summer Festival — photographs show as many as 40 people crowded around one particular display of traditional hand-embroidered floral wall hangings — was evidence of “national unity among the Syrians, al-Nasser said. 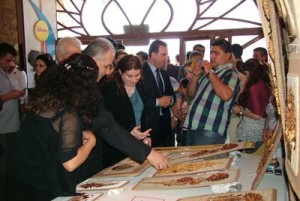 However, images of the festival reveal something more sinister than just a flourishing of the Syrian tourist industry.

Robert Fisk reported last month, after “Iranians” visited his Beirut apartment, that Iran’a Republican Guards was sending up to 4000 fighters in southern Syria. PhilLip Smyth, “Research Fellow at a think tank”, has proclaimed an Iran-Iraqi Shia-Hezbollah-Syria military force<, a claim endorsed by the Washington Institute for Near East Policy — all on the basis that the bodies of several slain fighters passed through the Islamic Republic on their way to burial in Iraq and that three Iranian personnel were killed in or near Damascus this spring.

Could this be the smoking gun, or rather attractive teapot, which proves their assertions?

Two pictures published by Syrian media show Persian carpets on display — a clear indication that the Republican Guards’ elite Qods Force is present in Tartous and possibly controlling the Festival.

In the image below, a shadowy, sinister figure — likely a senior Qods Force officer — is captured lurking behind a loom. 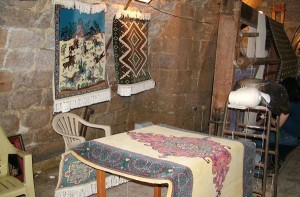 Two additional tell-tale quotes from al-Nasser and State media give away the Axis of Teapots:

1. The Tourism Minister said Damascus was “determined to press ahead with reconstruction process” — a term used by Iran for undercover Qods Force operations; and

2. SANA writes, “Al-Nasser and Tartous governorate honored the families of six martyrs and 31 wounded, in addition to 5 of the top students in the province.”. Using Smythian logic, it is likely that members of Iran’s Qods Force and Hezbollah were among the “six martyrs”.

We continue our quest for truth: are there any photographs revealing the Hidden Imam at the Festival? Were any of the attendees given Sundis as a reward for attending? Did those traditional Syrian hand-woven teapots contain explosives or Shia texts?

Check back for updates….

Editor’s Note: Phillip Smyth complains on Twitter that we “neglected to find his actual job title”.

We used the biography that Smyth gives on his own Twitter biography. However, here is a fuller description of his resume, from March 2013:

“Phillip Smyth is a researcher specializing in Lebanon, Syria, and the broader Middle Eastern affairs. He travels regularly to the region and has been published by a number of publications.”

Alternatively, he describes himself (May 2013) as:

“[A] researcher who focuses on Hezbollah for the University of Maryland’s Institute for Advanced Computer Studies’ Lab for Computational Cultural Dynamics”.

We are pleased to set the record straight.