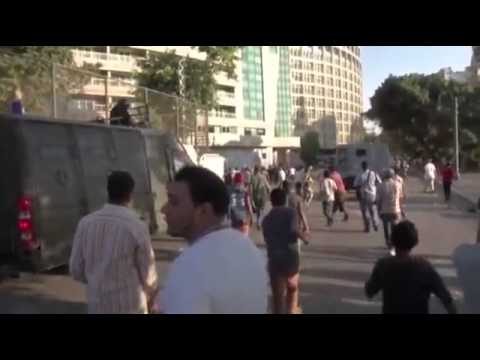 The director of police in Alexandria has said that more than 80 people were detained after clashes on Friday between supporters and opponents of former President Morsi.

The fighting killed nine people and injured more than 100.

According to a local human rights group, many of those were among the people trapped in a mosque overnight.

The detainees are being held over accusations of committing violations against private and public property.

Egypt: ElBaradei, Sheikh of Al-Azhar Condemn “Excessive Use of Force”

Vice President Mohamed ElBaradei has written on Twitter, “I strongly condemn the excessive use of force [by police against supporters of former President Morsi] and the deaths, and I am working hard and in every direction to end the confrontation in a peaceful way, God protect Egypt and have mercy on the victims.”

The Sheikh of Al-Azhar, Sunni Islam’s top authority, also condemned the deaths of scores of people.

“The sheikh of Al-Azhar deplores and condemns the deaths of a number of martyrs who were victims of today’s events,” Ahmed al-Tayyeb — who, like ElBaradei — supported the July 3 coup — said in a statement.

The Grand Imam called for an “urgent judicial investigation” and punishment of those responsible “regardless of their affiliation.”

Journalists reported that police opened fire, killing scores of demonstrators, after the Morsi supporters tried to extend barricades onto the bridge, a vital thoroughfare in the capital.

Egyptian Interior Minister, Mohamed Ibrahim, said Saturday that a preacher affiliated with the Muslim Brotherhood asked pro-Morsi demonstrators to move from their tent protest outside Raba’a Al Adiwiya Square to block the Sixth of October Bridge. Ibrahim said that the police had acted after the protesters blocked the bridge.

“We were surprised when Safwat Al Hegazy asked protesters at the Raba’a stage to head to the 6th October bridge in order to occupy it. He has been in Raba’a for about 29 days, nobody has approached or bothered him. But, the fact that he issued this call to gain ground is unacceptable,” the Wall Street Journal quoted Ibrahim as saying.

On Thursday, Egyptian TV reported that Hegazy had warned of a mass protest on Saturday that would “shake the country” and result in Morsi being reinstated.

Demonstrators have raided buildings in Benghazi and Tripoli as they protested the assassination of leading politician and activist Abdulsalam Musmari.

The crowd burned offices of the Muslim Brotherhood and its Justice and Construction Party in Benghazi, where Musmari was killed, shouting, “Gather your belongings. Benghazi wants you out.”

In Tripoli, a crowd gathered in the central Martyrs Square “in solidarity with Benghazi”. A group of youths then descended on the offices of the JCP, smashing its windows as well as taking out documents and throwing them in the streets.

They also ransacked the headquarters of the liberal National Forces Alliance (NFA), the biggest party in the legislature.

Mohammed Brahmi, the leading leftist politician who was killed by gunmen on Thursday night, has been buried.

The body of #brahmi arrive to the cemetery among chants and applause #tunisia pic.twitter.com/AEz4XUd0UL

Egypt: Ministry of Interior Blames Protesters for 21 Dead in Cairo

The Ministry of Interior and police have held a press conference to blame protesters for the overnight violence in Cairo, in which they claim 21 people were killed and and 14 police were injured, two critically:

Minister of Interior speaking live: "We are from the people; every ounce of blood that drops is precious to us all." #Egypt

MOI: "Minister of housing called me… to warn that 6 oct bridge cld collapse if over occupied. Our forces were then directed to the bridge"

The Ministry of Interior repeated its earlier statement that the pro-Morsi sit-in at Rabaa El-Adewaya will be cleared “in a lawful manner”.

Man weeps by body of deceased in rabaa pic.twitter.com/Gj55S4VUAF

Amid sharply varying claims of the casualties from police fire on supporters of former President Morsi, journalist Samer al-Atrush gives what may be the best estimate:

I saw 37 bodies, all shot, in the Rabaa field hospital. Essam Sultan, head of emergency services, says 29 other bodies in various hospitals

Alex Ortiz of US CBS News:

Medical volunteers stand over the bodies of the dead. The floor is slick with blood. pic.twitter.com/uQPgkGeoZw

Egypt: Minister of Interior “Pro-Morsi Sit-In To Be Ended In Framework of Law”

Hours after police killed scores of supporters of former President Morsi, Minister of Interior Mohammed Ibrahim has said of the pro-Morsi sit-in at the Rabaa El-Adewaya Mosque, “There will be decisions from the prosecutor soon, and this situation will be ended…in the framework of the law.”

Journalist Sharif Kouddous reports from the field hospital among the bodies of at least 24 supporters of former President Morsi killed by police overnight:

Inside makeshift morgue crowd is chanting "Sisi you murderer" and "the people demand the execution of the killer" pic.twitter.com/UqXgvZmXxf

Waiting for more bodies to emerge. Poster of Morsi on the wall outside. pic.twitter.com/pBjHGoeMtV

Patrick Kingsley of The Guardian:

Wailing young man at Rabaa who lost his brother during the attacks pic.twitter.com/PN296eNQxH

AP on Friday cite unnamed Egyptian military officials as saying that, for the past three weeks, military intelligence agents have extensively questioned ousted President Mohamed Morsi about the Muslim Brotherhood and his Presidency. The aim of the interrogations was prove Morsi “committed crimes including handing state secrets to the Brotherhood”, AP report.

Military intelligence has had sole access to [Morsi] and has questioned him at least once a day, sometimes for up to five hours, the officials said. At times they have presented him voice recordings of his conversations to question him on them, they said.


The ousted President has been denied access to newspapers and television and has been moved between various Defense Ministry facilities, according to the report.

Morsi supporters building up more defences at the frontlines. Around 500 of them here. pic.twitter.com/FO0z6KHwwc

Activist Mosha’ab Elshamy reported via Twitter that he had counted 24 bodies in a makeshift field hospital close to the protests at the Rabaa al-Adawiya mosque.

Counted 24 bodies, all shot in head or chest, at Rabaa's makeshift morgue. More being carried in. No words. pic.twitter.com/vF35Hui5vp

Al-Ahram is still reporting that “over ten” pro-Morsi supporters have been killed.

Kareem Fahim, the New York Times Middle East correspondent, took this image (warning — graphic) of bodies being brought into the field hospital. Fahim says there are at least 25 bodies there.

Tunisia: Man Killed in Protests Over Assassination of Opposition Figure

One man was killed on Saturday in protests in the southern Tunisian city of Gafsa, following Thursday’s assassination of Mohammed Brahmi.

The news came after six opposition parties announced they were withdrawing from the National Assembly over the assassination and called for the Government to step aside for a national unity administration.

Another video, purportedly by “media mujihideen” affiliated with the Islamic State of Iraq and As-Sham, discussing the attacks on the Abu Ghraib and Taji prisons in Iraq earlier this week, for which it claimed responsibility. The attacks and freeing of Sunni prisoners has been hailed by ISIS as the fulfillment of a promise by the group’s Emir, Abu Bakr al Baghdadi.

Egypt Video: Report from Pro-Morsi Sit-In After 38 Killed by Police in Cairo

As officials raise the death toll to 38 from overnight police clashes with supporters of former President Morsi in Cairo, Al Jazeera reports from the main pro-Morsi demonstration in Nasr City:

On Thursday, Mohammed Brahmi, a leader of a leftist political movement, was killed by gunmen. Earlier this year, the assassination of Chokri Belaid, from the same party, brought mass protests that challenged the Government.

The opposition parties said Friday that the coalition government, led by the Islamist Ennahda Party and two secular factions, should be replaced by a temporary national unity government.

On Friday, Minister of Interior Lotfi Ben Jeddou told a news conference that the same 9mm semi-automatic pistol, was used in the killings of Belaid and Brahmi.

The Minister claimed Boubakr Hakim, a 30-year-old weapons smuggler, had killed Brahmi and was part of an extremist cell that assassinated Belaid in February.

Flights and public transportation were cancelled amid protests on Friday, with several groups and political parties saying demonstrations would be held until the government resigns.

Protests have staged a demonstration in the Libyan capital Tripoli, followed the latest political assassination in the second city of Benghazi.

On Friday, Abdulsalam Musmari, a lawyer and political activist who was one the founders of the 17 February Coalition that challenged the Qaddafi regime, was killed as he walked home from a mosque.

An Egyptian doctor at a field hospital says at least 23 supporters of ousted President Mohammed Morsi have been killed near a Cairo demonstration in overnight clashes with security forces.

Medics say more than 700 people have been wounded.

Police fired tear gas to disperse hundreds of Morsi supporters near their main sit-in in front of Rabaa El-Adewaya Square, setting off clashes that lasted for hours.

Most reporting says Morsi's supporters tried to extend Rabaa sit in w/ a roadblock ~1km away and were met w/ targeted live fire.

@liamstack @simonjhanna as far as I can tell protesters attempted to extend sit-in security forces said no.

Clashes on Friday afternoon in Cairo:

The confrontation came at the end of a largely-peaceful day when hundreds of thousands marched both for and against Morsi, overthrown by the military on July 3. As the President’s supporters marched towards Rabaa El-Adewaya, his opponents again filled Cairo’s Tahrir Square.

Opposing demonstrations also took place in cities throughout Egypt. In the deadliest incident before the overnight clashes, nine people were killed and more than 100 injured in Alexandria when pro-Morsi and anti-Morsi crowds fought.

Morsi’s opponents had been called to the streets by the head of armed forces, Abdel Fattah El-Sissi, who said on Wednesday that he wanted the Egyptian people to show their support for the military’s stand “against terrorism and violence”. The former President’s backers stood firm, however, denouncing the coup and insisting that they will not leave main squares.

In a further escalation on Friday, the regime formally arrested Morsi, detaining him for 15 days on charges that he collaborated with the Palestinian group Hamas. Specifically, authorities claimed the former President — detained at the start of the 2011 Revolution against the Mubarak regime — was involved in a mass escape of prisoners and the killing and kidnapping of police officers.

Shortly before the Cairo fighting, interim President Adli Mansour had finally made a statement about this week’s events, “I call on protesters in Al-Nahda Square and at Rabaa El-Adewaya Mosque to go back home and I promise you will not be harmed.”