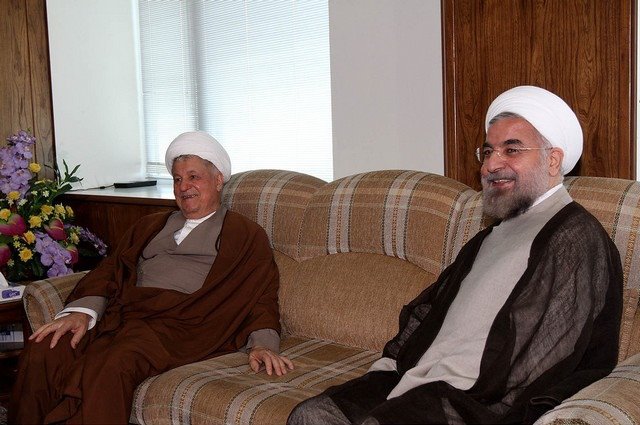 Observers, still trying to make sense of the surprise victory by Hassan Rouhani in June’s Presidential election, are contriving more and more complex explanations of a master plan by the Supreme Leader. The Guardian featured an attempt on Thursday, “In allowing radicals to lose the presidential elections, the supreme leader liberated himself from much of their influence.”

Meanwhile, the man who did win the election — Hassan Rouhani — and his mentor, Former President Hashemi Rafsanjani, are making their moves to capitalise on the political space opened up by the result.

Earlier this week, Rouhani combined an interview with a weekly youth magazine and a social media campaign to test the possibility of expanding social and media freedoms, as well as criticizing State broadcaster IRIB and calling for a new approach towards the Syrian conflict.

Now Rouhani and Rafsanjani, using their meeting and the 25th anniversary of the downing of an Iranian civilian plane by the US, have launched a bold attempt — implicitly challenging the Supreme Leader — for “engagement” with the US.

Former President Hashemi Rafsanjani used his Twitter account on Friday to say that the Iranian people participated vigilantly in the “epic” June 14 election and chose their preferred candidate, despite foreign propaganda.

Rafsanjani went on to say that the US should not use sanctions and its role in the UN as an excuse to pressurize Iran.

Iran was on the verge of huge social and political accomplishments, the former President said, that required massive public support.

Meanwhile, the authorities are obliged to prepare the way for the aspirations of the people to be realized, Rafsanjani said:

Sayyed Ahmed Khatami, the leader of Friday Prayers in Tehran, chided ousted Egyptian President Mohamed Morsi during his Friday sermon for taking a negative attitude to Iran and to Shia Islam in general.

Khatami said that Egypt was the origin of the Islamic Awakening and that a year ago the Muslim people of Egypt had gone out to the polls and voted for a constitution and Islamic representatives.

However, Khatami said, the very people who had formed the government had themselves laid the groundwork for the coup.

How did this come about? Khatami explains: instead of joining the unity of the Islamic world against the Takfiris, they remained silent. They shouted slogans against the “Zionist regime” — Iran’s term for Israel — but after they came to power they extended the Camp David peace agreement, he said — even sending a letter to Israeli President Shimon Peres and sending an ambassador to Israel.

Khatami continued:Morsi took a negative attitude towards Iran and Shia Islam. Moreover, the then-Egyptian President met with US President Obama — which caused Egyptians to take to the streets.

“We want the Egyptian people to be the guardians of the Islamic Awakening,” he added. “Instead of becoming Israel’s backyard, like an unblessed country.”