While news outlets speculate on how the Supreme Leader might have somehow managed to win June’s Presidential election, the man who got the majority — Hassan Rouhani — is manoeuvring with declarations and signals about domestic and foreign policy.

Perhaps more importantly, so is another man, who once held the Presidency but was disqualified from competing in June: Hashemi Rafsanjani

On Thursday, Rouhani tweeted a message with a link to a photograph, taken this week, of himself with his mentor:

“Headline of the week: Hashemi Rafsanjani: Dr Rouhani’s discourse of moderation and the policy of prudence and wisdom promise a new season for the country’s administration.”

Meanwhile, Rafsanjani took advantage of a more somber anniversary — the shooting-down of Iran Air Flight 655 on July 3, 1988 by an American warship — to back a policy 25 years later: increased engagement towards Washington.

On his personal site, Rafsanjani revisited his comments following the 1988 incident, when he was both Speaker of Parliament and Iran’s military commander. Rafsanjani recalls that, although he was urged by some in the regime to call for revenge, he insisted he would not do so. He notes that he specifically opposed calls by the Imam — then-Supreme Leader Ayatollah Ruhollah Khomenei — to wage Jihad against American interests. 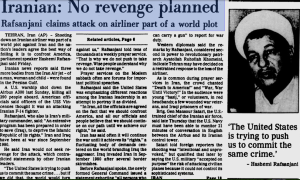 During Friday Prayers shortly after the incident, Rafsanjani said: “The United States is trying to push us to commit the same crime…but if we did that, the world would turn against us. This is why we do not push to take revenge. Wise people understand why we do not take revenge.”

Rafsanjani also cleverly maneuvered to smooth over any conflict within the regime by emphasizing that the US was still a “common enemy”: “In Iran, all the officials are agreed that we should confront America, and all our officials and people believe that we should continue on our path until we achieve our rights.”

Although he spoke those words in 1988, Rafsanjani’s reminder — both of his non-violent approach with diplomatic challenge rather than military confrontation, and his willingness to stand up to the Supreme Leader on this issue — are more than a strong hint of his current intentions.

In a speech on Tuesday, Rafsanjani reinforced this. He said that the next administration would “take practical steps” and adopt a foreign policy based on “real interaction” with the world in order to curb the effects of “illogical sanctions imposed by the West on ordinary citizens”.