Iran, July 13: US Holds Line on Nuclear Talks “Onus Is on Tehran”

In a conference call with journalists on Friday, a “senior US administration official” held the line on Iran’s nuclear programme, saying Washington noted the “positive tone and remarks” of President-elect Hassan Rouhani but looked for “actions that indicate a desire to deal seriously”.

Tehran and the 5+1 Powers (US, Britain, Russia, China, France, and Germany) are expected to meet this autumn, their first high-level discussions since April.

Both February and April negotiations in Almaty in Kazakhstan brought no advance on key issues like Iran’s enrichment of 20% uranium, recognition of the Islamic Republic’s right to enrich, and the widespread US and European sanctions on Tehran.

The US official spoke ahead of a meeting of the political directors of the 5+1 Powers on Tuesday.

The official — possibly Wendy Sherman, the lead US negotiator in the talks — said the 5+1 Powers are likely to ask Iran to give a “concrete response” to a “confidence-building proposal” put forward in February, rather than make any modified or new offers.

However, the official emphasized that the proposal was not “take it or leave it”, but open for negotiation. She also offered a general endpoint: “We already said to [the Iranians]…we do believe that Iran has the right to a peaceful nuclear energy program under the NPT [Non-Proliferation Treaty] once it meets its responsibilities. And all sanctions will be lifted if and when it has met its responsibilities.”

The US official continued, “We are open to direct talks. We think they would be valuable. I think they know that. We will reinforce that in any appropriate way we can.”

However, she reiterated, “What this is really about is, the onus is on Iran, to give us some substantive, concrete response.”

The official also concluded with a downbeat portrayal, even under a new President: “Rouhani may appear to be a moderate, but he still very much represents a conservative regime. And the nuclear file very much remains in the domain of the Supreme Leader. Will he have more space on the nuclear file? That remains to be seen.”

Since Friday, when a student at Tehran University wants to log into her or his personal university account, a page appears with the title, “Regulation on Clothing in Tehran University”. The student cannot get past the page until he or she confirms that the regulations will be followed. 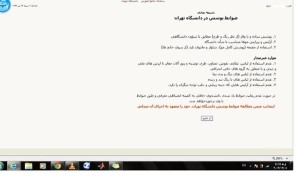 Harakat Ansar Iran, a Sunni separatist group based in Iran’s predominantly Sunni province of Sistan and Baluchestan have claimed that they successfully carried out an attack in the southern port city of Chabahar on July 9.

Iran has claimed that the attack was foiled by its security forces, who managed to shoot dead the would-be suicide bomber.

HAI’s Arabic-language social media spokesman — who tweets in Arabic under the name of HAI’s leader, Abu Hafez Al Baluchi — said Saturday that Iranian security forces were using helicopters and ground forces to comb the area around Chabahar, a sign that Iran incurred losses in the suicide attack.

Earlier, HAI’s spokesman said that by targeting Chabahar twice in eight months showed that Iranian intelligence was fragile without external cooperation, and that frequent operations by HAI against Iranian forces have proved that the Iranian government cannot protect its armed forces or economic assets:

The HAI spokesman noted Chabahar was very important not just to Sistan and Baluchestan but also to Iran as a whole:

The July 9 incident is the third attack on Chabahar by Sunni separatist groups in in three years. In October 2012, a suicide bomber blew himself up outside a mosque. HAI claimed responsibility.

As HAI’s spokesman made sure to point out, the attacks on Chabahar do more than just upset Iran’s security forces and destabilize the region internally. Chabahar is important to Iran’s faltering economy and the attacks damage Tehran’s ability to attract foreign investment to develop the Chabahar port. The July incident comes as India has expressed interest to Iran about potentially investing heavily to develop Chabahar port, which is just 72 kilometers from Pakistan’s Gwadar Port. China has also expressed a potential interest in developing Chabahar.

Two weeks ago, Fars News — close to the IRGC — reported comments by India’s Minister of External Affairs, Salman Khurshid, who said that India was considering developing Chabahar to allow India greater trade access to Afghanistan, Uzbekistan and Tajikistan, as well as to Russia, southern Europe and the Caucasus.

Judiciary Official on “Tolerance”: “System Always Has Its Red Lines”

In any form, the tolerance level of administrations is sometimes more and sometimes less. Some administrations are moderate and some are extreme. Of course, the system always has its specific red lines and will confront based on that.

Mohseni Ejei said that MPs, responding to allegations of abuse and poor conditions, had visited Evin Prison for the second time, inspecting the performance of female prison personnel and holding face-to-face discussions with detainees.