Syria Today: The War on the Economy 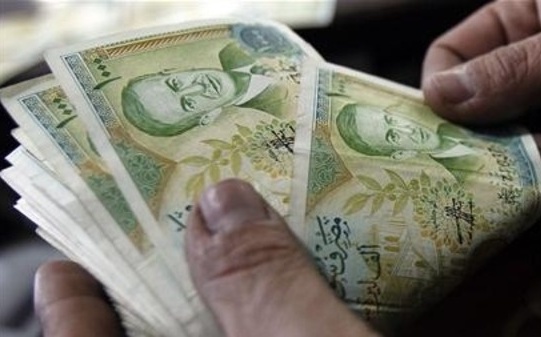 Another sign on Wednesday of the economic pressure on the Assad regime, as Prime Minister Wael al-Halqi pronounced “that the government has taken a number of measures to confront the unfair economic, media sanctions which target the national economy structure and the Syrian state, calling on the Syrian people and government to face this unjust war”.

The statement was the second in three days by al-Halqi, who insisted earlier this week that the Government had sufficient reserves to provide for the Syrian people, following a 25% fall in the currency in 24 hours.

The Syrian regime is subject to a sweeping range of sanctions, led by the US and European powers, trying to limit its trade, financial sector, and resources. This week, Iran and Syria agreed on a $3.5 billion line of credit and assistance with energy and infrastructure projects to help sustain the economy

“The government works on all levels to confront the aggression against the Syrians by mercenary terrorists who are backed by some international and regional powers,” al-Halqi said during a meeting with representatives of firms in Aleppo — Syria’s largest city which has been split between the regime and insurgents since July 2012.

Insurgents have cut access to a Kurdish area in northern Syria, clashing with fighters from the Kurdish nationalist PKK.

Fighting erupted overnight on the edge of Ifrin near the Turkish border, sources on both sides said. Four people were killed, bringing to at least 30 the death toll from battles and assassinations in the last few days. Dozens more have been taken in tit-for-tat kidnappings.

Accusing PKK fighters of supplying the two villages, insurgents cut main roads from Ifrin to Idlib and Aleppo Provinces this month, causing prices of basic goods in the town to soar. Kurdish farmers are also struggling to market their crops, the sources said, with opposition fighters extorting high fees at roadblocks.

“Ifrin has been sympathetic to the revolution but the rebels are not serving their cause by what they are doing,” said Abboud Hakim, a retired government official in the twon. “They accuse the PKK of delivering supplies to [nearby regime-controlled villages of] Nubbul and Zahra when they themselves let trucks go there if they pay them at the roadblocks,” he said.

Under the deal between the FSA and the Kurdish Protection Units, the siege on Ifrin was to be lifted on Wednesday and both sides were to have freed their prisoners.

However, An opposition source in northern Syria said the ceasefire deal had little effect because Colonel al-Sheikh had only limited influence on the brigades which hold sway on the ground.

The PKK, the source said, also seemed to have little interest in the deal, especially after Arab reconciliation delegates sent to Ifrin were reportedly killed a few weeks ago.

The Syrian National Coalition warned on Thursday that 40,000 civilians in the Damascus neighborhoods of Al Qaboun and Al Barzeh are at risk, with food and medical supplies running low following six months of sieges and military checkpoints.

In a statement, the Syrian Coalition called on the international community to intervene, saying it feared these two areas would be raided by Assad’s forces, “which will lead to another massacre. These continued massacres by the Assad regime are committed to suppress the revolution for freedom”.

France: More Talks With Insurgents Before We Supply Arms

French Foreign Minister Laurent Fabius has damped down talk of overt supply of arms to insurgents, “As far as weapons go, there is no question of delivering weapons in conditions that we aren’t sure about and that means we won’t deliver weapons so that they are turned against us.”

Fabius continued, “It’s one of the reasons why we need more consultations with General Salim Idriss who is the commander on the ground.”

Last week, at a meeting of the “Friends of Syria” international coalition in Ankara last week, diplomats and intelligence officers discussed insurgents’ needs — including anti-tank and anti-aircraft weapons — with General Salem Idriss, the head of the opposition’s Joint Military Command. Ministers of the Friends of Syria countries convene in Qatar this week.

Footage of insurgents from the Gharba As-Sham Front in Aleppo using homemade rockets on Thursday to shell regime forces in the Midan Neighborhood.

This video, slightly different, notes that the rockets are home-made.

This video shows clashes between insurgents and regime forces in Aleppo’s Sheikh Maqsoud neighborhood on Thursday afternoon as part of Operation Hurricane of the North, an offensive against Assad’s forces in the city and its surroundings. The neighborhood, a residential area, appears empty of civilians. Insurgents on Wednesday warned residents of regime-controlled areas to leave ahead of the offensive.

The video below shows a statement by Free Syrian Army insurgents on Wednesday announcing the start of an offensive — Operation Hurricane North — “to liberate Aleppo from the brutal oppression of the regime and the Party of Satan and the Safavid militias [the insurgent name for Hezbollah.]

The statement lists the insurgent factions who will take part in the offensive, including: Al-Majd Brigade, Brigade of Sultan Mehmet The Conqueror, Seljuk Brigades, Falcons of Islam Brigade, Dara Souriya Brigade, Mujaheddin Brigade.

The FSA warned civilians in areas of Aleppo controlled by the Syrian regime that there would be clashes, and urged them to leave the area so that regime forces would not use them as human shields.

A full list of the factions, in Arabic, is given below:

Lavrov: Russia Has Not Yet Fully Implemented Its S-300 Contract

“We fulfill all our contracts, and the contract has not yet been implemented to the end,” Lavrov told Russia’s “Rossiya-24” TV channel.

A mortar shell from Syria hit the Golan Heights on Thursday, Israel’s Channel 2 reported. An IDF patrol neutralized the shell and there were no casualties or damage to property.

Hezbollah’s entry into the conflict was creating tensions in Lebanon, Sleiman told Lebanese daily As-Safir , noting that if Hezbollah fought in Aleppo and there were more Hezbollah deaths, those tensions would increase still further.

Sleiman that he would “protect the Resistance, even against itself”, and that US President Barack Obama had recently expressed concern about Hezbollah’s involvement in Syria.

Sleiman also noted that Hezbollah deputy leader Sheikh Naim Qassem had slammed al-Mustaqbal leader Saad Hariri on Wednesday, saying that he was “seeking a political future through the US-Israeli project”, and accused him of supporting “terrorists” in Syria and Lebanon.

“We are not fighting for any group and we say it loudly that we are with the resistance. We are fighting in Syria to defend the resistance,” he said.

Russian Foreign Minister Sergei Lavrov warned on Thursday that if the US and Europe supplies arms to Syrian insurgents, those weapons will find their way to Islamist insurgent group Jabhat al-Nusra.

“Jabhat al-Nusra is the most effective functioning structure of the armed opposition, and I have no doubt that the overwhelming majority of weapons that have already ended up in Syria, as well as those [weapons] that will end up in Syria, will be distributed via that structure,” Lavrov said, according to RIA Novosti.

Lavrov added: “[Jabhat al-Nusra] is the most coordinated, the most disciplined and our colleagues understand that.”

The Foreign Minister noted that the Syrian government had told Moscow that it would “support the outcomes of the G8 and emphasized its readiness to participate in the [international peace] conference.”

“So far, we just don’t know who will convince the opposition to do the same,” Lavrov added.

Insurgents attacked a main highway in northern Syria on Wednesday, trying to cut off a major supply line for regime forces in the region.

Opposition fighters claimed that they had taken three checkpoints on the Ariha-Latakia stretch of an international highway that goes through Syria’s biggest city, Aleppo, to the Turkish border. They say they needed to capture three more to cut off the Syrian military’s access to the M5 highway.

“This is a very important battle in our move to put a stranglehold on regime supply lines from its stronghold on the coast into the north, particularly to Idlib city, which is one of the regime’s last footholds in Idlib province,” said insurgent spokesman Mohammed Fizo.

“The regime is responding by shelling the highway and sending fighter jets to bomb nearby villages,” he said.

Insurgents Call For Weapons As Fierce Fighting Continues In Aleppo

Insurgents fighting Assad’s forces in and around Aleppo have said they desperately need improved weapons — including anti-tank weapons — to combat the regime.

This report from Al-Jazeera shows footage of insurgents saying they are making gains against Assad but that they are out-gunned:

This footage shows a tank shell falling on insurgents in Suleiman al-Halabi in Aleppo:

This footage shows older residents of the city taking part in the insurgency:

The Local coordination committees claim 96 people were killed on Wednesday, including 36 in Damascus and its suburbs, 26 in Idlib Province, and 13 in Aleppo Province.

The Violations Documentations Center records 64,057 deaths since the start of the conflict in March 2011, an increase of 51 from Wednesday. Of the dead, 49,270 are civilians, a rise of only three from yesterday.