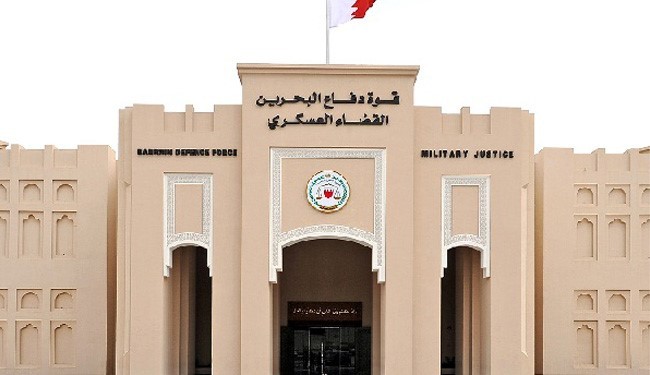 Three of the men were convicted in absentia.

One of the men was an 18-year-old opposition member, Akbar Ali al-Kishi, already sentenced to 16 years before Wednesday’s verdict. His family, claiming they were excluded from the hearing, said he faces up to 80 years in total because of other charges.

The Bahraini Center for Human Rights claims that al-Kishi, wounded in 2009 by security forces and also arrested in August 2010, was “tortured and forced to confess to crimes in addition to the existing list of cases pending against him”.

The verdicts come amidst a recent surge in the regime’s crackdown on opposition. Last week, authorities said they had arrested 44 people, many of them linked to the 14 February coalition, for Iranian-backed “terrorism” and crimes that included arson, bombings, and murder.

The Premier yesterday saluted the sacrifices made by Bahrain’s security forces in countering terror plots and sabotage.

On Wednesday, Prime Minister Khalifa bin Salman Al Khalifa — a focus of protests, demanding that he step down after more than 40 years in office — thanked the security forces for “maintaining order” and “ruled out dragging the country into undesirable clashes with saboteurs, rioters, or arsonists, who try to undermine the people’s interest”.

Palestine: Prime Minister Resigns After 18 Dayshas offered his resignation to Authority President Mahmoud Abbas, 18 days after taking office, according to an official in his press office.

The source told Reuters that Hamdallah acted because of a “dispute over his powers”.

It was not clear whether Abbas would accept the resignation by Hamdallah, an academic and political independent whose Cabinet met for the first time last week.

Hamdallah replaced economist Salam Fayyad, who resigned in April after six years in power marked by economic difficulties and rivalries with official of Abbas’ Fatah Party.

Since a brief civil war in 2007 between the Western-backed secular Fatah party and the Islamist group Hamas, Palestinians have had no functioning parliament or national elections.

Abbas exercises limited self-rule in the Israeli-occupied West Bank while Hamas, which won 2006 legislative polls, has its own prime minister in the Gaza Strip.

Beyond the Middle East: Scott Lucas with BBC on Afghanistan

Amid reports of the delay of talks between the US and the Taliban — primarily because of objections by the Karzai Government — EA’s Scott Lucas spoke with BBC West Midlands this morning about the political and military situation.

Lucas also told Voice of Russia why the Karzai Government may have pulled out of the Taliban talks:

Possibly they see themselves as being side-lined or possibly it’s a move for leverage.

The Karzai government will say: “Look, we’ll come to the talks as well, but there’s certain things we want to put on the table.”

What the Karzai Government does not want to happenis an agreement between the Taliban and other insurgent groups and the US, which would reinforce the withdrawal of American troops from the country — due next year — and really leave the Karzai government without any assurance it’s the dominant force in Kabul.

Turkey: Bust-Up Between PM Erdoğan and His Deputy?

Erdoğan allegedly objected to Arınç’s remarks on the demonstrations over the Government’s clearance of Istanbul’s Gezi Park. FArınç reportedly left the Cabinet meeting, saying that he would resign both from his post and leave the ruling Justice and Development Party.

When Arınç could not be convinced to return by other ministers, Gül reportedly stepped in.

As Erdogan was abroad on a five-day trip just after the start of the mass protests on 31 May, Arınç adopted more reconciliatory tone about the demonstrations in Istanbul and across the country. He met with Gül about the protests and then held a news conference during which he apologized for the undue and disproportionate force used by police against the peaceful protests.

In recent days, Arinc has taken a harder line, warning that the Army could be summoned to maintain the dispersal of protesters after they were cleared from Istanbul’s Taksim Square and Gezi Park last weekend.