Syria Today: Protests, Rather than “Regime Offensive”, in Aleppo 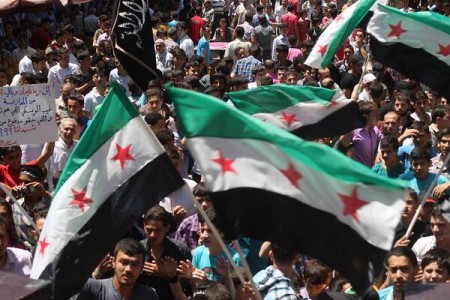 For days, mainstream media have been featuring the “news” of a Syrian military offensive to re-claim all of Aleppo — based on little more than the assertions of the Syrian Observatory for Human Rights and of claims by the pro-regime outlet Al-Watan and Hezbollah’s Al-Manar media.

While shelling of insurgent-held neighbourhoods in Syria’s largest city continues, there has been no sign of a major assault on the ground.

Instead, Friday was distinguished by a far different type of gathering: mass crowds chanting for the opposition and against the regime. Videos and pictures in areas such as Salaheddin and Sakhour showed rallies maintaining defiance, 27 months into the conflict and almost a year after Aleppo was divided by the first entry of insurgents into the city.

Both Syrian State media and insurgents reported clashes in Daraa and its surrounding countryside on Saturday, as the Syrian Army shelled several locations.

State news agency SANA reports that a Syrian Army unit targeted “armed terrorist groups in the national Hospital surroundings, killing a number of terrorists and injuring many others, among the killed was Ziyad Ahmad al-Rashid al-Masalmeh.”

SANA say the Syrian Army also attacked al-Hrak, al-Mazairib (clashes in this village are also being reported by activists) and al-Naema villages.

Activists reported that several areas of farmland near Izraa, north of Daraa city, were torched during artillery shelling. This video shows footage of the fires:

This video shows the Ababil Hauran Brigade in a clash with “Assad’s Shabiha” on Saturday:

Activists also reported heavy regime shelling in al-Mazairib, north of Daraa city and close to the Jordanian border; in Jallin, northwest to al-Mazairib, with clashes between the FSA and regime forces at the Jallin checkpoint; Adwan and Busra.

This video, posted earlier today by the Capital Shield Brigade in Harasta, a northeastern suburb of Damascus, purports to show a group of defectors from the Republican Guard, an armored division of the Syrian Army; the elite Fourth Armored Division; and the Electronic Warfare Division.

How Many Military Officers Defected?

202 Assad military members crossed to Turkey this morning, including 73 officers of which 7 are Generals.

What Weapons Will The US Supply To Insurgents? It Depends Which Officials You Ask.

In the wake of reports on Friday that the US has agreed to supply arms to Syrian insurgents, there remains confusion over which weapons will be supplied and whether the US is backing the creation of a no-fly zone.

The FSA have said that they have a desperate need for anti-tank and surface-to-air missiles to counter aerial attacks from regime warplanes and Russian-supplied helicopter gunships.

However, while the Wall Street Journal reported that the US was unlikely to provide MANPADS to insurgents,

Officials say European allies have expressed a willingness to provide Manpads and potentially other heavier weapons sought by rebels.

So the US is opposed to MANPADS but the Europeans may be more willing to supply them?

Not so, according to officials Reuters spoke to, who said definitively that the weapons insurgents will receive:

will not include shoulder-fired surface-to-air missiles known as MANPADs that could bring down Syrian military planes and helicopters.

“European officials and others with close knowledge of the situation” told Reuters that:

OK, but what about the no-fly zone? Do officials agree on what shape that might take?

While the Wall Street Journal cites US officials as saying that the US proposals include “calls for a limited no-fly zone inside Syria that would be enforced by IS and allied planes on Jordanian territory”, Reuters speaks to European officials “and others with close knowledge of the situation” who say this:

And for now, Washington is not backing the establishment of a “no-fly zone” over Syria, which would involve a major commitment of U.S. and European air power to counter Syria’s extensive air defenses, they said, in part because there is no international consensus on the step.

Gatilov held the armed terrorist groups and the Al Qaeda-affiliated Jabhar al-Nusra responsible for the murder of 60 people in the village of Hatla in Deir Ezzor, calling on mass media and human rights proponents to give proper attention to this massacre.

Via his Twitter feed, Gatilov said that the aforementioned massacre which claimed the lives of 60 people, some of them women and children, was committed by armed groups who are also responsible for displacing Christians from Sednaya.

In fact, Gatilov did not mention Jabhat al-Nusra, instead referring only to “militants”.

The Local Coordination Committees claim 58 people were killed on Friday, including 24 in Damascus and its suburbs and 13 in Aleppo Province.

The Violations Documentations Center records 63,637 deaths since the start of the conflict in March 2011, an increase of 78 from Friday. Of the dead, 49,025 are civilians, a rise of 51 from yesterday.

US Officials Back Away From No-FLy Zone

Hours after The Wall Street Journal published news from US officials that plans for a no-fly zone in southern Syria were being considered, others in the Obama Administration publicly backed away from the idea.

[A no-fly zone is] dramatically more difficult and dangerous and costly in Syria, for a variety of reasons.

“I think people need to understand that the no-fly zone is not some type of silver bullet that is going to stop a very intense and, in some respect, sectarian conflict,” Rhodes said, stressing though that Washington was not ruling out options, some strategic approaches would not work.

We don’t at this point believe that the US has a national interest in pursuing a very intense, open-ended military engagement through a no-fly zone in Syria at this juncture.

Susan Rice, the incoming National Security Advisor, also took a cautious line: “That option has some downsides and limitations that we are very well aware of and will factor into any decision.”

On Friday, the Journal featured the comments of officials that the US had plans for a 25-mile no-fly zone in southern Syria, enforced by American aircraft at Jordanian bases. At the same time, The New York Times — again fed by American officials — headlined that the Obama Administration has decided to publicly arm the Syrian insurgency.