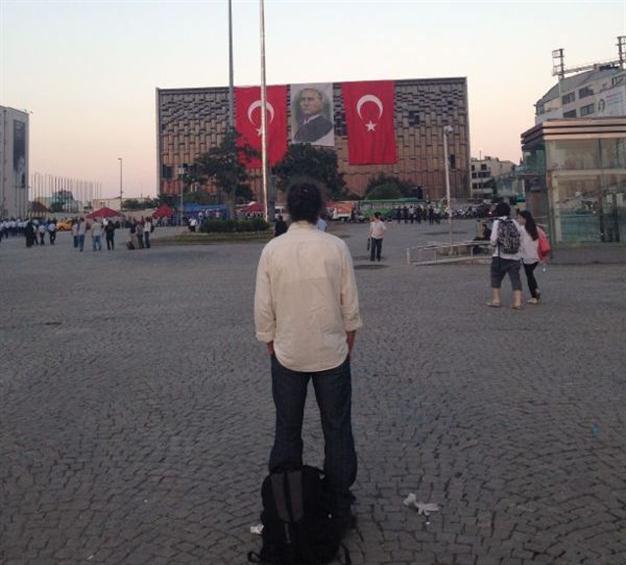 After 18 days of mass protest against the Turkish Government, sparked by plans to re-develop Istanbul’s Gezi Park, Monday’s headline was grabbed by a solitary act of defiance in nearby Taksim Square.

Gündüz remained for six hours until he and a group that joined him in the silent stare were briefly detained by police.

Meanwhile, the Government, after its securtiy forces cleared Taksim Square and Gezi Park last weekend, continued its challenging rhetoric. Prime Minister Recep Tayyip Erdoğan accused European powers of being “undemocratic” in their criticism of his handling of the protests: “You [the European Union] do not respect democracy. Your definition of freedom is different. You support those who attack the freedom of others.”

Erudogan’s deputy, Bulent Arinc — who had been conciliatory earlier in the protests — warned demonstrators that the Army might be summoned to halt them:

Arinc replaced his earlier admission of “excessive” use of force by the police with the declaration, “They [the police] will use all the authority given to them. Nobody should complain about the police.” He claimed those who criticize the police are the people who vandalize cities.

The toll from two suicide bombs at a mosque in Baghdad is now at least 32 people killed, with more then 50 injured/

The bombers detonated themselves during prayers around midday at the al-Husseiniyah mosque in al-Qahira district.

The Strong Egypt Party, led by moderate Islamist Abdel-Moneim Abul-Fotouh, has said that it will participate in anti-government protests on 30 June and will call for early presidential elections.

The party issued a statement saying “We are afraid that Egypt’s army will slip into political dilemmas, or that a civil war could break out between those competing for power.” It adds that President Morsi and the Freedom and Justice Party had “diverted long ago from the aims of the 25 January revolution… Instead, they focus on fulfilling their own goals, which do not coincide with the revolution’s aims.”

The statement also criticised the Morsi government’s repressive nature and the lack of meaningful reforms. It continued:

There are question marks on where the report of fact finding committee went [submitted in January to the president and the prosecutor-general] that has details on the killing of protesters during the 25 January 2011 uprising and events in its aftermath… Not only that, but more protesters have died [under the current regime]… This has caused a major disappointment for the Egyptian people who are already suffering from lack of security and economic crises.

A suicide bomber has killed at least 7 people and wounded 20 others at a Shi’ite mosque in the al-Qahira district of northern Baghdad.

The daily newspaper, Today’s Zaman, picks out some of the lighter moments of the ongoing anti-government protests, in order to show the “humorous side to what is taking place, with the core of the Gezi Park protestor’s use of humor in their uprising.”

The Gezi Park protestors have received a show of support from some of the country’s CEOs, who also criticised the Erdogan government’s response to the protests.

Of 137 CEOs questioned by Turkish weekly economy and business magazine Ekonomist, 90 per cent found the protestors’ claims to be justified and 58.4% said the starting point of the protests was “a reaction to many policies of the Turkish government.”

When asked to assess the government’s management of the crisis, 92 per cent gave a score of 5/10 or lower, while 53 per cent gave it 1/10. The CEOs added that unless the crisis is resolved, the tourism sector will be most negatively affected as would the economy due to a slowing down of foreign investment.

Housing Minister, Uri Ariel, has said that Israel has frozen nearly all new housing construction in settlements in the West Bank and East Jerusalem in order to aid efforts by US Secretary of State John Kerry to revive peace talks with the Palestinians.

Ariel said, “I’ll give you the facts: in Jerusalem, since the beginning of the year, there have been no tenders except for one … and the same goes for Judea and Samaria [the West Bank].”

The announcement has been rejected by the Palestinian Liberation Organisation, which issued a statement declaring “While such statements are made to placate Secretary Kerry, the fact remains that settlement activity has continued unabated under successive Netanyahu governments.” Last week, officials said Israel is planning the construction of 1,000 new homes in two West Bank settlements.

The Israeli anti-settlement Peace Now group also pointed out that the development has had no impact on construction already underway. Ariel, a member of the pro-settler Jewish Home party, added that he believed the step was temporary and that he was working to end it.

Turkey: Government to Consider Protestors Either “Supporter or Member of a Terror Organization”

In a televised interview at the weekend, Turkey’s European Union minister, Egemen Bağış, declared that all those who continue to protest will be considered by the state either a “supporter or member of a terror organization.”

According to the minister, “The protests from now on will play into the hands of some separatist organizations that want to break the peace and prioritize vandalism and terrorism.” He also blamed foreign media — particularly the BBC and CNN — for damaging Turkey’s image with continuous footage of the protests, motivated by their own financial concerns.

Bağış claimed “International channels such as BBC and CNN never do such broadcasting without any advertisement. Somebody somehow financed these broadcasts. Like our prime minister said, the losses of the interest rate lobby due to low interest rates have exceeded $650 billion in Turkey. This drives them crazy and they are doing everything to disturb the calm in our country and win back their losses.”

Renowned Turkish-German director, Fatih Akın, has appealed for a halt to the use of excessive force against protestors in an open letter to President Abdullah Gül.

Akın, who directed the 2004 Berlin Film Festival Golden Bear winner film “Head-On,” wrote, “I call out to the ones with conscience; stop this violence.” The director listed a number of examples of excessive force — police firing pepper spray in closed spaces; detaining “as terrorists” the volunteer doctors who helped wounded protestors; a 14-year old child su ffering from a cerebral haemorrhage due to a gas bomb capsule shot by police — and stated “Police are intervening with tons of tear gas, gassed water, rubber bullets, without differentiating among people.”

Not long, ten years ago, you and your party fought for your fundamental rights and freedoms… Shouldn’t you be the one who understands this society the best?… I don’t want to think that you have removed your conscience shirt like the others who have put on the governing shirt. I call out to the ones with conscience; stop this violence!

Turkey: 193 Detained After Raids in Istanbul and Ankara

Dozens of people have been detained following raids by anti-terror security teams at their homes in Istanbul and at 26 addresses in Ankara this morning.

The offices of the Atılım Newspaper and Etkin News Agency in Istanbul were also raided; those detained are currently being held at the police department at Istanbul’s Vatan Street. According to the Peace and Democracy Party (BDP) deputy, Sırrı Süreyya Önder, around 70 people were detained. These included Alp Altınörs, a member of the Socialist Party of the Oppressed (ESP) as well as members of the outlawed Marxist-Leninist Communist Party (MLKP).

It is thought that at least 193 people have been detained today in Istanbul alone; 22 people were accused of “organizing violent protests and calling on people to attend illegal demonstrations” and are expected to be interrogated for up to four days.

The Justice Ministry began work yesterday on a draft law concerning internet-based crimes, in an extension of the government’s crackdown on social media.

The Interior Minister, Muammer Güler, reiterated the government’s stance on the use of social media, which has been instrumental in organizing demonstrations against Prime Minister Erdogan across the country. Güler said “We have a study on those who provoke the public via manipulations with false news and lead them to actions that would threaten the security of life and property by using Twitter, Facebook or other tools of the social media.”

The Minister acknowledged that a number of people in Izmir have been detained because of tweets they sent during the protests. He added, “Still, we think that the issue needs a separate regulation.”

Badawi is the founder of “Saudi Arabian Liberals”, an online forum for political and social debate.

Badawi was charged over a series of his articles, including one about Valentine’s Day for which he is accused of ridiculing the Commission on the Promotion of Virtue and Prevention of Vice. He is also charged for failing to remove articles by other authors, including one that insinuates that Al-Imam Mohamed ibn Saud University had become “a den for terrorists”.